No Comments
Newsweek is doing a double-track,

Newsweek is doing a double-track, opening-round trashing of The DaVinci Code. That is, reporting that people around town (i.e., Newsweek‘s sources) are trashing Tom Hanks‘ longish, vaguely unwashed-looking hair in the film, and then going, “Tsk-tsk…those sources sure are shallow, but it’s fun to report on what they’re saying!” And here I am doing the same thing, dinging Newsweek a bit but at the same time spreading the bad word about Hanks’ hair. And I don’t even see anything wrong with it. A little long in the back, a little unkempt…so what? The guy’ has to wear the same You’ve Got Mail haircut in film after film? And yet I agree that Hollywood’s “favorite parlor game” is “trying to put a dent in a rival movie’s prospects by quietly trashing it.” And I love this quote from a studio executive in the Newsweek piece: “People are really trying to sabotage each other. It’s not a sport anymore…it’s a science.” 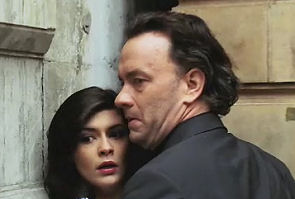 Don’t get me wrong — I understand the need to trash The DaVinci Code. Like I said earlier today under that photo of that big fat DaVInci billboard, I can feel the urge building without really knowing why. Okay, here’s why: book too successful, ads too big, Tom Hanks and Audrey Tatou running everywhere and always holding hands and always frowning, too much money likely to be made…Ron Howard, Dan Brown, Brian Grazer…that dead naked bald guy on the floor…Alred Molina sneering and hamming it up…you just wanna throw a spitball at all of ’em. Consider this snapshot of DaVinci costar Ian McKellen , which I feel speaks volumes. I mean, it seems as of this photo is the movie…y’know? 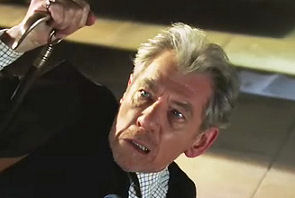 Speaking of Hollywood’s favorite parlor game, I’d say right now that Tom Cruise is against the ropes and has a cut over his left eye, and that the industry crowd is starting to get a little bit excited at the possibility of seeing him hit the canvas, or at least watching him get slugged so many times he goes all wobbly in the knees. And yet Mission Impossible III (Paramount, 5.5) is paradoxically hanging in there , if for no other reason than the fact that people are hot for Phillip Seymour Hoffman‘ s bad-guy performance and, to a lesser extent, are up for what might happen with J.J. Abrams at the helm.

No Comments
I missed this when it

I missed this when it went up last Wednesday, but Steve Berry does a this-and-that column for the Columbus Dispatch, and the 4.12 edition has the following Tom Cruise items: (a) a “Quote of the Day” in which a “Paramount Pictures insider” comments about an “audience reaction” to a Mission: Impossible III test screening, to wit: “There’s a scene where Tom (Cruise) gets beaten up pretty badly. And the test audience clapped…it was kind of weird“; and (b) “In a new poll at Parade.com, 84 percent of respondents blame the media for the negative publicity that Tom Cruise has received during the year since he began squiring Katie Holmes.” Don’t these items kind of argue with each other a bit? And what’s the origin of the alleged test screening story? Why didn’t Berry say when and where it allegedly happened, and who reported the comments of the alleged “Paramount Pictures insider”?

This is among the most Quixotic and futile things I’ve ever said in this column, but I genuinely believe there are metaphors of rot and doom and a swirling toiled-bowl fate contained in the popularity of the Scary Movie series, with the latest permutation having made just over $40 million this weekend. I know what I sound like in saying this, but will somebody who’s seen this latest bucket-of-urine, dumb-ass David Zucker movie please explain what it says about the kids going to see it that betokens any interior traits other than smugness, intellectual sloth and a profound aversion to anything the least bit exotic? What is a Scary Movie experience, sight unseen, other than an iron-clad guarantee that (a) you’ll be made to laugh or snicker every so often, (b) the movie will keep the subject matter in a totally safe, utterly familiar, channel-surfing vein and (c) it will throw audiences absolutely no curve balls whatsoever? More than anything else, Scary movies promise sameness and safety. If that doesn’t give you concern about where a lot of younger people are at these days then I don’t know what. Living in a membrane of smugness, material arrogance, and intellectual laziness is as much of a social malady as heroin, speed or alchohol addiction. They all indicate an attitude that says, “Leave us alone, dude…have a tub of popcorn and chill…we don’t know want to know.” I don’t know anything one way or the other, but I wonder what percentage of the kids who went to see Scary Movie 4 this weekend have personal discipline issues? Or have parents who drive big fat SUVs? I wonder what percentage of these kids are likely to see Al Gore’s An Inconvenient Truth when it opens in May? Two percent? One percent? Less? Everyone seeing Sofia Coppola’s Marie Antoinette next fall will be asked to consider the parallels between the arrogant, insulated attitudes of those living in the rarified environs of the palace of Versailles in the 1780s and those rolling in affluence today and the faux– Paris Hilton attitudes and personalities that always arise from this. Most people who see Coppola’s film are going to wave such thoughts away (if the parallels in fact occur to them), and you know who will be the first in this group to do so.

“I wrote a story last summer [for the Toronto Star] about Tom Cruise that sparked a lot of email and walk-up conversations from women. Every single one of them, young and old, said they no longer liked Cruise. Many expressed the belief that he’d gone crazy. It was surprising to me how firm and how consistent they were in their opinion. I’ve talked to many women since, and their view of Cruise hasn’t mellowed one iota. He’s damaged goods as far as women go, while men never had that much time for him anyway. I find off-the-cuff reactions from people to be a much better judge of things like this than so-called experts or bogus surveys.
It’s that magical thing called ‘buzz,’ and it cuts both ways.
It’s going to be very interesting to see how M:I:3 does. It will have to attract a sizeable number of women — those guys all need dates — if it is going to do socko numbers.” — Peter Howell, critic and feature writer, Toronto Star

So what’s the deal with the extremely low profile apparently being sought by the makers and promoters of The Celestine Prophecy (Celestine Films), which is opening on 4.19 in San Francisco, and then in Seattle, Austin, Boulder, Berkeley and other mid-size cities later in the month? Based on James Redfield‘s famous best-seller, directed by Armand Mastroianni and costarring some good and respectable actors (Matthew Settle, Thomas Kretschmann, Sarah Wayne Callies, Annabeth Gish, Hector Elizondo, Joaquim de Almeida, Jurgen Prochnow), Celestine is a film about spiritual matters, to go by the trailer. It may be a piece of shit, but you’d think it would appeal to the people who liked What The Bleep Do We Know?. It’s not a hardcore born-again or Jesus flick in the Passion of the Christ vein, or even one about conventional faith or religion, but it’s clearly one of the many films coming out this year that are aimed at spiritually-minded moviegoers. And yet it wasn’t even mentioned in Scott Bowles‘ 4.14 USA Today piece about these films, nor was it mentioned in the sidebar that listed all the spiritual-religious films opening this year. Publicist Corinne Bourdeau of 360 Degree Communications says that a specal Celestine Prophecy screening will happen in Los Angeles on May 2nd, and that film will eventually play in New York. She says that “quite a few distributors wanted it but we wanted to go a non-traditional route,” meaning, in part, that “we haven’t reached out to reviewers.” The likely translation is that they know they’ve got a movie that’s going to get creamed by the big guns so they’ve decided to play to all the New Agers out there and, for now, bypass mainstream entertainment journalists and the the usual New York/Los Angeles launch strategy. Bordeau says the film is “going to speak to a broader audience” than the kind who usually read the New York Times or the trades or smarty-pants online columnists like myself. Celestine had a showing not too long ago in Los Angeles, she says, at the Agape International Spiritual Center in Culver City. This smells like a huge problem movie because even if you’re looking to reach people outside of the L.A.-N.Y. axis there’s no downside to opening in those cities unless (a) you’re broke or (b) there’s a likelihood your film is going to get critically butchered. I’m interested in this film because I know Settle, having sat down with him for a long chat once in ’04 at the Farmer’s Market about a short film I’d written.

“There have been three actors in Hollywood history that I can think of …Douglas Fairbanks, Burt Lancaster and Jackie Chan…who’ve done their own stunts, but they all had either a natural facility or training of some kind. I think that for Tom Cruise to announce that he’s doing his own stunts on Mission: Impossible 3….for a movie star of his calibre to do this, that can only come from a wild insecurity on his part.” — “name” guy who likes anonymity

This sound file is taken from the opening five or six minutes of HBO’s Too Hot Not to Handle, a global warming doc that will debut at 7 pm on 4.22 — “Earth Day.” It’s smart, absorbing…a very thorough rundown explaining how bad things have been getting, and how much worse they’ll get if we don’t do something about C02 emissions and greenhouse gases.

Mel Gibson‘s Apocalypto (Touchstone), an ancient-history metaphor piece about a civilization destroying itself, has abandoned its August 4 release date and will now open on December 8. So either Gibson and Disney distributors have decided Apocalypto has year-end awards potential, or they didn’t like the idea of opening in the same late-summer period as Oliver Stone‘s World Trade Center and Clint Eastwood‘s Flags of our Fathers, or they decided they need a lot more time to get it ready.

I guess I misheard that insider’s analogy between the Chicago Tribune‘s first-string film critic Michael Phillips and the recently deposed (i.e., downshifted to second-tier position) Michael Wilmington, so let’s try again. Phillips “is indeed an elegant writer, but I don’t think he and Wilmington are coming from the same aesthetic place. Wilmington runs hot and enthusiastic. Phillips runs cool and measured . Wilmington has lived and died for flickering lights in dark rooms his whole life. Phillips is more detached and analytical and a converted theater critic, albeit one with previous experience with movies as well, and is therefore more likely to reference real life than a Renoir film .”