I’ve been told that MCN’s estimate on Superman Returns numbers — between $3 million and $4 million late Tuesday night and just under $10 million on Wednesday — is wrong. I’m told SR took in a bit more on Tuesday (between $4 and $5 million), and that yesterday’s take was around $14.7 million for a so-far total of just under $20 million. 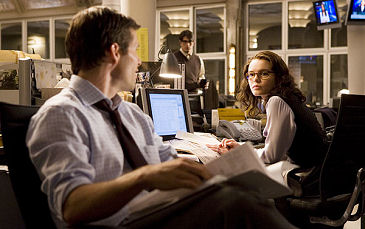 Warner Bros. will probably report a figure of just over $20 million, which obviously sounds flusher. (Since I wrote this earlier today, Variety‘s Ben Fritz went with a WB-supplied figure of $21 million.) The 7-day total (Tuesday, 6.7 through Tuesday, 7.4) is, I’m guessing, probably going to be around $100 to $110 million. Not drop-dead stratospheric but pretty good.

Slate asked a bunch of filmmakers to name the one film they’ve watched the most. Their special teddy-bear comfort film. I gotta hand it to Jake Kasdan for having the balls to admit that his teddy-bear film is Ghostbusters. I can’t decide on just one, but the list starts with Paths of Glory, closely followed by Lolita, Dr. Strangelove …you get the drift. Early Stanley Kubrick soothes like valium.

“The World Cup probably isn’t even on your radar, but on July 7th, two days before the final, Miramax is opening Once In A Lifetime , an incredibly entertaining documentary about the astonishing rise and fall of the New York Cosmos soccer team in the 1970s and ’80s. Founded on a whim by Time-Warner chairman Steve Ross and the Ertegun brothers, the Cosmos, for a too-brief period, boasted the talents of Pele, Franz Beckenbauer and Carlos Alberto, three of the biggest stars in the world. And they were selling out games at 77,000 seat Giants Stadium. And stars like Mick Jagger visited the locker room. And the team members were welcomed as VIPs at Studio 54. And by 1985, only eight years after Pele retired, the team was defunct. And now two Brit documentarians, Paul Crowder and John Dower, have turned this story into a very hip film on power, excess, stardom and the wild and crazy ’70s in New York. Once in a Lifetime has a great soundtrack filled with soul and disco music of the time, and plenty of tasty interviews with the parties involved. What makes it so great is also the fact that you don’t have to know anything about soccer or the Cosmos to enjoy it — it’s just flat-out entertaining and informative. A real winner.” — Lewis Beale

Good God…of course, of course! Rachel McAdams should have played Lois Lane in Superman Returns. Maybe Bryan Singer offered her the part and she passed or something got in the way. Given the reaction to Kate Bosworth so far, one imagines that Singer is probably wishing deep down he’d somehow gotten McAdams. Nothing on Google about this. Was she ever approached? She’s the friggin’ “it” girl. How could Singer not have wanted her? 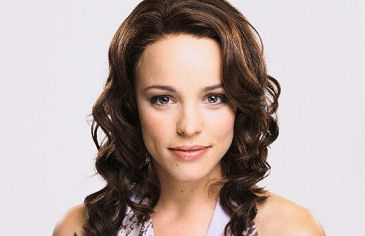 The ’06 Toronto Film Festival, which kicks off two and a half months from now, is going to be a kind of old-home week for anyone who went to Cannes. Alejandro Gonzales Innaritu‘s widely-praised Babel will be screened there…great. Ditto Ray Lawrence‘s Jindabyne, Ken Loach‘s Palme d’Or-winning The Wind That Shakes the Barley, Andrea Arnold ‘s Red Road and Aki Kaurismaki‘s Lights in the Dusk. Hey…what about giving Richard Kelly another shot with a new cut of Southland Tales? And what about showing Sofia Coppola‘s Marie-Antoinette for another round of whatever happens? (I was going to type the words “deeply loathed” before the title, but then I remembered that some people, including French critic Michel Ciment, stood up for it.)

41 Comments
Death of a Marine

Sincere regrets over the death of Marine Staff Sergeant Raymond Plouhar, who was featured in a sequence in Michael Moore‘s Fahrenheit 9/11 as he and another Marine went around Flint, Michigan, trying to recruit local youths. Plouhar, 30, was killed by a roadside bombing on Monday “while conducting combat operations in Iraq’s Anbar province”, the Defense Department said Tuesday. HE’s condolences to Plouhar’s family and friends. I’m sorry to report that as of 4:42 L.A. time, Michael Moore’s site hasn’t reported the news of Plouhar’s death…unless they’re hiding it somewhere. I don’t think is good form on Moore’s part.

Sorry…bunnies not funny. Blah, blah, blah…I got as far as the third paragraph. And you can’t read this unless you have a Wall Street Journal subscription.

Every online go-getter has been publishing that nude Britney Spears photo that will adorn the August issue of Harper’s Bazaar. I’m hours behind the pack (blame Superman Returns and James Ellroy) but no harm in following suit. 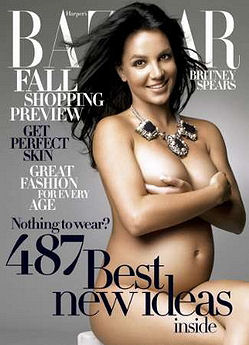 I’m guessing that sometime tomorrow morning an e-mail from an attorney for the magazine will arrive telling me to take it down or else…but maybe not. Remember when Spears was hot and thin? She’s obviously pregnant now, but during her recovery period from the last baby she was a sea lion.

I should have asked hard-boiled crime writer James Ellroy (“L.A. Confidential,” “My Dark Places”) the obvious question during his L.A. Film Festival appearance on Monday night at the Italian Cultural Center — what is his view of alleged wiretapper and hard-guy Anthony Pellicano, and particularly Pellicano’s declaration that he’ll never rat out his clients?
Knowing Ellroy as I do (i.e., only slightly), he probably would have called Pellicano a punk and a poseur, but I won’t know for sure until the next time. 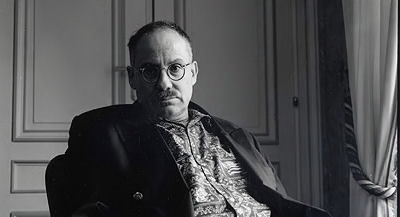 Crime-novel author James Ellroy, who’s shaved his moustache and lost a few pounds since the photo was taken five years ago.

The question I did ask was about the fictional plot of The Black Dahlia, Brian De Palma’s noir thriller based on Ellroy’s book of the same name. I was trying to get at the present-day interest among audiences in watching yet another fictional Dahlia tale on top of three or four cheapy TV movies plus Ulu Grosbard’s 1982 True Confessions**.
The Black Dahlia cow been milked too many damn times, and the teats are red and sore.
< ?php include ('/home/hollyw9/public_html/wired'); ?>
I’m especially convinced of this due to the fact that the “unsolved” murder of aspiring actress and troubled party girl Elizabeth Short has, to some people’s satisfaction (including my own), been solved.
Ellroy dismissed the “solve” as speculative on Monday night and he may be right, but read this 4.2.03 Washington Post article by William Booth about a book called “Black Dahlia Avenger” by former LAPD detective Steve Hodel, and go over all the disclosures and allegations and apparent facts.
When you’ve done that, convince me that Hodel’s father, a Los Angeles physician namd George Hodel, Jr., who ran a clinic treating venereal diseases (and who died in 1999 after leaving the U.S. and moving to Asia in 1950), doesn’t sound awfully damn guilty.
That’s right…Steve Hodel’s father. 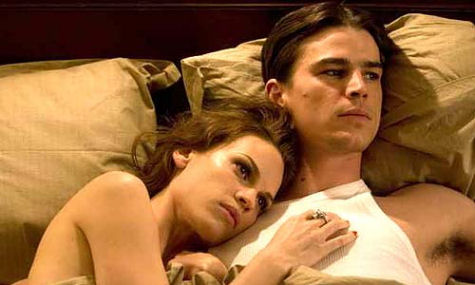 L.A. Times writer Larry Harnisch voiced another persuasive theory about a man he believes was the Black Dahlia killer (a surgeon named Walter Bayley) in Vikram Jayanti’s excellent 2001 doc James Ellroy’s Feast of Death. Read Harnisch’s site for the whole kit and kaboodle.
Ellroy wouldn’t discuss Bayley or Hodel on Monday night, I’m guessing, because notions of a solve would obviously drain the DePalma film of whatever allure it may have going in, and that would obviously lessen interest in people wanting to buy Ellroy’s fictional book about the case.
Another angle is the fact that Ellroy’s interest in cops, sex crimes and the seamy underbelly of Los Angeles stems in large part from the strangulation murder of his mother, Jean Ellroy, in 1958, when James was 10.
In the mid ’90s Ellroy published “My Dark Places,” a book about an unsuccessful attempt to solve her killing. The murderer was probably a guy she was seeing on some basis, but no final investigative score ever happened. I have an idea that because Ellroy doesn’t have closure on his mom’s death, he’s not comfortable with wrapping things up on Elizabeth Short. 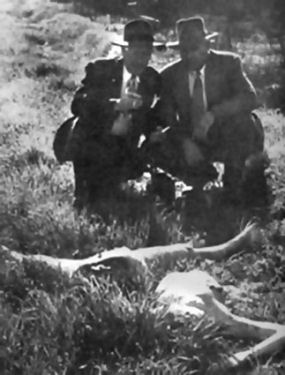 Universal’s The Black Dahlia, which costars Josh Hartnett, Aaron Eckhardt, Scarlett Johansson, Mia Kershner and Hilary Swank, is slated for release on 9.15.
Ellroy said on Monday night that he’s watched hours of dailies from DePalma’s film and said he would be doing promotion for it and, like with L.A. Confidential, that he’s fairly happy with the end result.
His favorite element in The Black Dahlia, he said, is Josh Hartnett, who plays a haunted cop named Bucky Bleichert who, along with partner Lee Blanchard (Aaron Eckhart), is assigned to look into Short’s (Mia Kirshner) grisly murder. (Her nude body was found in two pieces, sliced at the waist, on south Norton Avenue.)
Ellroy said, “Hartnett reads lines that I wrote with near perfect inflection every time.”
Ellroy is living in Los Angeles now, and that’s good. (I tried offering a link to a video piece about him discussing his return home while dining at one of his favorite haunts, the Pacific Dining Car, but it’s dead.) And he’s a lot slimmer these days than he was four or five years ago, and full of energy and in jolly spirits. 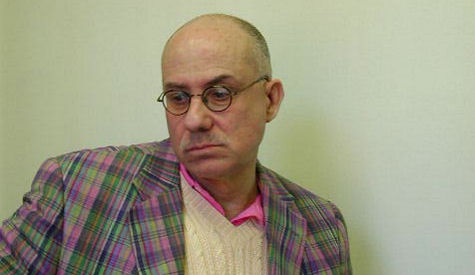 It was lot of fun listening to Ellroy’s well-honed shpiel the other night, although he’s not much of a conversationalist. Zap2it’s Hanh Nguyen has written a pretty good rundown of the highlights. You just need to scroll down a bit.
** True Confessions isn’t out on DVD by the way. What’s up with that?

“Isn’t it odd that Superman is here to save the world, but the things that end up threatening the world are elements he brought with him to earth? Isn’t it strange that a guy who could, perhaps, save the world, spends eight hours a day sitting around in an office where everyone is obsessed with celebrating him, and then a few hours performing a few random acts of rescue instead of addressing the world’s fundamental problems?” — excerpted from a response to the “Superman Again” feature, written by Looking Closer‘s Jeffrey Overstreet

A very curious decision has been made by the people at Taschen, at the request of Miami Vice director Michael Mann , to delay the release of what that big Taschen book about Mann’s career until sometime in the fall, instead of releasing it concurrent with Miami Vice‘s 7.28 opening, which is what the plan apparently was a few weeks ago. 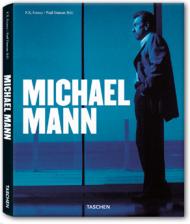 What could Mann’s motive possibly be? Does he want the Taschen book coming out at the same time as the Miami Vice DVD, which I presume will street sometime in November? The only other fall-release motive would be to goose awards consideration, but Miami Vice is not being seen, good as it may be, as an awards-level thing. What a shame, in any event. For me Miami Vice is the Big One to watch for, and I was so looking forward to leafing through this book (and through F.X. Feeney’s essay about Mann) sometime next month as a kind of anticipation exercise.