Baldwin’s “Webster” is Back

This isn’t news to readers of IMDB postings, but one of the all-time saddest orphans of Movies-in-Limbo Land — The Devil and Daniel Webster, which Alec Baldwin directed and costarred Anthony Hopkins, himself and Jennifer Love Hewitt — will be released in ’07 by The Yari Group, or roughly six years after this modern-day (hah!) rehash of Stephen Vincent Benet‘s story and Archibald Macleish‘s play finished lensing.

Look at the stills of Baldwin as he appeared while directing the film and compare them to how he looks today — he was a kid! Hopkins hadn’t made Hannibal, Red Dragon or The Human Stain when TDADW was shot, and Hewitt’s feature film career hadn’t yet gone into the crapper. It’s a pre-9/11 nostalgia movie. Here’s a YouTube trailer.
Yari apparently intends to release the film with Alan Smithee as the credited director, since Baldwin renounced it eons ago because his edit of the film was taken away and recut, apparently because the original jerkwater producers felt it wasn’t funny or commercial enough. Baldwin reportedly wanted a dramatic ensemble piece while the editors changed the tone and pacing and tried to hawk it as a comedy.
The original producers also apparently got into dutch for reporting fraudulent financial information to the IRS and therefater went bankrupt. The film had it’s premier in Florida in April 2004 at the World Cinema Naples Film Festival. A Beverly Hills company called My Own Worst Enemy Productions has apparently bought the rights (the movie is on their website — company rep Michael Golland didn’t call me back), and in turn has apparently pacted with Yari to get it into theatres. 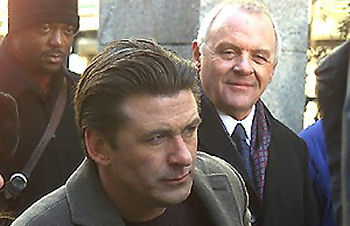 The plot’s about an unsuccessful writer (Baldwin) selling his soul to the devil (Hewitt) in exchange for fame and fortune. When his success isn’t everything he thought it would be he attempts to wiggle out of the deal, which leads to Daniel Webster (Hopkins) to defend him in a kind of cosmic court setting.
How bad is The Devil and Daniel Webster? It may actually be watchable. An IMDB poster has written there were three versions of this film. He saw the original and says it “left a lot to be desired.” But there were two more versions, one after Baldwin abandoned ship and the last one just before it was sold to Yari. The guy says “that the final cut, a half-hour shorter that the previous ones, is by far the best!” So it may be passable, but never trust anyone who uses exclamation points to convey enthusiasm about anything.
Webster was screened at the 2003 Cannes Film Market, and, acccording to the IMDB, opened commercially in Russia on 8.7.03. 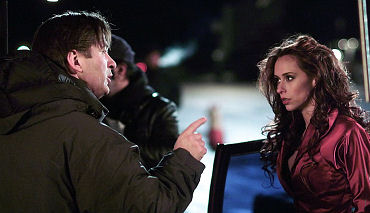