If the general critical barometer means anything, Flags of Our Fathers — despite the flaws, despite grousing from a few “name” critics, despite a director I know telling me that people who’ve seen it have been going “naah” — is going to wind up as a Best Picture Oscar nominee. The Academy doesn’t exactly look to film critics for guidance, but the Clint legend and Clint kowtowing are very powerful forces in this town, and critical huzzahs backing this up are always part of the dynamic. 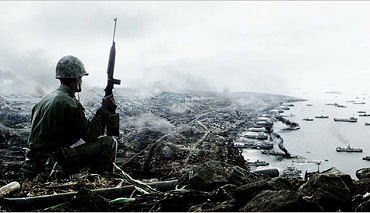 The Rotten Tomatoes and Metacritic averages for Flags of Our Fathers are about the same — 75% and 78% positive, respectively. One out of every four critics going “sorry, but not this time” doesn’t exactly constitute a mixed response, but it’s not anyone’s idea of a thundering critical consensus either. It basically means Flags of Our Fathers is no Million Dollar Baby.
One indicator is that within some the allegedly positive reviews, you’ll find some half-hearted statements. “The flaws in Flags of Our Fathers are at least partly attributable to Eastwood’s attempts to do too much,” wrote red-tomato raver Stephanie Zacharek of Salon. John Venabale of Supercalafragalistic.com, another supposed raver,says “it’s good, great in spurts, but overall leaves one longing for a story better suited for film.” L.A. Daily News critic Bob Strauss says that “making a movie like [Flags] is totally honorable, even pretty heroic. I just wish that it had moved me more.” Joshua Tyler of Cinemablend says Eastwood’s film “raises interesting questions about heroism and the uses of propaganda, but it left me hungering for more about the battle.”

Fact is, most of the unqualified raves are from the top-dog elite — Dargis, Turan, McCarthy, Puig, Roeper, Rea, Matthews — and I have a feeling that some of these critics are doing a subtle little dance. I’m not saying they’re shading or modifying their true opinions, but I know that Clint has a fraternity of film critic fans who are part of the faith and “on the boat” — and if you know anything about human nature you know we all like being on the boat rather than off it. I also know that almost every over-40 critic worships the Eastwood career metaphor (i.e., the older you get the better you get), and that admiration for an artist’s general body of work always slips into this or that particular review.