Every damn line of movie dialogue in this Independent piece about (i.e., composed of excerpts from) Paul Welling‘s “Sex, Lines and Videotape: Famous Film Quotes” (which isn’t even purchasable via Amazon.com) has been drilled into every movie lover’s head like the the basic ABC’s…over and over, year after year. We’re living in a fascistic culture.
What’s needed is a book of less-heralded movie dialogue that’s off the beaten path. Like Paddy Chayefsky ‘s “life is sensual, factual” speech spoken by James Garner in The Americanization of Emily…pretty good stuff, never quoted. Or this little Joe Pesci snippet from Raging Bull — whenever I think of this classic Martin Scorsese film I think of this line, I swear, and I laugh every time. Or this Pesci and DeNiro argument over supposed infidellity…great back and forth, and I’ll bet 90% of every pair of brothers or best friends have had a conversation like this at one time or another. 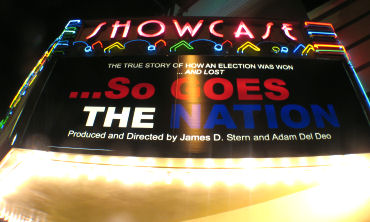 James D. Stern and Adam Del Deo‘s …So Goes The Nation, which explains in the frankest terms imaginable how the John Kerry campaign blew it in every way imaginable with the middle American voting public during the ’04 election and how cagey and brilliant the Bushies were at almost every turn, opened last night at the Regency Showcase on La Brea just south of Melrose. The last time I saw this film was in Toronto with a full house — last night’s 7:30 pm show was, shall we say, a wee bit under-attended. It’s a riveting piece all the same, but the vibe isn’t the same with a near-empty house.

I’m repeating myself but the Best Actor race is going to come down to Will Smith‘s end-of-the-movie crying card and struggling-single-dad uplift card in The Pursuit of Happyness (the film being a true story about a guy who was homeless and on the streets with his son but who turned things around when he became a financial trader) vs. Peter O’Toole‘s career-capping performance in Venus fortified with a three-point pitch: (a) he’s never won an Oscar, (b) he wuz robbed 41 years ago when his Becket performance lost out to Rex Harrison‘s in My Fair Lady, and (c) it’s now or never. That’s the shorthand. 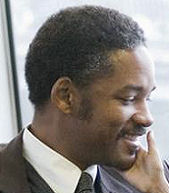 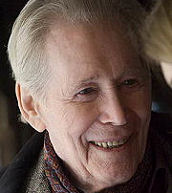 The previous Peter Howell/Flags of Our Fathers/Hannibal- at-the-gates piece will suffice if you want to post something about Clint Eastwood‘s film, but it would be really interesting to get as many reactions as possible about Flags. What people do and say this weekend in response to this film will, I think, largely decide if it becomes a Best Picture nominee.

Toronto Star critic Peter Howell went to a radio-promotion-with- a-smattering-of-critics screening of Flags of Our Fathers last Wednesday, and observed the following: “It was at the Paramount downtown, in a room with several hundred seats. I expected it to be a mob scene, as it often is at movie previews, but the theatre was practically empty when I arrived at 6:30 pm. When the movie started just after 7 p.m., the room looked only about half full. This for a movie that had been touted as a sure-fire Oscar nominee and likely winner.
“So what happened to the audience? The show had the usual radio-station push and free tickets. The only thing missing was the T-shirt giveaway, which would have been tacky for a film like this. I noticed a preponderance of people over age 40, including several elderly gents a few rows ahead of me who were quite likely WW II vets. The likely answer: Flags just isn’t grabbing young people. 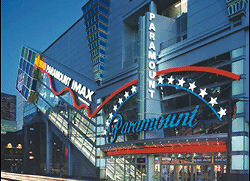 “One other interesting thing about that screening. A good many people stayed in their seats to watch the credits right to the end, including those older gents. They were obviously moved by what they’d seen and wanted more time to take it in.”
At the same time Howell’s letter came in, an e-mail from a younger guy named Peter Rogers declares that Flags “did so-so business this weekend for the same reason Hollywoodland and The Black Dahlia bombed, and why The Good German, The Good Shepherd and Catch a Fire will fall. The paradigm has shifted and no one under 30 wants to see bygone-era movies anymore on the big screen.
“Moviegoing these days is all about events and genre films (Departed, Saw 3, Spiderman, etc.). TV and cable are the primary outlet for adult dramas. The sooner you accept this, the sooner you will write about stuff people actually care about.”
Wells to Rogers: I’m not saying you’re wrong about the under-30s, but I’d rather take cyanide than live in the movie world you’re describing. No offense, gentle sir, but you’re avatar-ing the philosophy of the unwashed digital masses and forecast- ing the death of culture and cultivation, and I don’t mean the culture that worships Upstairs/Downstairs.
“I love good slovenly downmarket entertainment as much as you do; it just has to be good. An example of this is The Departed, obviously, but I also love Joseph L. Mankiewicz‘s Julius Ceasar (due 11.7 on Warner Home Video), so no offense and due respect but you have spittle on your chin and pieces of fast-food chicken on your jacket. You’re one of Hannibal’s soldiers beating drums and throwing rocks outside the gates of Rome. 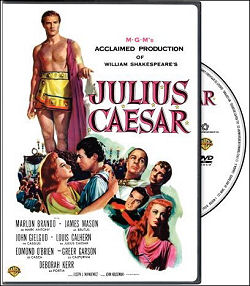 The Guardian‘s John Patterson is calling Ridley Scott‘s A Good Year (20th Century Fox, 11.10), which stars Russell Crowe as a London financial scalawag who inherits a broken-down French vineyard, “another sad case of a comedy being made by people with no sense of humor whatsoever.” 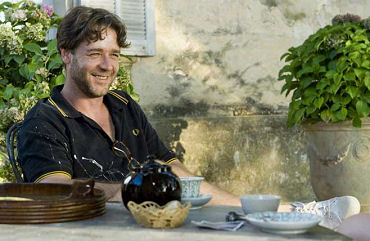 Earth to Patterson: A Good Year isn’t a comedy. Really, really. It’s one of those tonic-for-the-soul movies. A mood piece about whimsy and effervescence and nurturing those things that need nurturing. It’s light, yeah, and it has supporting “characters” and Crowe smiles and goofs around, but that doesn’t mean it’s trying to be Bringing Up Baby. It’s about slipping out the back door and being a little bit happy at times, and it left me in a pleasant, sitting-outdoors-as-the-summer-sun- sets, good-glass-of-wine frame of mind. 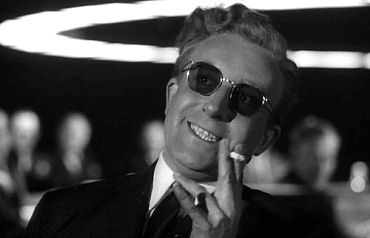 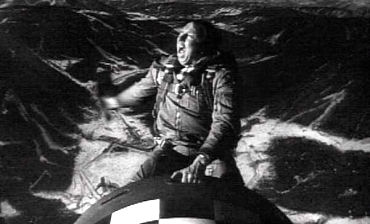 As a kind of followup to my Thursday item about City Beat critic Andy Klein pointing out the thematic parallels between Clint Eastwood‘s Flags of Our Fathers and Arthur Hiller‘s The Americanization of Emily, an HE reader named “nemo” has discovered another profound link between the two, which he pointed out yesterday afternoon:

“Upon cross-referencing IMDB and Wikipedia, I discovered that The Americanization of Emily was based on a novel by William Bradford Huie who — this is really quite interesting — wrote the screenplay for Delbert Mann‘s 1961 movie The Outsider, starring Tony Curtis as Ira Hayes. Yes, the same real-life Hayes played by Adam Beach in Flags of Our Fathers . The Outsider also focuses on the propagandistic exploitation of Hayes after Iwo Jima.
“Obviously Huie had a strong persistent interest back in the ’50s, ’60s and ’70s in taking a harsh, unromanticized look at the conduct of the American military leadership during WW II. (Huie also wrote the non-fiction book The Execution of Private Slovik, later made into a 1974 TV movie starring Martin Sheen).
“Huie was born, grew up, was educated, lived, worked, and died in Alabama. He served as a Naval officer in World War II. His journalism on racism in the South (“The Klansman” and “Three Lives for Mississippi”, about the Goodman-Chaney-Scwherner murders) earned him death threats and a cross burning on his front lawn.” 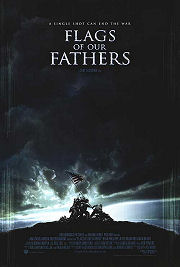 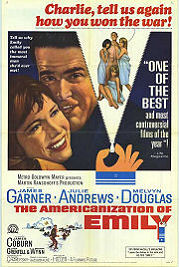 Alan Cerny wrote in response to my Running With Scissors review that he’s heard the film “has a montage set to Al Stewart‘s ‘Year Of The Cat’ — that alone is enough to make me run screaming.” Hold on, soldier. First of all, director Ryan Murphy doesn’t use the whole song but just the opening piano section. Which is the best part of the song. And listening to a this, trust me, is the most enjoyable portion of the film. I took the song and copied the piano intro a couple of times and edited out the singing — this is almost exactly what’s on the Scissors soundtrack.
“Queen Jane Approximately”

Hollywood Elsewhere is seeking an intern to work on all aspects of the site except the writing (unless you’re a genius with a prose style very close to mine) in exchange for school credit. Work from your own place but it has to be someone enrolled in a Los Angeles (or L.A.-area) university. I don’t know how it usually works when a journalism major interns with a publication but I’d prefer someone who will commit to a longer rather than a shorter term. Access/entry to press screenings, occasional press junkets, industry gatherings, etc. I’ve been hearing from friends over the past two years that I need to do this. And now I’ve finally taken their advice about six weeks after most fall terms have already begun…brilliant.

“I came to London to study a three-year course, and about a year and a half into it, I was invited to do casting for Amores Perros. I got a phone call from Alejandro Gonzalez Inarritu, the director, and he asked me to read something, videotape myself and send it back to him. I had never done casting before in my life, so I did exactly what he told me to do. After that, I got a phone call back from him saying, ‘Let’s do it.’ 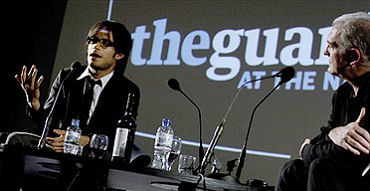 “So he sends me the script, and I said yes. Well, I was going to say yes anyway. But there was one big problem. My school [London’s Central School of Speech and Drama] didn’t allow me to work. In England, they don’t let you miss school. If you miss school for three days, you get chucked out. In Mexico, this is completely incomprehensible.
“So I told Alejandro, and he came up with a very good Latin American solution to this problem. He said that a relative was a director of a hospital and he would be able to get me a medical certificate to say that I had contracted some big tropical disease on my last visit to Mexico. That was perfect because I had no hair when I got back here from Amores Perros and people believed me completely.” — from an excellent Nation Film Theatre q & a with Babel costar Gael Garca Bernal in The Guardian, complete with an mp3 podcast of the event.