Variety‘s Michael Fleming is reporting that Steven Soderbergh and Benicio del Toro are finally, finally about to begin shooting their long-delayed Che Guevara biopic, for Chrissake. Both of them. And both, for the most part, to be shot in Spanish…hooray for that! (For a while there I thought the linguistic tradition of Richard Fleischer, Jack Palance and Che would make a comeback.) 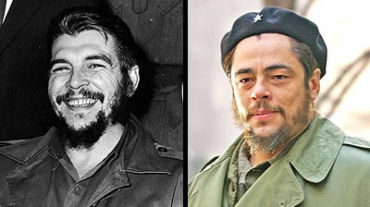 Soderbergh will shoot the two films — The Argentine and Guerrilla — in Mexico and various South American locations, including Bolivia. Del Toro will play Guevara; Javier Bardem, Franka Potente and Benjamin Bratt have been attached to this thing for eons.
Laura Bickford (Traffic) is producing. The Wild Bunch is the main financier along with Spain-based Morena Films and broadcaster Telecinco. The films will cost a grand total of less than $70 million. Talks are under way with domestic distributors. (James Schamus!) Laura Bickford (Traffic ) is producing.
Both scripts have been written by Peter Buchman, Fleming reports. Buchman and Del Toro have been working with a translator to put the dialogue into Spanish.
The Argentine will begin before the Cuban revolution with Castro, Guevara and a band of exiles reach the Cuban shore from Mexico in 1956. Within two years, they mobilized popular support and an army and toppled the U.S.-friendly regime of dic- tator Fulgencio Batista. Guerrilla begins with Guevara’s trip to New York, where he spoke at the United Nations in 1964 and was celebrated, blah, blah. Soder- bergh has already shot that opening footage with Del Toro and Julia Ormond, who plays TV journo Lisa Howard.