I saw a slightly shorter version of Bobby (Weinstein Co., 11.17) at the AFI Film Festival premiere last night. Shorter by maybe ten minutes, but it hasn’t made that much difference. This is a fairly square, somewhat old-fashioned film trying to do the right, heartfelt, semi-poignant thing with the legend of Bobby Kennedy , and either you can roll with this sort of thing or you can’t. I talked to a lot of people at the after-party who felt favorably disposed, so don’t take my view as the final word. 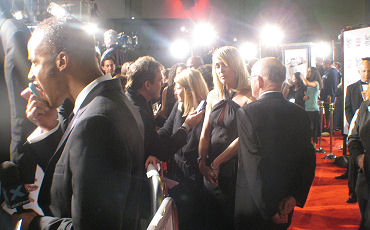 I wasn’t that underwhelmed by it. I still feel that it’s more Love Boat ’68 than Grand Hotel, which is the model that Estevez was trying to emulate when he wrote it. It’s the best-crafted film Estevez has yet made, if that’s not, you know, damning with faint praise. I didn’t hate it. It’s an okay thing for what it is.
I said it the best with this Toronto Film Festival dispatch: “If you can sit back and go with the fact that Estvez is going to try and make you feel the allure of Kennedy’s Presidential primary campaign as well as the terrible shock of his murder on the night of June 4, 1968, by making you feel how it was to be an average person muddling through in ’68, and that Estevez will try for this immersion by showing you a series of Love Boat relationship stories — and I mean stories and situations that do nothing to illuminate or inform anyone about Kennedy or his ideals…if you can kick back and say, “Okay, I can roll with this…I’m ready to accept the banality of this approach,” then Bobby isn’t half bad.
And this one: “Archival footage of Kennedy is basically what saves it, along with a recording of an eloquent and very moving speech that he gave about the persistent presence of violence in American life. Despite the best of intentions and the worst of consequences, Bobby fails to undermine the actual Kennedy mystique. There’s a lingering potency to the RFK legend — who he was, what he said, the metaphor of his life and how it ended.”
The intrigue in the above photo, by the way, isn’t Sharon Stone, whose expression suggests that the blond-haired interviewer with the battery-operated recording device has just asked her something inane and she’s debating whether or not to give him a sincere reply or goof on it. The focus is the guy on the left spraying the breath spray.
The after-party at the Hollywood Roosevelt hotel was superb in every respect. Poolside locale, scrumptious food, good people, not too crowded.