A friend was standing near Bobby costar Lindsay Lohan after she’d finished doing her on-camera interviews with E.T.‘s Jan Craft and the other Stepford Showbiz News ladies outside the Mann Chinese. What my friend overheard was somewhere between mildly amusing and “telling” — a mini-Eugene O’Neill drama played out in the space of two lines of dialogue and one bit of physical business. 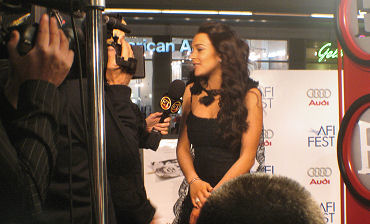 Several fans were yelling “Lindsay! Lindsay!” Lohan was aroused and moved to respond. “Oh, I have to go over and talk to my fans!” she said to Leslie Sloane Zelnick, her publicist who became (in)famous last summer for trying to explain away Lohan’s not showing up for work on Georgia Rule as a case of “heat exhustion.” But Sloane wouldn’t allow it “We don’t have any time [for that] and they’re not paying for the movie tonight,” she told Lohan.
Lohan didn’t respond except to give her publicist “a blank stare”, as if to say “What is your problem?” In response to this very slight act of defiance Sloane Zelnick “yanked her” toward the theatre, my friend says. Yanked her? If true (and I trust my source), this obviously implies a kind of strict mom-undisciplined daughter relationship between the two, which, to be fair, may be Sloane’s attempt at filling a gap left by Lohan’s mother Dina, who’s known the world over for not exactly being the responsilble-parent type. 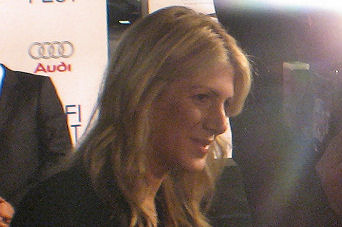