DreamWorks Animation chief Jeffrey Katzenberg has said that “everyone” will see the Spider-Man, Shrek and Pirates three-quels, “but the key will be which one gets the most multiple viewings,” writes Slate‘s Kim Masters. “His argument, not surprisingly, is that Shrek will prevail because it’s only 81 minutes long. The math, at least, is on his side: Pirates is a butt-numbing 170 minutes [and] Spider-Man is 140 minutes. 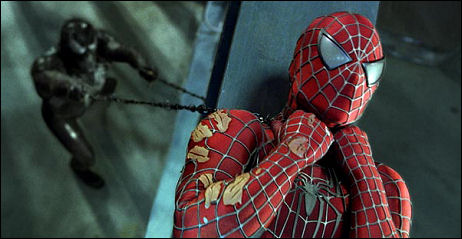 “A distribution executive at a studio that has nothing to do with any of the films just mentioned predicts that Spider-Man 3 will open huge, at about $120 million,” Masters continues. “The film is an event with a following, and there is nothing in theaters right now that anyone wants to see, according to this executive. But the question is the strength of the movie’s eight legs.

“Shrek and Pirates have broad, broad appeal,” this executive says. “With Spider-Man, the word is out that it’s dark.” Taking into account the movie’s cost, our veteran believes that could mean trouble.”

So we’ve got the numbers game set up now. Anything less than $100 million in earnings this weekend means Spider-Man 3 is a short-faller and $120 million will be regarded as somewhere between pretty good and par for the course. Is that fair, or should box-office handicappers be jumping up and down if this happens? If the columnists and critics keep pissing on it and the “dark” word-of-mouth continues unabated, we could be looking at a very signficant (45% to 50%) second-weekend drop.