Due respect to Variety‘s Anne Thompson and other industry analysts who are seeing yesterday’s Sex and the City numbers as proof that the film, as Thompson put it, is “a big-titted hit,” but SATC is so far only a one-weekend wowser. If it shows legs next weekend and the one after that, great. Well, not so great when you think about it.

Michael Patrick King‘s film is, after all, an insipid thing to sit through — one of the most spiritually appalling successful films of all time — and, as Manohla Dargis and Thelma Adams have written, a capturing (or resuscitation) of a lifestyle attitude that has come and gone.
Right now it’s a huge first-weekend female moviegoer phenomenon — a marketing success extraordinaire based on viewer loyalty for the HBO series plus more inspired marketing. It’s also, arguably, an indication that a certain portion of middle-class American females — pre-teens, teens, 20- and 30-somethings, middle-agers — are, no offense, social dimwits and aesthetically clueless saps with the collective depth of three or four quarters laid on top of each other.
The single biggest negative for the image of African Americans over the last 15 years was their widely reported elation when O.J. Simpson was found not guilty. People read those stories and saw the video clips and said to themselves, “What…?” The SATC phenomenon, I submit, is on a par with this — a cultural snapshot showing everyone in the world how utterly shallow and culturally nowhere mainstream American women have become, for the most part. If, that is, they continue to embrace this film over the next few weeks. One weekend’s worth of enthusiasm doesn’t make it a bona fide hit. 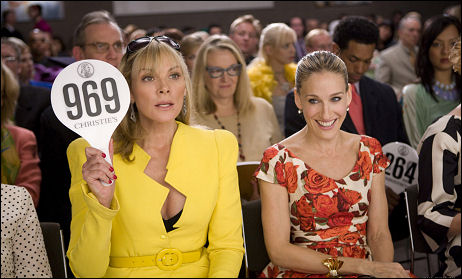 I’m obviously not speaking of women who are educated X-factor urbans, academics, journalists, hipsters, poets, creatives, etc. I mean the average American suburban woman with her fucking credit cards who sees herself as being “in the game” regardless of her age.
The Zelda Fitzgerald-Daisy Buchanan neurosis that F. Scott Fitzgerald lived and wrote about — something that was pretty much confined to the upper classes in the 1920s — has, of course, become ubiquitous today. A nation of Daisy Buchanans….good God! And what do the media mavens say about this? They say “great box-office,” “let’s make more of these,” “Michael Patrick King…the new Phil Alden Robinson!”
Thompson’s “big titted hit” line is a lift, of course, from Paddy Chayefsky‘s Network when Robert Duvall proclaims that The Howard Beale Show is “a big fat, big tittied hit!” (That’s tittied, not titted.)