51 Comments
Lucas Explains Why Not

“I don’t know what your thoughts on George Lucas are, but I talked to him yesterday and cornered him on why he hasn’t made one of those art films he’s always going on about,” writes CHUD’s Devin Faraci. ” It seems like the guy has the resources and ability to make pretty much any movie that strikes his fancy. He sort of blew off the question, but I think the way he blew it off was interesting.”
My thoughts on Lucas are basically that he’s the devil, which is to say a very real metaphor for total corruption of the spirit. He began as Luke Skywalker, and has been described by biographer Dale Pollock as a kind of a brave and beautiful warrior when he was under the gun and struggling to make it in the ’60s and into the early ’70s. But once he got fat and successful he slowly began to morph into an amiable corporate-minded Darth Vader figure. Obviously not an original observation, but I’ve been saying this since the late ’90s.

Friend-of-HE Alfred Ramirez recently compressed “The Killing Joke,” the graphic novella that The Dark Knight was mostly/largely based upon, into an rar file which can be accessed here.

In an interview with the Hollywood Reporter‘s Alex Ben Block, ThinkFilm’s David Bergstein seems to acknowledge that several lawsuits have been filed against ThinkFilm this year by partners claiming they were stiffed. “Some of what is out there is true,” Bergstein tells ABB. “The vast majority is not true. And for the stuff that is true, my answer is, ‘So what? So what if X, Y or Z might be owed money?’ 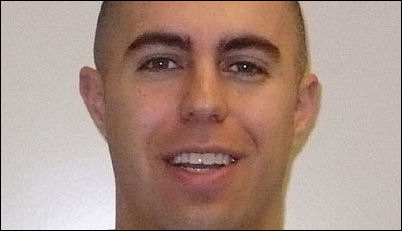 Bergstein said that? Holy moley. Ben-Block muffles it somewhat when he says that Bergstein’s attitude “has some in the creative community fuming.” But he scores a bulls-eye with the title: “Has ThinkFilm Lost Its Mind?”
“‘He’s the biggest disgrace in the film business,’ said producer Albie Hecht, formerly president of Nickelodeon, who produced the Oscar-nominated ThinkFilm documentary War/Dance and claims he still has not seen the small advance ThinkFilm promised. An arbitration is pending.
“‘This is someone who goes around making deals and looks like he has no intention of fulfilling his obligation to filmmakers and artists,’ Hecht added. ‘Not only is it disgusting, but downright immoral.'” 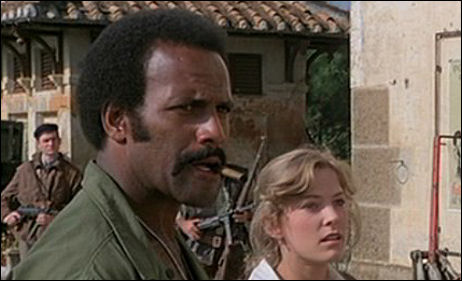 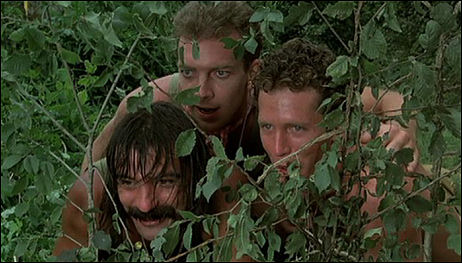 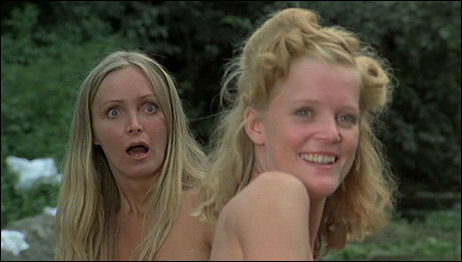 A day of thought about this new W poster and I can’t feel anything. It’s okay but the content is zilch. “Get ready”…fine. Why did Lionsgate go with a poster that says almost nothing? Because they want to build up a sense of generic interest rather than convey an idea that they’re releasing a Bush-basher? 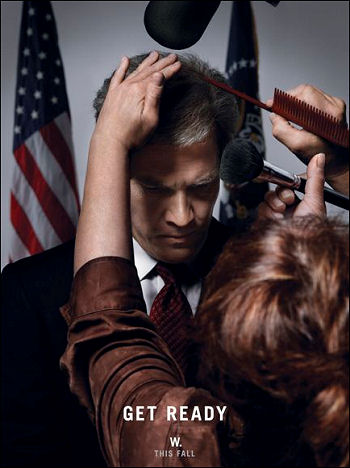 You can’t really trust trailers because of their tendency to flim-flam, but this one for Rachel Getting Married (Sony Pictures Classics, 10.3) persuaded me right away that the finished film may turn out to be Jonathan Demme‘s most entertaining and commercial entry since The Silence of the Lambs. As far as dysfunctional family comedies go, it looks very smart, engaging and high-grade.

When I said “commercial” I meant primarily the urban blue areas. Because (and I hate to even raise the subject but how do you dodge it?) I would imagine that the more dug-in bumpkins are going to be a little cool to the inter-racial marriage aspect. (“They” will be be going to Beverly Hills Chihuahua on 10.3) If you’ve ever been to enemy territory…wow, that just came out. My point is that we’re really living in a different country than the one for which Guess Who’s Coming to Dinner? was made 40 years ago. A dark guy marrying a fair-skinned lady was an “issue” back then, and in Demme’s film it’s nothing. It’s a “yeah…so?” I love that.
Jenny Lumet‘s script is a family-wedding dramedy that primarily focuses on Anne Hathaway‘s seriously screwed-up Kym, but it’s mainly a dysfunctional- family comedy about the issues of various folks gathering to celebrate a forthcoming wedding between Rachel (Rosemary DeWitt) and Sidney (New York musician Tunde Adebimpe), a sort-of Nigerian-looking guy who’s very trim and attractive with a beautiful smile. But we know how some of the reds are going to take this. Well…don’t we?
I’m also struck by the fact that Debra Winger, who was born in 1955, is suddenly looking and playing 50ish in her role as Abby, the mother of Kym and Rachel. I don’t know if it’s makeup or what but she’s got what looks like gray-streaked hair. You could almost use the word “matronly” to describe her. It’s been 25 years since Terms of Endearment and 26 years since An Officer and a Gentleman…Jesus. The clock just won’t stop.

Defamer reported some kind of Century City bomb threat a little while ago. Evacuations of the MGM tower commenced about a half-hour ago, the report says. The only responsible thing is to evacuate, obviously, despite the usual suspicions that bomb threats are usually bogus. Only losers with small appendages announce an intention to cause harm. Truly malevolent people don’t warn. Serious evil either happens or it doesn’t.

“As a director I love all the visual and technical stuff and it’s really fun to do but the hard lesson that you learn when you screen the movie is when it’s a comedy, people want to laugh. They don’t care about the explosions up or how much money you spent…if they’re not laughing, the movie’s not working. Everything has to play into the tone of the comedy.” — Tropic Thunder director-star-cowriter Ben Stiller during last weekend’s press junket. 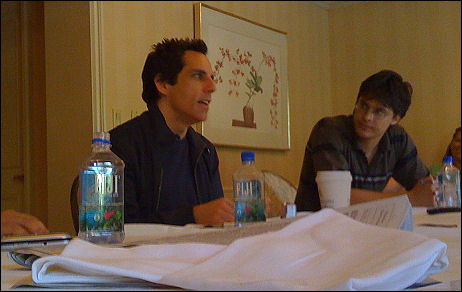 And yet the fact that Stiller made Tropic Thunder feel believable and well-jiggered in a first-class way let me relax on a certain level. If the action choreography, special effects and cinematic values hadn’t been delivered on such a high level, I might not have been in a receptive laugh-y mood. I can’t laugh at movies that feel in the least bit sloppy or imprecise or roughly slapped together. Comedy is a brutally difficult thing to get right.

I’ve cut out the opening distributor-logo intro and confined this mp3 to music from a prologue portion-plus-main title of a certain action-adventure film. If you haven’t gotten it by the 30-second mark, you need to pack it in. This is the easiest music clip I’ve posted since I started this game last week. 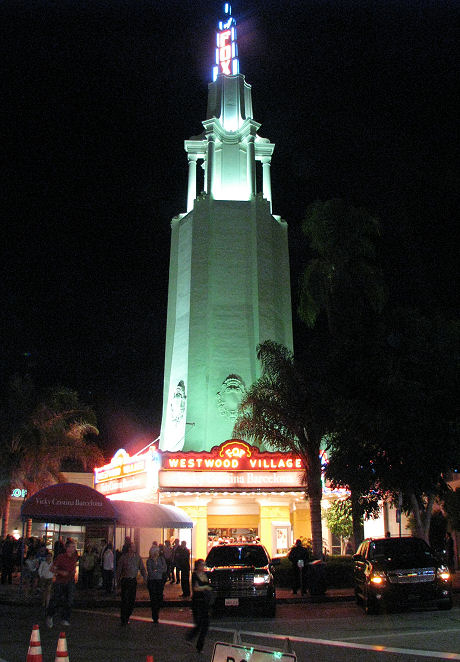 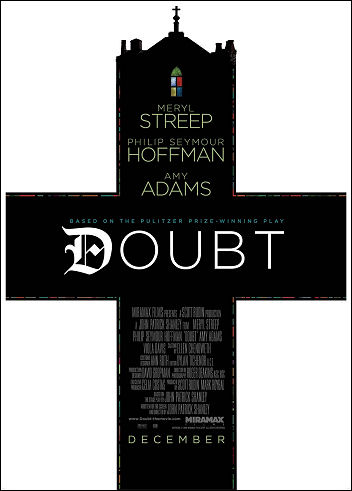 One reason for the box-office death of Swing Vote last weekend was that under-35s constituted only 35% of the audience, according to Variety. I’d be willing to bet that the percentage of under-25s who went to Swing Vote was more like 15% or lower. The political content of the Costner film was made clear by trailers and TV ads, so it can be assumed this element dampened enthusiasm.
Which leads again to concerns about how politically-averse the middle American under-25s will be this November? Some of us suspect the election is going to be a squeaker with Obama winning by two or three points, maybe less. The margin of victory will of course depend on the turnout by African Americans, Hispanics, the liberal 18 to 24s, college-educated professionals, previously-Clinton-supporting women, etc. It’s all about turnout, turnout, turnout.
I just wish there was a reason to feel better about the under-25 commitment levels, despite the ’04 data that everyone’s seen. What is the actual percentage of voting-eligible younger citizens who are expected to vote three months from now? 30-something per cent? You can’t trust these guys.