This is the single best scene in Robert Altman‘s California Split. The funniest, I mean. The most intoxicating, the most mirthful. I’ve watched it many, many times and have never failed to laugh, or at least break out in a big grin. Which makes it more than just just “funny.” The only unfortunate aspect is this crummy looking cropped video, which I copied from chicago.zenzulu.com. If anyone has a decent embed code of this scene (i.e., preserving the original 2.35 to 1 aspect ratio), please send along.

Last Friday night at ComicCon MTV.com announced the top ten Greatest Movie Badasses of All Time, and the biggest coolest badass of all was….Clint Eastwood. As MTV.com’s Josh Horowitz observes, “It’s probably safe to say it’s the only panel featuring both James Toback and Method Man.”

Included are acceptance speeches from Eastwood and Sigourney Weaver.

All due respect for Clint’s “do ya feel lucky, punk?” speech in Dirty Harry, but his sidewalk scene opposite those two big Afro boys in Gran Torino is badder, I think.

Forget the Best Actor win odds of the moment, which probably still favor Sean Penn winning for Milk. Mickey Rourke‘s BAFTA win the other night awoke me to the late-blooming realization that his winning the Oscar for his Wrestler performance will deliver an emotional payoff like no other, and that’s what matters to most of us.

I’m guessing that others are thinking the same thing right now, and that this may prod those who haven’t yet voted (the ballot deadline being a little more than a week away) into voting for the guy. Despite all the political missteps he’s made since the campaign began last fall. Or possibly because of them, in a way. Because everyone is relating right now to hard times for obvious reasons, and Rourke, symbolically, is an emblem — the emblem — of error and faux pas and past political misjudgment, and people are sensing that what we all need in our lives is a little charity, a little kindness, a little bit of a helping hand to those who need it, even if they made their own bed and should’ve known better at the time.

Voting for Rourke allows people to feel extra-generous because he hasn’t quite played the game in the carefully orchestrated way that Russell Crowe, another bad boy, did when he campaigned for his work in Gladiator. And compassion and generosity in the face of economic terror, I sense, has become a stronger current out there than the safely liberal human-rights/remember the scourge of Prop 8/salute-a-noble-martyr message that voting for Gus Van Sant‘s Milk would be, Penn’s excellent performance notwithstanding.

Yes, Academy voters (most of whom have allegedly already voted) may have decided that Rourke has already benefitted tremendously from his Wrestler restoration and that’s enough. Maybe. But something tells me he might take it all the same. Because no other win would provide a stronger emotional meltdown on Oscar night.

To Max Evry‘s list of the best misanthropic comedies of the modern era [see below], I would add Rainer Werner Fassbinder‘s Despair (’78), which you can’t get, by the way, on DVD. Despair isn’t particularly “funny,” but it’s amusingly and relentlessly pessimistic about everyone and everything. My favorite moment is when Dirk Bogarde looks right at the camera and gestures as if to say, “See? Do you see how predictable and utterly banal the people closest to me are?”

“In honor of the excellent (and lovably nasty) trailer for April’s Seth Rogen vehicle Observe and Report, I thought I’d make a list of the most misanthropic movie comedies of the modern era. When I say ‘misanthropic I don’t mean like As Good As It Gets where the main character is hateful in his distrust of mankind but is ultimately redeemed by pills and the love of a pretty Helen Hunt. I’m talking about the DARKEST, CYNICAL-TO-THE-BONE films that do not wimp out when it comes to portraying humanity at its most despicably irredeemable.

“Not surprisingly, many of these filmmakers have made similarly-themed dark comedies that wouldn’t qualify for one reason or another, and they get runner-up status!

“God bless Danny DeVito for making what is probably the darkest major studio comedy of all time. If you thought Revolutionary Road was cynical about marriage…

“Billy Bob’s title character is the lowest of the low, the scum of the earth, a foul-mouthed fornicating thieving mall santa… and he may also be the most redeemable character in the film. Terry Zwigoff has built a career on making movies that are abrasive, harsh, and funny, but the fact that this one was a bonafide box-office smash is still jaw-dropping.

“I personally find the characters in this movie too deeply unlikeable to get much enjoyment, but that’s also part of the fun of Robert Zemeckis’ last real throwback to his early dark comedies. Used Cars is an infinitely better movie, but the characters are too darn sweet despite their sleazy antics to fit this criteria.

“I’ll never forget the first time I saw this, how in simultaneous shock and awe I was at Todd Solondz’s fearlessness in making comedy out of some of the most deeply flawed people ever committed to film. Dylan Baker’s character is truly sick, but somehow never becomes the full-on monster we all wish he was. He remains, tragically, human.”

“You could easily argue that the Coen’s movie is more of a Kafka-esque nightmare than a comedy, but this take on the moral wasteland that is Hollywood features a title character of relentless egotism and repugnance, surrounded by a literal circus of idiots.”

“According to Woody Allen, if you’re not famous you’re nobody and if you can get away with murder and not be bothered by it, it’s all good!”

“It feels like Altman was sharpening his knives for a long time before he dug them right into the heart of Hollywood with this film.”

“This film is just as potent and ballsy as it was 45 years ago. Almost all of humanity is destroyed to the tune of big band music… how much more gleefully misanthropic can you get?

Was Armed and Dangerous a mall-cop movie? No, but it was close enough. Can we go so far as to call mall-cop movies a comedic genre ? And does the curious success of Paul Blart, Mall Cop mean that audiences will feel just a little mall-copped out when Observe and Report opens wide in April? However you slice it, this Seth Rogen-Anna Faris comedy looks triple-quadruple coarse.

Rogen doesn’t have to be Green Hornet thin (a physical state that he’s probably trashing with a high-caloric vengeance now that that Hornet has gone south) but I do have a slight problem with the guy when he’s too fat, as he clearly is in this red-band trailer. And I know mall cops are supposed to look dorky, but I don’t care for that Curly-in-the-Three Stooges tennis-ball haircut either. That Pineapple Express/Knocked Up look is what works.

“It’s often hard for actors to accept their own strengths. There’s a tendency toward self-destructive behavior in very talented people. Look at Marlon Brando, Orson Welles or Montgomery Clift. They were brilliant and self-destructive. It’s a mystery why that is. But it is also true for Mickey. Some actors lose their way and they never put it together again. But by playing a guy in The Wrestler who is no longer what he was, Mickey has been reborn.” — Diner director Barry Levinson writing about Mickey Rourke in today’s N.Y. Times. 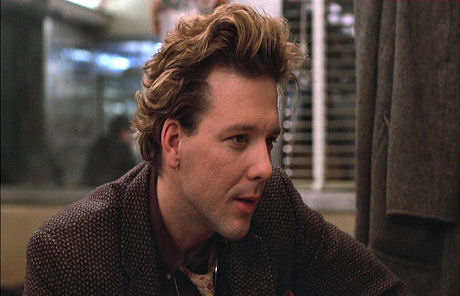 I don’t trust IMDB commenters, but if I wasn’t suspicious of them I’d be very enthused about seeing John Hillcoat‘s The Road (Weinstein Co.), which, as we all know, was bumped out of an ’08 release last fall and hasn’t yet been given an ’09 release date. The talk from unreliable people who claim they’ve seen a recent cut is more than encouraging. 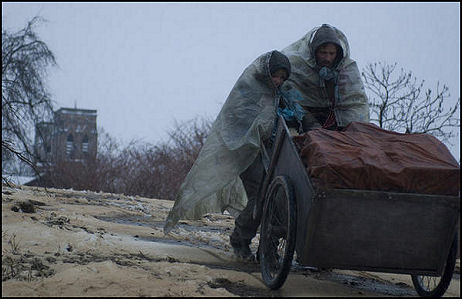 Harvey Weinstein will do what with it, I wonder? My guess is that he’ll push the opening all the way into the fall for an Oscar run. (Which is what the original plan ostensibly was.) But if it’s as good as the IMDB phantoms say it is, wouldn’t it make sense to show it in Cannes three months from now?

I’m in Holly Springs, Mississippi. I have to haul it back to Memphis airport for my 1:30 pm flight to La Guardia. That’s all she wrote until this evening. I need to say one thing about the people I’ve met in Tennessee and Mississippi. They’re kind, gentle, polite, alpha. It’s been a pleasure to know them and feel their vibe. That includes my very gracious hosts at the Oxford Film Festival. 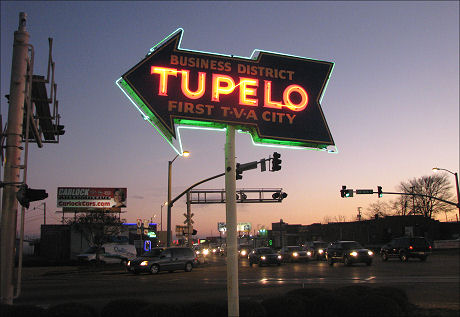 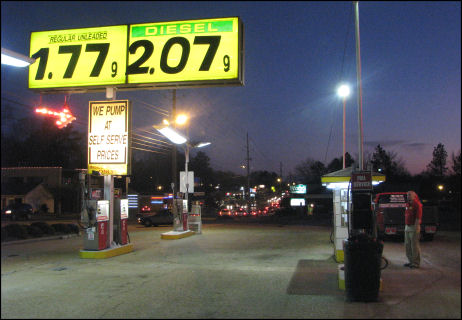 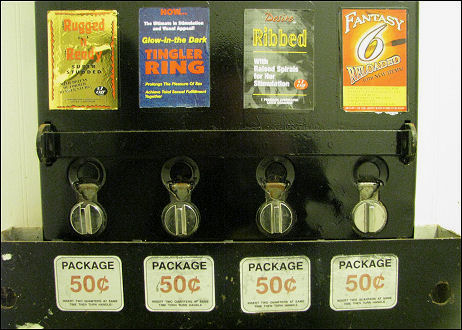 Yesterday morning Cinematical‘s Elisabeth Rappe wrote an appropriate mockery piece about Mary, Mother of Christ, an actual movie-to-be that will open on 4.2.10, according to a 2.5 story by Variety‘s Michael Fleming and Tatiana Siegel.

Camilla Belle as Mary. Jonathan Rhys-Meyers in the dual roles of Gabriel and Lucifer. Peter O’Toole as Symeon. (Who’s that?) And Al Pacino and Jessica Lange “currently in talks” to play King Herod and Anna the Prophetess. The director is Alejandro Agresti (The Lake House, Valentin).

It’s best not to presume anything, of course, but there’s just no controlling the involuntary recoil reaction to a project like this. The thought of a bearded Pacino in royal robes…good God. What an embarassment for he and Lange both. The top gigs aren’t coming their way so they’re more or less forced, if they want to keep flush, to take gigs of this calibre. As Rappe notes, Pacino as King Herod is “in the territory” of John Wayne as a Roman centurion in George Stevens‘ The Greatest Story Ever Told.

“It’s rare to hear journalists and critics vocally turn against a film at the Berlin International Film Festival,” Indiewire‘s Eugene Hernandez wrote a little while ago. “Catcalls and hisses, while more common in Cannes, are actually rather rare on the international festival circuit. So, it came as a bit of a surprise to hear a loud ‘boo,’ then whistles, followed by tepid applause and another ‘boo’ this afternoon at the end of Lukas Moodysson‘s Mammoth.”

Fascinating lead graph, but there’s no payoff. All Hernandez says is that the ending is what offended. Okay, but that’s it? Was it a failure to satisfyingly conclude, or an ending that contained a plot turn that people found deeply offensive? Did costars Gael Garcia Bernal and Michelle Willams drop trou and moon the camera? Surely there must b a way to convey what ticked people off without divulging the particulars.

“After the showing, the debate began and filmmaker Moodysson admitted that he’s been surprised by audience reactions to his new movie.”

Hernandez describes Mammoth as “an ambitious English-language story shot on three continents. Bernal and Williams portray an upwardy mobile New York City couple with a young daughter who is cared for by a Filipina maid. Desperate to return to the Phillipines, the noble nanny cooks, cleans and raises the American girl in order to make enough money to some day return to her own kids back home.”