I did a little reading about Palermo over the last few weeks, knowing I’d be visiting there during my post-Cannes travels. And having yesterday spent a few hours traipsing around Palermo’s mean streets, I can now state with authority that certain travel writers and travel websites have lied through their teeth about the essentially ugly and rancid nature of this city. 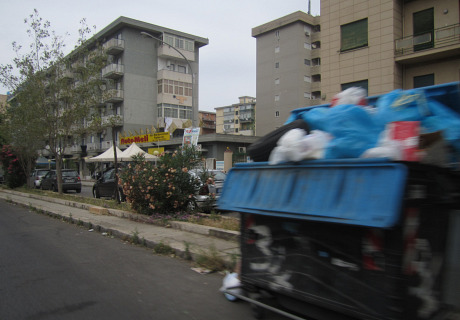 Palermo is a Mafia rathole — a corrupt, crime-infested, economically challenged, overly-congested sprawl of mostly unattractive apartment and commercial buildings (mostly of a skanky gray, grayish-brown or dogshit-orange color) with a few historical buildings and commercial diversions to keep the tourists happy. Air-polluted, generally unkempt, vaguely smelly, over-populated, too many buses and scooters, overflowing garbage cans — a festival of clutter and crap. Certainly not what anyone would call “clean” or “well-maintained.”

The various mafia corruptions are probably the main reason why Palermo feels like a “favela” out of Fernando Meirelles‘ City of God. Napoli, Italy’s other urban armpit, is also crime-infested, and it looks, feels and smells the same way. The influence of the Cosa Nostra is not good for tourism because the guys who’ve profited from what’s happened in these cities are clearly opposed to civic enhancement when it interferes with stuffing their own pockets. Which means, obviously, that civic enhancement pops through only occasionally, if that. 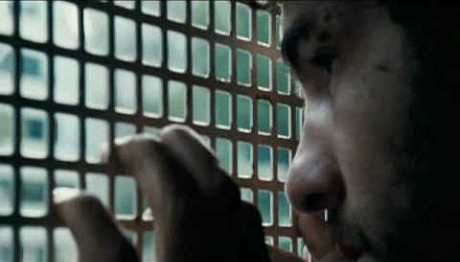 “The so-called ‘sack of Palermo’ is one of the major visible faces of this problem. The term is used today to indicate the heavy building speculations that filled the city with poor buildings. The reduced importance of agriculture in the Sicilian economy had led to a massive migration to the cities, especially Palermo, which swelled in size.

There’s a soulless, stone-glass-and-steel, black-and-white corporate hotel sitting next to our hotel (the Villa Gaia) here in Cefula. I suspect that you need to be a kind of soulless, stone-glass-and-steel corporate asshole (or the wife or girlfriend of one) to want to stay in one of these chilly Dante-esque abodes. Every attractive European town has one, and the people walking in and out are always Masters-of-the-Universe types driving shiny black cars and wearing slick dark suits.

In an era of diminishing natural resources and encroaching corporate cancer, old-world elegance (i.e., aged wooden floors, organic plaster or brick exteriors, organic clay-tile roofs, Oriental throw rugs, grandfather clocks, 19th Century paintings) is the only way to go for anyone with a smidgen of taste. Try telling that to the Hugo Boss hotshots who swear by those corporate hell palaces. They don’t get it, and they probably never will. Or at least not until they’ve kicked around for a couple of decades and learned a few things.

The general theory is that people who prefer splendorous hard-stone dwellings are looking to make a statement (to themselves or to others) about where they want to be or how they’d like to project themselves, as opposed to who they really are or where they’ve come from (genetically, culturally, economically). They’re looking to dwell in a nouveau-riche atmosphere of faux-Roman splendor, and figuring that if they don’t buy into this Blaupunkt life-of-Nero lifestyle their competitors (or women they’d like to attract) will suspect they’re wood-floor losers at heart, and will write them off. Or something like that.

In short, the more your lodgings reflect this ancient-Rome-meets-Gordon-Gekko style, the more socially insecure and desperate-for-approval you’re likely to be. Just saying.