Late To The Party

I finally saw Toy Story 3 last night — 10:40 pm show, 3D, small plex on Second Ave. and 12th Street. And I get it all. The people doing cartwheels over this thing are responding to the usual quality Pixar stuff — a deft application of charm, wit, soul and panache. The key ingredients are cleverness plus heart, relatable emotionalism, polished story-telling skills and a script (primarily written by Little Miss Sunshine‘s Michael Arndt) that fits together like a fine Swiss watch.

Plus…what else? Thematic resonance, dazzling digital painting, top-of-the-line craft in all departments and the usual double-track appeal to adults-plus-kids.

It’s an exceptional, grade-A entertainment — a family ride that tickles and massages and sinks in and never slacks off. It’s the most emotionally touching film of the year thus far, and one of the most smartly constructed. It’s going to make gazillions, and it’ll probably win the Best Animated Feature Oscar next February.

But very few have identified another obvious characteristic, which is that while Toy Story 3 is nutritious, it’s also a heaping plate of comfort food. As much as it invests in the idea that we all need to be loved and needed, and that loyalty to family and old friends is essential to a fully-felt life, it never stops shovelling corporate-created brands and associations that we all knew and felt relaxed with as kids (or as young parents). This is what makes the film feel “good” and “reassuring” — I get that. We know and relate to the world it’s recreating and is playing with so cleverly. But I began to feel as if the story was taking place in some emotionally-finessed corporate gulag.

Armond White has taken a lot of heat for being one of two or three critics to pan Toy Story 3, and I know he can be a reflexive sorehead and a contrarian, but he’s not entirely incorrect in saying that the film “is so besotted with brand names and product-placement that it stops being about the innocent pleasures of imagination — the usefulness of toys — and strictly celebrates consumerism.”

That said, I loved Big Baby’s macabre vibe (a little bit of Attack of the 50-Foot Woman) with that one half-closed eye, and Mr. Potato Head’s trying to make do with a soft tortilla instead of a plastic potato for a body — this was the one bit (a kind of Salvador Dali nod) that I laughed out loud at. Ned Beatty‘s voicing of Lotso, the emotionally resentful camp commandant, was perhaps the best of the lot. And a malfunction turning Buzz Lightyear into a passionate Latin lover — that was a funny (if thematically meaningless) bit. 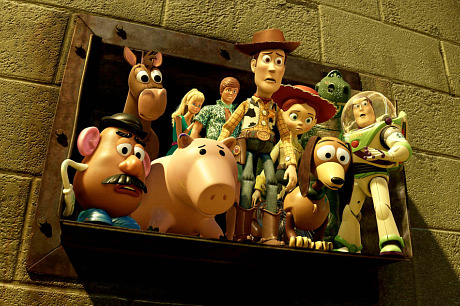 I got the trash-furnace holocaust allusion, of course, but…whatever. It didn’t fit into the theme or the milieu so I was like “okay, I see that, yeah” but that’s all.

I have to say that I didn’t quite believe the transformation of 17 year-old Andy (voiced by John Morris) from his first-act identity — a kid who’s into the excitement of college and adventure and hormones and (presumably) girls and who’s mindful of what his toys used to mean to him (especially Woody) but isn’t all that concerned with their fate apart from an instinct to stash them in the attic — and his third-act identity as a tender and loving toy-parent who wants to be extra-sure that the little girl he’s giving them to will be extra caring and considerate.

It’s very gratifying to see Andy be that guy at the end, but I didn’t buy it. At best, some 17 year-old boys might be into saving one or two of their favorite toys but — let’s face it — most toys get the heave-ho (and I don’t mean into a daycare donation box) and most high-school or college-age kids don’t look back. Life is cruel in that respect, which again is why everyone is embracing Toy Story 3 — it’s selling a dream about love and caring and loyalty that we’d like to see embedded in our own day-to-day.

I believe in hanging onto toys myself. My kids’ toys, I mean. I still have a Boris Karloff Frankenstein model and a Lon Chaney Wolfman model also — both purchased at a Universal toy store in ’97 or ’98. I also have a large black Alien queen left over from the early ’90s. I wish that Dylan’s best friend, a monkey named Babiki, was still around. I know that Jett still has a hand-made Joey Ramone doll that I bought him about ten years ago.