Kind Of A Drag

I think it’s fair to say that the people running the TCM Classic Film Festival are a little too restrictive and traffic-coppy and dare-I-say obstructionist in their dealings with the press. Okay, with me. They’re running a very well-organized, very popular film festival here (all the screenings I’ve been to have been 80% or 90% sold) but today’s experience in trying to get into a q & a with Warren Beatty and Alec Baldwin at the Chinese sixplex following a screening of Reds was needlessly problematic. 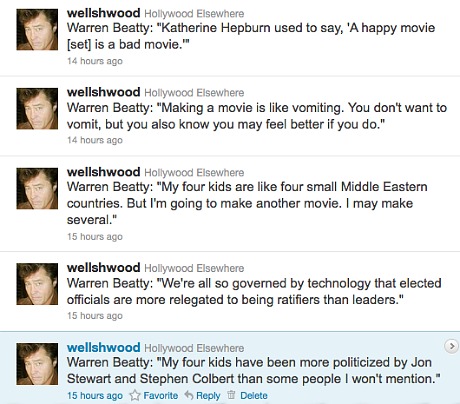 I just wanted to cover the q & a but I dropped by the screening about 45 minutes before the film was due to end to get a seat and be ready. But I was told I couldn’t go in because they weren’t letting people in midway — I needed to be seated at the very beginning of the show — and they also couldn’t allow me to witness the q & a, again because I hadn’t been seated at the start.

“But I’m press and I just want to cover the q & a,” I said. “Isn’t the point of issuing press passes so press can cover? I’ve seen Reds six or seven times. Can’t you just let me slip in unobtrusively and take a seat?” No, the street-punk usher and then a female publicist said, because it’s a closed screening and there’s no room. “Have you looked to see if there are seats?,” I said. “I’ll give you $100 right now if there aren’t a few seats open…there are always a few empty seats.”

Two publicists later I was finally allowed to slip inside, but up to that point their resistance had been very dug-in and officious. And they were adamant about no photography or recording. I said “okay, sure, no problem, fine”…but I was thinking, “Why? Why restrict the press from covering in a relatively thorough way? Why don’t they just say no flashbulb photography? If they want to be this private about it why even hand out press credentials? What’s their hang-up?”

They really had a broomstick up their butts about this and that. It was like dealing with security people at some private corporate gathering in some Rocky Mountain retreat.

And then I got in there and Beatty and Baldwin took the stage, and there were suited and T-shirted goons hovering everywhere, giving everyone “looks” lest they might be tempted to pull out an iPhone camera and snap away. And then I was told to turn the sound down as I tweeted because the “sending” sound was bothersome. Sure, no problem….dicks. Then when it ended the crowd was kept inside the theatre like cattle in a stockyard pen so that Beatty and Baldwin could stroll out unbothered by pesky film fans and their grubby mitts and iPhone cameras and whatnot.

Overall the Classic Film Festival staffers feel too corporate and controlling. They’re nice and professional but they’re not “cool.” Their basic attitude is, “If we don’t control things really carefully and say no about this and that, the natural unruliness of human nature will overrun our festival and turn it into chaos.” I now have a bad taste in my mouth, and if anyone asks me privately about this festival henceforth I’m going to make a face and start bitching a bit and rolling my eyes. 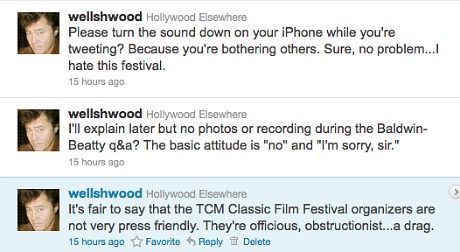