I hadn’t read good things about Katie Asleton‘s Black Rock, a kind of chick mumblecore Deliverance thriller, so I didn’t expect much when I finally sat down to see it yesterday at the Egyptian. But I was still appalled at how lame it is. Asleton and husband Mark Duplass, who wrote the script and exec produced, need to stay the hell away from the action-thriller genre henceforth, or at least up their game. Because Black Rock — surprisingly, stunningly — verges on the incompetent. 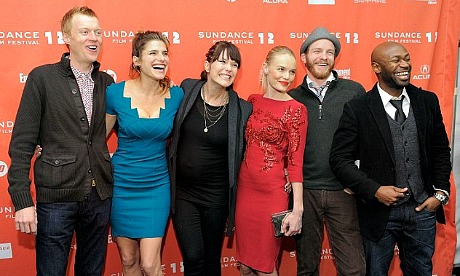 The film has three basic problems. One, the event that triggers violence between three camping girlfriends (Aselton, Kate Bosworth, Lake Bell) and three dishonorably discharged soldiers (Jay Paulson, Will Bouvier, Anslem Richardson ) isn’t believable. Two, the women frequently act like morons before and after the violence occurs. And three, even as they’re in danger of being shot or knifed or beaten to death they still place a high premium on settling their emotional conflicts and can’t shut the fuck up as they’re crawling around in the mud and the brush.

Preparation suggestion for all feminist female directors thinking about making a thriller of this sort: Watch Ted Kotcheff‘s First Blood three or four times. It might teach you that when your life is in danger in the boonies you need to (a) Rambo up, (b) be quiet like an animal and (c) save the emotional sharing for when you get back to safety.

Asleton, Bosworth and Bell are camping on a remote island off the coast of Maine when they run into the three above-described assholes. The remote location and lack of any legal recourse if things turn weird would naturally lead any sane woman to play it very, very carefully if confronted by three guys with rifles. But not Katie! She not only decides to flirt with the best looking of the three (i.e., Bouvier) but entice him into the woods for sex. And then the booze suddenly catches up with her and she does a 180 and says “whoops, sorry…changed my mind.” Brilliant! Bouvier decides to force himself upon her and Asleton resists and squirms and freaks and finally stops him by thunking him in the head with a large rock. His spirit leaves his body and rises into the night sky above.

The break from reality happens when Paulson, the most rabid and unstable of the three, decides to waste the three women as revenge for Asleton killing their buddy. Duplass and Asleton are trying to sell the idea that this guy is so whacked and such a woman-hater that he’s ready to become a murderer and a lifelong fugitive from justice in order to affirm the bonds of buddyhood. I could maybe accept these two creeps deciding to sexually assault the three women for revenge, but not kill them. That’s too much. The women explain that it wasn’t deliberate and that Asleton was just trying to defend herself, and that doesn’t matter to Paulson. His willingness to jump into the pit of death and madness happens way too easily, and it’s especially bothersome that he and Richardson act like they don’t know much about soldiering (i.e., shooting, tracking, hand-to-hand combat) when things turn nasty.

The last 15 or so minutes are especially awful. There’s a skill and an art to delivering good do-or-die combat sequences. And there had to be a way for these three women to handle themselves in such a way that wouldn’t invite disbelief and derision. People sitting in front of me at the Egyptian were smirking and chortling. I kept silent but was truly amazed.