“The best sequence in Marley, Kevin Macdonald‘s sprawling, 2 1/2 hour chronicle of Bob Marley’s legacy, arrives at the very end,” says Indiewire‘s Eric Kohn. “While the credits roll, Macdonald shows Marley fans around the world singing his greatest hits. The diverse cultures and appearances, united by Marley’s lyrics and good vibes, speak to the singer’s global effect — as well as its lasting appeal today.

“It’s enough to make the fairly conventional overview of his career preceding the finale look comparatively tame. Despite its breadth, Marley delivers little more than a well-crafted overview sure to please diehard fans while leaving others unmoved.

“However, Macdonald’s approach gives a definitive feel to Marley, from its earliest moments tracking the singer from his impoverished Jamaican roots through the apex of his stardom and final days of a losing battle with cancer. Macdonald’s massive list of talking heads includes close relatives, childhood friends, former bandmates and producers, each of whom contributes to the movie’s fluid structure. It’s easy to get swept up in the Marley fever when virtually every subject has something overly kind and even worshipful to say about Marley’s legacy.

“However, this also creates a certain padding around the titular figure, not unlike the issue plaguing Martin Scorsese‘s equally detailed George Harrison: Living in the Material World last year: The ‘authorized’ stature challenges the movie’s authority over the topic. Rather than deconstruct the legend, Macdonald accepts it unquestioned, if only because the interviewees control the tenor of the narrative. Instead of peeking behind the curtain, Macdonald marvels at its surface.”

I have a 2 pm screening of Terence Davies‘ The Deep Blue Sea, a film about an illicit affair and not about a killer shark, and then there’s this evening’s Westwood premiere of Wanderlust followed by an after-party. I’m not drinking or eating much these days so I’m not sure how I feel about socializing.

Possibly more serious contenders are Olivier Assayas‘s Something in the Air, Sergei Loznitsa‘s In The Fog, Michel Gondry‘s The We and the I, Ulrich Seidl‘s Paradise trilogy, Hong Sang-soo‘s Another Country, Im Sang-soo‘s The Taste of Money and Xavier Dolan‘s Laurence Anyways.

It’s no secret that millions of Americans care a lot more about their relationships with pets than with other humans, and that any public person known to have been heartless with a pet is going to incur their disdain. Mitt Romney‘s Seamus-on-the-roof story is really going to hurt him in the general election — seriously. Dog cruelty is only slightly less deplorable than child abuse in the eyes of tens of millions. Here’s the Dogs Against Romney site and its corresponding Facebook page.

From my 1.4.12 piece about the Seamus incident: “Anyone who would put a dog inside a carrier strapped to the roof of a car moving 70 mph for hours and hours is one cold fuck of a human being. I would never do that to a dog, even to some stray I’d just found on the side of a road. Seamus is a social-political metaphor, all right.”

Disney’s $250 million John Carter, a sci-fi fanboy adventure pic that opens in three weeks (Friday, 3.9), is in some kind of trouble, and maybe worse than that. A couple of hours ago Deadline‘s Nikki Finke reported that it’s all but dead due to soft tracking. (“Dead” in relation to the huge cost and prospective return, I mean.) There’s even concern, voiced by a rival studio exec, that “this could be the biggest write-off of all time.”

Maybe it’s as bad as all that or maybe not, but the situation obviously isn’t good .

“Our world is dying,” a female voice says on the Carter trailer. “You may be the only one who can save us.” I hear awful dialogue like that and I look at the blatantly CG-ish effects, and I just turn away. Pathetic.

The marketing exec who would be tickled pink if Carter goes down says that tracking is “2 unaided, 53 aware, 27 definitely interested and 3 first choice.” I’m not a tracking expert, okay, but I know enough about it to know that these numbers are not what anyone would call encouraging. A second studio guy tells Finke that the tracking report “just came out [and] women of all ages have flat out rejected the film.”

Captain! Water pouring into the engine room! Tell the crew to put on lifejackets and prepare to evacuate! Brrnnng! Brrnng!

Slashfilm’s Peter Sciretta tweeted last night that “the first big press screening of John Carter happened tonight but no one is allowed to tweet their reactions.” Does that mean it blows or…? If John Carter is taking on water and possibly in danger of foundering, wouldn’t Disney publicists at least want some spirited geek buzz flying around to help raise the stock?

“Disney is nervous, really nervous, but trying to hold out some hope,” Finke writes. “‘We know that we have a long way to go,’ a Disney insider confides. ‘It’s still four weeks out, and the bulk of the media hasn’t hit yet. Our Super Bowl ad did what we intended it to do: have a pop of awareness. On Sunday we launch a full campaign with 90% of all of our media ready to go.”

Eighteen months ago Deadline reported that Meryl Streep and Julia Roberts would team on a Weinstein Co. film adaptation of August: Osage County under director John Wells, with expectations of filming in the summer of 2011. But a long delay ensued (largely due to playwright Tracy Letts taking forever to adapt his play into screenplay form) and Streep and Roberts were thought by some to have flown the coop.

But a month ago Deadline‘s Pete Hammond reported the actreses were definitely back on the project and that filming would begin in September for a late 2013 release. Today Streep and Roberts’ involvement was officially announced by the Weinstein Co. (along with intentions to shoot in the fall), and many treated this like big news.

A hippy-dippy woman open to making love as a spiritual gesture or exercise can quickly lose interest when the recipient of her largesse starts talking crudely about slamming ham, etc. Watching this kind of prolonged miscommunication isn’t the least bit funny. There’s never been a 30something married guy (which Paul Rudd is playing) who’s ever been this clueless. Not on this planet. Which is why the scene just lies there.

Because the idea isn’t to be “funny” but to make a point that stodgy married guys are too thick or slow-witted to betray their wives even when the “other woman” has openly invited their attentions. This is roughly the same idea used by Hall Pass, that glumly unfunny Owen Wilson-Jason Sudekis film. Married guys don’t have a clue when it comes to cheating so don’t worry, girls! Strictly a sop.

I should have posted this yesterday but all I had was the cat, and I was too lazy to find my own b & w Marty mugshot to complement it. The trick now is to find animals (wild or domestic) that other major nominees resemble. Seriously — I’ll post the best of them.

This from HE reader Martin Blank: 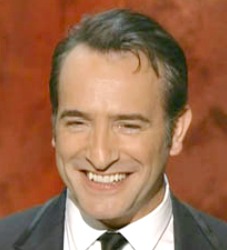 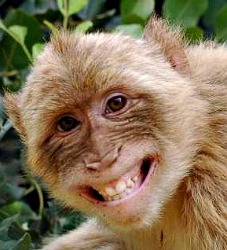 The only thing that can lift my Oscar spirits is something that can’t possibly happen — a suprise Demian Bichir win for Best Actor. That is the only thing that could possibly turn me on (other that Billy Crystal‘s patter) during the 2.26 telecast. This is going to be one of the dullest and least surprising Oscar shows in history. 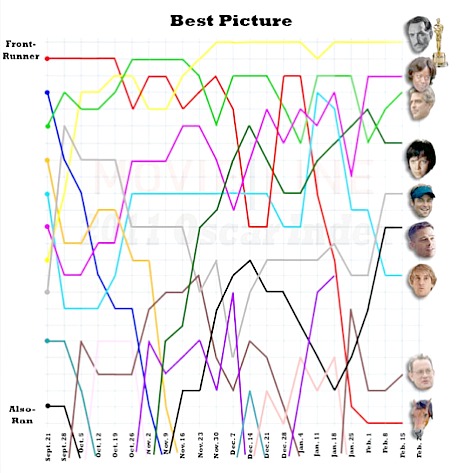 It seem as if the Viola Davis-and-Octavia Spencer coronation has already happened, for the most part. I’d feel differently if Brad Pitt or George Clooney had a real shot at Best Actor, or if Moneyball‘s Bennett Miller had been nominated for Best Director (110% deserved) or if Mychael Danna‘s Moneyball score had been nominated. But I’ve got nothing to invest in here.

A couple of more years like this and the Oscars will be in real trouble.

Somebody sent this along yesterday without including the link. I didn’t give that much of a shit about 22 Bonds so I didn’t pursue…eff it. But the sound of 22 MGM lions roaring at the same instant is one of the coolest things I’ve ever heard. Especially with earphones. For that alone this is worth a post. The best opening credits to a Bond film? A tie between Dr. No and The Spy Who Loved Me.

Lowen Liu of Slate‘s “The Hive” has suggested that each year the Academy should have a chance to re-vote the Oscar nominees from ten years back. Which is a really good idea because then the membership would be making calls based entirely on distance and hindsight (which tend to clarify things) and without the fog of politicking and emotional mood swings.

So let’s drop back a decade and hold a re-vote of the 2001 contenders:

Best Picture: In The Bedroom. Runners-up: A Beautiful Mind (actual winner, partly because of Russell Crowe’ sperformabnce but mainly, I beieve, because of James Horner’s music and the pen scene at the end), Gosford Park, The Lord of the Rings: The Fellowship of the Ring, Moulin Rouge.

I’ll give you a true-life “bullshit night in Boston” story. I was driving cab for Checker, which had a big garage next to Fenway Park. It was one of the best jobs I’ve ever had because I learned something new every day. In any event my driver’s side window was stuck in the open position one night but it was warm out and not raining so I didn’t mind.

So I was making my way south from Tremont in heavy traffic when two stone psychopaths — guys with ugly complexions and madness in their eyes who looked like Hells Angels rejects — hailed me. I wouldn’t have stopped but traffic was temporarily stalled and I couldn’t move, and so the two psychos started walking straight for me. Trouble. Possible theft if they got in. Couldn’t happen.

Just then the traffic broke and I started to slowly pull away, and as I drove past them I said, “I can’t take you, man…I’m on my way to a pickup.” Which of course was a lie. One of the psychos said “fuck you, asshole!” and kicked the rear of the cab as I started pulling away. I got angry and made the huge mistake of flipping them the bird as I drove off. A bad idea because traffic stalled again and I was stuck there with my window open. The two psychos ran up and started slugging and spitting. One of them kicked my driver-door rearview mirror, knocking it off. I howled back and tried to block their attacks with my left arm, but they landed a couple of good ones and raised a bump or two. The saliva was the worst part. The traffic broke again and I hit the gas and was finally free.

A half-hour later I got a radio call request for my cab (#50) to pick up a fare at a certain address, which I naturally ignored. They called again, complaining that I hadn’t showed up. I had to explain to the dispatcher what was going on, etc.