Even though I couldn’t make myself sit through Cloud Atlas when I caught a Toronto showing, I respected that it was a huge passion project for co-directors Lana and Andy Wachowski and Tom Tykwer, and that it took a lot to shoot and piece together. I can be cruel at times, but it seems a little too cruel of Time‘s Mary Pols to call it 2012’s worst film. Worse, even, that John Carter — that’s saying something.

“This is a phenomenal piece of action filmmaking, and an even better piece of nonaction filmmaking,” New York‘s David Edlestein has written about Zero Dark Thirty. “It also borders on the politically and morally reprehensible.” And yet he’s calling ZDT his #1 film of the year. Or maybe that’s why. 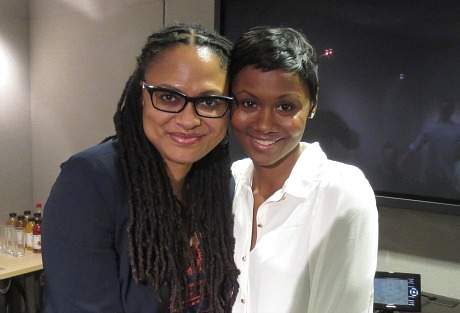 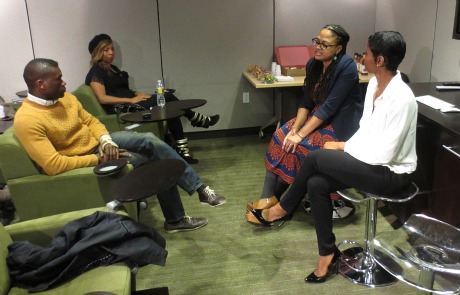 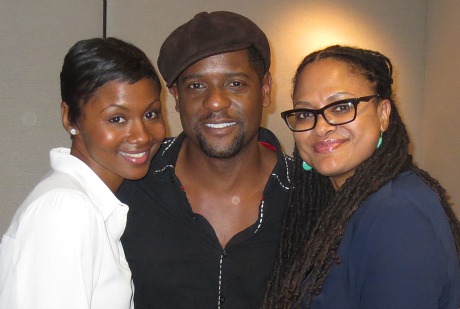 13 Comments
Play It As It Lays

A combination of the title (why a “glimpse”? who cares about Roman numeral III?), the cowboy hat, the arrow in the chest, the banana and pickle posters and the ’70s hair has me worried, or at least has given me pause. Every time I say the title it comes out as A Glimpse Inside the Mind of Charles Schwab, Investment Broker. Directed and written by Roman Coppola, opening in mid February and distributed by A24 and Film Buff.

This isn’t just another Silver Linings hammer post. The intriguing part begins at the 3:00 mark, and it’s basically David O. Russell and Bradley Cooper explaining that Robert DeNiro‘s choking-up confession scene with Cooper in the attic bedroom just happened. But after the first take DeNiro delivered the emotion five more times for the sake of coverage.

This is a couple of days old, but I just think it’s worth noting how exceptional it is — historically, culturally — to hear a U.S. President riff knowledgably and comfortably on the legacy of Led Zeppelin.

Somewhat brazenly, I decided to prune this latest Oscar Poker chat (# 103) down to 16 minutes and 47 seconds. This is because MSN critic Glenn Kenny (in his third visit) is highly articulate and perceptive in discussing Zero Dark Thirty, and because everything else we discussed doesn’t stand up to this portion. A good one.

TheWrap‘s Brent Lang is reporting that Rise of the Guardians “is projected to lose $50 million for DreamWorks Animation, according to an executive with knowledge of the movie’s projections. Produced for a reported $145 million and featuring the voices of Hugh Jackman and Chris Pine, Guardians has underachieved at the box office despite getting strong reviews. Since opening over the Thanksgiving holiday, the film has grossed $48.8 million domestically and another $57 million foreign, according to Box Office Mojo.”

The Hobbit‘s review embargo went up an hour ago, and right off the bat I’m reading all kinds of descriptions of how 48 frames-per-second photography doesn’t cut it. It’s too new, too specific, too crackling — a “fiasco,” according to a Movieline headline for a Jen Yamato story. TheWrap‘s Steve Pond called the process “a little disturbing and uncomfortable,” and Variety‘s Peter Debruge said that with 48 fps “everything takes on an overblown, artificial quality in which the phoniness of the sets and costumes becomes obvious.” 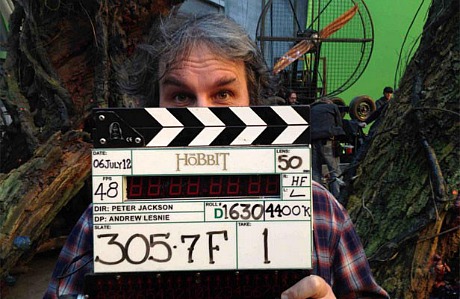 And MSN’s James Rocchi tweeted that we can “blame Tolkien for the dull plotting, but blame Peter Jackson for the ruinous 48fps.” Rim shot!

Let me explain something. The 48 fps feeling of discomfort or unfamiliarity, if you insist on that being your primary response, goes away after 20 minutes or a half hour or thereabouts. You get used to it and then it’s nothing. It doesn’t get in the way, it doesn’t call attention to itself — it’s just there. And it’s fine.

Let me explain something else. 48 fps is a lot closer to what life looks like with your eyes. It’s much clearer and sharper and more vivid than 24 fps, which looks like that special neverland called “cinema” — a very peculiar world with very specific climates and textures, and all of it fake. No matter what Pond, Debruge, Yamato and Rocchi are telling you, there’s nothing wrong, trust me, with a movie looking more vivid and life-like and less like the other-worldly realm of 24 fps, which the harumphs prefer because — it really comes down to this — they’ve been watching it all their lives.

All the harumphs really know is that 48 fps ain’t 24 fps, and so they’re saying “eff this noise!” But if you can just roll with the new way and stop having a hissy fit about it not looking like 24 fps, it’s pretty cool. And it’s really ideal for big, empty, drawn-out and wildly bloated movies like The Hobbit because at least it looks so much more gleaming and molecular than 24 fps, like it’s happening on the other side of an absolutely spotless glass window. 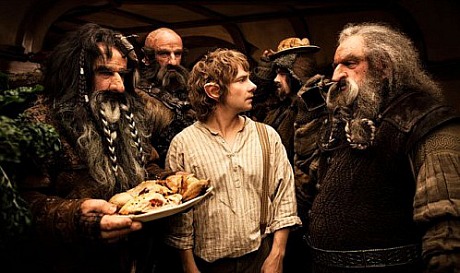 My personal preference is that straight adult fare should be shot at 30 fps because it looks a lot cleaner than 24 fps and reduces pan blur and makes the action seem smoother. And all the rest of the films (i.e., those described above) should be shot at 48 fps. And believe me, the harumphs will eventually ease up and settle in.

As for The Hobbit itself, it’s a major slog. I began looking at my watch at the 25-minute mark, at which point I moaned and muttered to myself, “God…over two hours to go!” It’s like being on a long dull plane ride to Alaska without wifi. It’s ponderous, meditative and glacially paced, and sporadically or episodically cranked up in the usual Jackson style. The acting is always broad (except for Martin Freeman‘s low-key Bilbo Baggins), but everything is always frenzied and amplified and compounded with the heroes facing terrible, insurmountable odds, and the action scenes always ending in a cliffhanger with the “oh my God!” rescue never happening until the very last second, and with nobody “good” ever getting seriously hurt, much less killed. They might be unconscious and look dead, but they’ll wake up sooner or later.

I knew it would be like this, and it was. Tolkien’s “The Hobbit” was a relatively slim volume but Jackson has turned it into a big lumbering trilogy. I really can’t bear the idea of watching two more three-hour-long Hobbit flicks…and I don’t think I will.

1. “An early favorite for Best Director, The Master‘s Paul Thomas Anderson was overwhelmed by Zero Dark Thirty‘s Kathryn Bigelow on the second ballot, with Argo‘s Ben Affleck finishing a distant third. (Strikingly, Steven Spielberg, who failed to get a single first ballot vote, was never in contention.) By this time, it was evident that Zero Dark Thirty would run the table and, indeed, The Master finished third for Best Picture behind Argo, although it took three ballots for the obviously exhausted voters to decide the winner.”

3. “The closest and most surprising race saw Rachel Weisz (The Deep Blue Sea) edged Jennifer Lawrence (The Hunger Games, Silver Lining Playbook) and Emmanuelle Riva (Amour). Last year’s winner Jessica Chastain (Zero Dark Thirty) was a factor throughout, tying for the lead on several ballots. (This race was by far the most polarized; only three of the 16 ballots cast for Lawrence or Chastain cited both actresses.)”

Dustin Hoffman‘s Quartet (12.28) is running at 89% on Rotten Tomatoes. I’ve been invited to but have missed two or three screenings. And I have the screener on my shelf and I haven’t popped it in. This procrastination ends tonight. I’m sorry for being a dilletante. 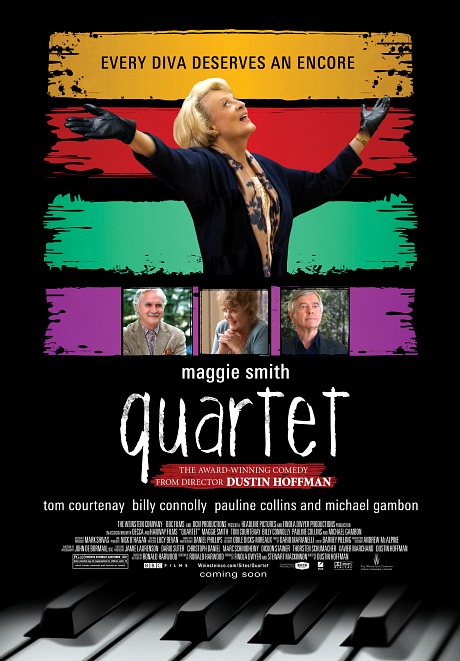 “I agree with you that Life of Pi did a beautiful job with 3-D, but after the first 10 minutes, I actually was no longer interested in the 3-D. It didn’t make a bit of difference to me whether it was in 2-D or 3-D. After the first few minutes, I was just annoyed to have glasses on and the decreased luminosity of the screen.” — Francis Coppola speaking to MTV.com’s Josh Horowitz in 12.3 interview.