Six hours and 15 minutes ago I drove over to the Directors Guild building for a 6 pm screening of Kathryn Bigelow and Mark Boal‘s Zero Dark Thirty, which I loved. Hard as nails, a tension opera, the real details, lean and mean, cinema verite, the confidence to “get there” in its own way, and when it does it pays off like a slot machine. I believed every line, every scene, every frame. 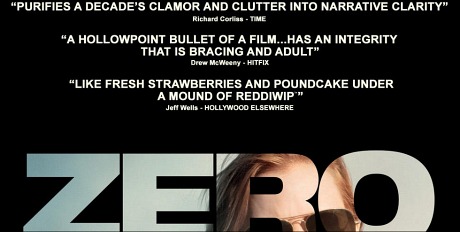 No one is a bigger admirer of The Hurt Locker than myself (I was one of the first fans out of the gate,) but Zero Dark Thirty delivers on a more precise, exacting and muscular level — it’s dry and fierce and austere and Day of the Jackal-ish (minus the sex) and much more exacting and verite than even I expected. And yet it builds and delivers like a great melodrama, or a great melodrama according to Biggy-Boal’s new rules.

And then I saw Django Unchained…a total spur-of the-moment thing. There was a big crowd inside the DGA lobby waiting to get into a 9 pm screening, and a filmmaker friend suggested that I join them so I did (what the hell) and nobody stopped me at the door…wham!

I don’t want to break the rules by riffing or reviewing, but it’s a complete Tarantino wankathon, a ’70s spaghetti western “southern”, about as un-period as it could possibly be, pop tunes on the soundtrack (including Richie Havens‘ “Freedom”), 2 hours and 45 minutes long (and a really talky second hour that has to be experienced to be believed), sadistic and blunt, semi-“thoughtful”, comedic and smirking and about as cinematically sincere as an SNL skit, pockmarked with occasional fast-zoom shots, incredibly impressed with itself, howlingly funny at times, silly, stupid, undisciplined, simultaneously Mandingo-esque and an anti-Mandingo, tedious, a hoot, astonishing at times and too effing long. But at least it’s not three hours, which it allegedly was a while back.

A lot of people are going to love Django Unchained. But forget any awards action. Okay, maybe Leonardo DiCaprio or Christoph Waltz for supporting, but I doubt it.

I don’t have time to do a full-on review of Zero Dark Thirty but it’s a great film for delivering a real drama (i.e., one disguised a a procedural) on its own terms and without going “Hollywood” except for one line that includes the word “motherfucker”, and I swear to God the guy who said it’s basically a long episode of 24 has a major blockage going on.

To me Zero Dark Thirty felt like dessert — like fresh strawberries and poundcake under a mound of Reddiwip.

Jessica Chastain gives one of the great hard-boiled performances of all time, and yet you can read her thoughts and feelings every inch of the way, clear as a bell. I still think the Best Actress Oscar belongs to Jennifer Lawrence, but I worshipped Chastain’s steely minimalism to such a degree that I’m really glad I rsvp’ed to see it a second time late tomorrow afternoon. Now I can go there again. 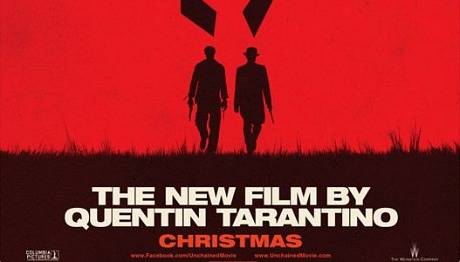 Don’t even talk about ZDT not being a Best Picture contender, and I don’t want to hear Tom O’Neil giggling about it in the elevator going down to the garage. Best Director for Bigelow, Best Original Screenplay for Boal. And Chastain is a Best Actress nominee, of course. And I really loved Jason Clarke as a CIA torture guy.

It’s 12:44 am now and I have to crash before long, but here I am sitting here beaming with pride that I’m not one of those Academy flabby-bellies who’ve been kvetching about how Zero Dark Thirty is too cold or unemotional. This kind of “cold” and “unemotional” turns on my spigots like almost nothing else. Thank you, God, for giving me the genes and the luck and life experience that didn’t make me into one of them. Thank you for letting me see through to the nub and heart of things, and the ability to recognize the cinematic equivalents of the freshest, best prepared foods and the chemistry of Hostess Cupcakes.

It may not warm the cockles of your heart, but for me Zero Dark Thirty is Bigelow’s masterpiece. And big cheers in particular for Boal’s screenplay, which nails right through and hones it all down, scene after scene after scene.

Incidentally: A friend said he saw Alfonso Cuaron‘s Gravity on 11.12 and that it’s really good. Roughly 90 minutes long, tightly fused, unfolds in real time (or something fairly close to that), a good story about a way out of a horrific situation, has fantastic 3D and a knockout opening — something like 20 minutes without a cut.

A guy who’s always talking to Academy members says they’re mentioning Amour a lot. On its own, no prompting. I’m mentioning this in the wake of Michael Haneke‘s film having won four European film awards today — Best European film, best director, actor and actress. And I’ve seen it three times now (once in Cannes, once at a screening, once on a screener). So I’m reading the signs and feeling the juju and I don’t know what else.

Just an attaboy to the Participant Media designer or subcontractor who threw this invite together. Nice. I’m doing a post-screening q & a with Ava Duvernay, I’m told. The Help director Tate Taylor is co-sponsoring or co-inviting or whatever. MON star Emayatzy Corinealdi will also attend. 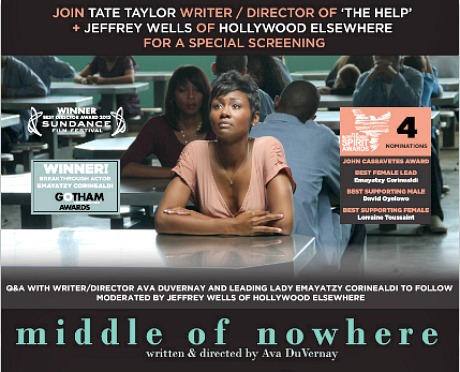 I’m not shocked by the crib death of Andrew Dominik and Brad Pitt‘s Killing Them Softly this weekend. It did a lousy $2.4 million Friday and is expected to earn no more than $7.5 million by Sunday night. It’s playing in 2424 situations for a possible average of $3,094 per screen. The Thanksgiving-to-mid-December period is always slow, but what’s up with the F CinemaScore rating? The film has issues, okay, but I figured it would rate a B or a B minus. F isn’t rational. F is crazy. F is people beating up ushers as they leave the theatre.

Is it the hammering of the political metaphor that turned people off so much? Is it the glum, greasy downish vibe with the darkish lighting and everyone smoking cigarettes all the time? Is it because Ben Mendehlson‘s character sweats like a pig in Manila? Is it because everyone in the film drives gas guzzlers and muscle cars? Is it because James Gandolfini shows up, checks into a hotel, does nothing and goes home?

I realize that today’s mass audience is too stupid or not hip enough incapable of appreciating the grubby poetic flavor of the Boston-area crime realm of George V. Higgins, and I realize that if Pitt and Dominik had re-shot The Friends of Eddie Coyle frame-for-frame a la Gus Van Sant‘s Psycho it would die just as quickly as Killing Me Softly has, but why the F? That’s nuts.

I need to hear from Joe Bomowski about this. He knows what the dumbasses want and why they don’t like this or that.

After sleeping four and 1/2 hours on the Tokyo-to-LAX flight and then landing yesterday morning at 10:15 am and being up all day (which included the Richard Gere luncheon and a 6pm screening of The Hobbit), I crashed this morning around 2 am, which is 5 pm Hanoi time and 7 pm Tokyo time, and then woke up at 11:40 am or 2:40 am Hanoi time and 4:40 am Tokyo time. I don’t who I am or who anybody else is. Seriously, the thing to do is now is last through the day and try to crash no later than midnight.