Cecil B. DeMille was a pious hypocrite. The theme of his Biblical-era films was spiritual salvation through the Bible, but no other studio-era filmmaker shovelled sex, female flesh, big muscles, debauchery and blood with more relish. On top of which he was a Republican who believed in the blacklisting practices of the late ’40s and early ’50s. But he had a fairly decent eye for balance and composition — almost as good as John Ford‘s. He knew how to fill the frame, and his films were handsomely dressed and designed. Samson and Delilah (’49) is swill, of course. The dialogue by Jesse L. Lasky, Jr. and Fredric M. Frank is agony. But George Barnes’ Technicolor cinematography is ripe and richly toned. The Bluray streets in early March. 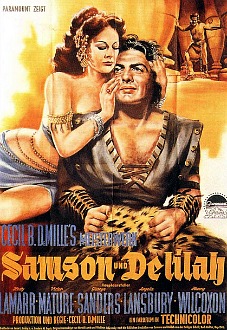 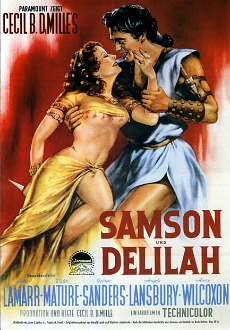 New York snowfalls never last. The weather is constantly shifting and mooding out. A snowfall always turns to slush within a day or less. It’s 27 degrees now but the melting will begin tomorrow when the temperature hits 35, and then Sunday’s rain will wash it all away. 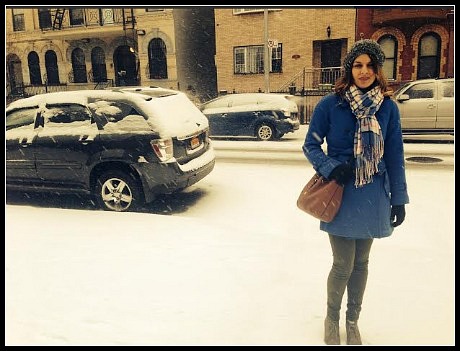 The Dissolve is running a “psychedelic” poster inspired by Spring Breakers. It was designed by Sam Smith. My first thought was “this conveys nothing of what the film actually is or feels like…nothing about it from the rosey greenish tones to the suggestion of familial bonding and the sublime, settled-down feeling that a sunset shares…Harmony Korine‘s film has so little of these elements that it’s barely worth commenting upon. Oh, I get it…Smith was tripping when he created it?” 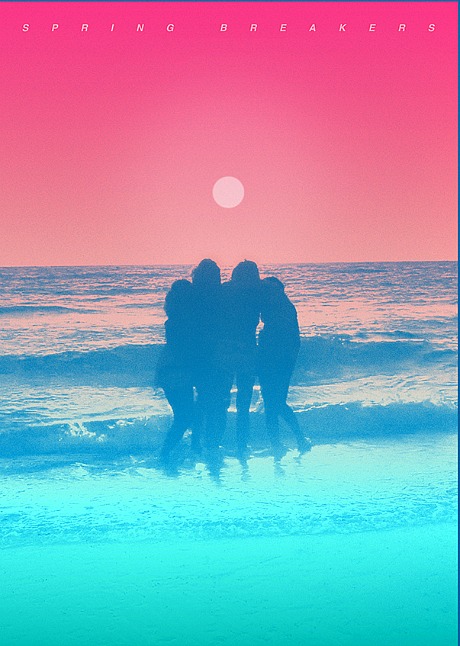 Two nights ago I watched the Criterion Bluray of Robert Altman‘s Nashville (’75). And guess what? It doesn’t hold up. It’s earnestly dislikable. I wanted to shut it off after the first half-hour.

It’s a typical Altmanesque grab-bag of this and that, but it’s mainly a social criticism piece about Middle-American politics, patriotism, pettiness and celebrity. The specific focus is the banal eccentricities and pretensions of the country-music industry, but for the most part the film is snide and misanthropic. Sorry, but I’m removing it from my Altman pantheon. I loved it in ’75 but I’m pretty sure I’ll never watch Nashville again. It’s failed the test of time.

In basic construction terms Nashville is about a troupe of eccentric, improvising actor-hipsters leaning on their default Left Coast impressions of Nashville’s sophisticated-hick culture and dispensing variations on a single dismissive theme: “These people are small and petty and lame and delusional.”

The late Gwen Welles plays a short-order waitress and a completely untalented would-be singer. I’ve known a few mediocre performers in my life (actors, singers…I was one myself when I tried to be a drummer) and the common characteristic is that they’re somewhat talented but not talented enough. But Welles’ bad singing is a patronizing “bit” — an actress pretending to be God-awful. In actuality a singer with a voice this tone-deaf wouldn’t dream of trying to become a performer. But try she does.

Welles’ big scene arrives when she tries singing at a club and fails so miserably that the crowd hurls cruel taunts and insults. Welles is so deflated by the response that she goes numb. Her eyes space out and she starts disrobing because some drunken asshole has yelled “show us yer tits!” or something in that vein. She ends up naked and humiliated, but I, sitting in my living room 38 years later, was appalled. I felt sick. I haven’t watched a scene this ugly in a long, long time.

David O. Russell‘s American Hustle opened in six theatres yesterday to the tune of $211,000, and now’s the time for the HE community to weigh in. It’s one of the year’s best but…where do I start? I’m from New Jersey and the Jersey-based characters in American Hustle aren’t from my gene pool. I felt for Jeremy Renner‘s Elvis-pompadoured mayor of Camden but even he’s not right for me — too ethnic, too many kids, too much food at the table. Yeah, I got a kick out of Jennifer Lawrence‘s spunky, braying housewife but I avoid women like her when I see them in real life. They’re nice deep down but they’re horrible to deal with on practical matters.

Hustle is improvisationally alive and crackling and knowingly tacky, but for all the enjoyment it gave me and all the award-season action it’s getting, it doesn’t quite…what? Deliver my kind of emotional through-line? I didn’t quite see myself in this thing, not really. I’m one of the few New Jersey guys who writes a daily movie column that movie stars read so don’t tell me. But it’s a good film. Better than good. It’s nervy and anxious and always up to something. It might be better than I realize.

My first thought as I clicked on this teaser for Christopher Nolan‘s Interstellar? I’m a bit tired of Matthew McConaughey starring or costarring in everything. (The first stirrings of this began with that Martin Scorsese Dolce & Gabbana ad that he costarred in with Scarlett Johansson.) My second reaction was that his accent bothers me — “To break bayhhrriers, to reach for the stahhhrrs.” My third & final thought: What the eff is McConaughey saying at the very end? I’ve listened five times on earphones and this is what I’m hearing: “Our greatest accomplishments cannot be behind us…’cause ahh guessee…ayhs bahss.”