Can The Wrong Actor Ruin Your Movie?

Whenever filmgoers are presented with a romantic couple consisting of a famous actress and a less-well-known boyfriend, they immediately become protective of the actress by assessing and deciding if the boyfriend is (a) a good guy and worth staying with or (b) an egoistic, untrustworthy, not-hot-enough dick who needs to be jettisoned at the first opportunity. 60 seconds after being introduced to Adam Levine in John Carney‘s Begin Again (formerly Can A Song Save Your Life?), in which he plays Keira Knightley‘s famous musician boyfriend, I knew he was toast. I just knew. Not good-looking enough, for one thing. I also hated Levine’s dress sense and his fake serenity and slightly detectable air of entitlement. (He’s the lead vocalist for Maroon 5 and a rich entrepeneur who’s marketed his own fragrance and menswear collection.) I also felt a tiny bit alienated from Knightley for being with Levine in the first place. How come I could see through this asshole right away and she couldn’t? I began to feel repelled by images of Knightley (or anyone for that matter) having sex with Levine. I honestly wanted to see him get hit by a bus or die in a plane crash, or at the very least get beaten up in a fight. Levine is rat poison. 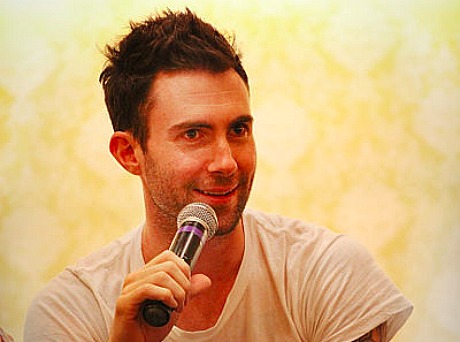 Will you look at those beady little pig eyes and stubbly face and oddly shaped nose? I’m sorry but Adam Levine’s performance in Begin Again ignited extraordinary negativity and repulsion.

This is the main problem with Carney’s film, otherwise an agreeably dreamy, up-spirited Manhattan street musical that I saw in Toronto last September. It’s nowhere near as good or authentic feeling as Carney’s Once but it’s not half bad, and some of the music is genuinely on-target and enlivening.

March 28, 2014by Jeffrey Wells23 Comments
« Previous post
The Singer, Not The Song
Next post »
“Old Testament on Acid”