Hateful Eight star Kurt Russell and I were having a nice enough interview earlier today, talking not just about Quentin Tarantino‘s soon-to-open film and Russell’s flinty, craggy-voiced performance as a tough-talking bounty hunter named John Ruth, but also, briefly, about a possible film version of Chapman and MacLain Way‘s The Battered Bastards of Baseball.

Released in 2014, Battered Bastards was and is a wonderful doc about a scrappy-ass, mid ’70s minor-league Portland baseball team (called the Mavericks) that was owned and managed by Kurt’s dad, character actor Bing Russell. Russell said that Todd Field might direct with Russell possibly playing his dad…or not. Too early to say but here’s hoping. 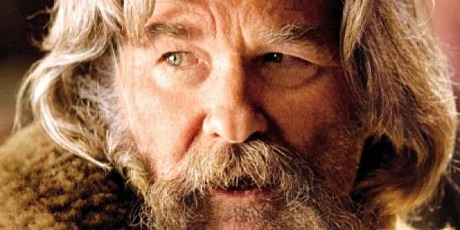 Then I segued into a riff about how movies tend to reflect the times and the culture they come from. I was thinking that the Quentin Tarantino brand, which has always included a swaggering, half-smirking, bordering-on-flippant use of violence at times, might not fit or reflect the post-Paris, post-San Bernardino culture now as well as it did the all-is-well Clinton ’90s.

I was thinking in particular of a 12.3 N.Y. Times survey piece I read this morning. Written by N.R. Kleinfeld and called “Fear in the Air, Americans Look Over Their Shoulders,” it basically observed that “a creeping fear of being caught in a mass rampage has unmistakably settled itself firmly in the American consciousness.” And I was wondering how that wink-wink grindhouse blood and brutality that colors the second half (and more precisely the final third) of Tarantino’s film is going to synch with that…or not.

Here’s a reasonably close transcript of our gun-and-culture discussion. I guess it wasn’t so much a discussion as a kind of argument, except it was more about Russell arguing with me than vice versa. I played it cool and made my points in a mild-mannered way. Listen and judge for yourself:

Wells: The Quentin cult, if you will, is, like, 23 years old, starting with Reservoir Dogs…right? Violence as attitude, violence as style, violence as fashion…not dealt with in an earnest, realistic way. The swagger thing.

Wells: And I was looking in the N.Y. Times this morning and this guy interviewed several people in the country in the Midwest and West. And with almost everybody out there, he reported, there’s a feeling of anxiety in the culture…when’s the next one?

Russell: So how do you connect the dots?

My 9.13.15 review of Tom Hooper’s The Danish Girl, reposted in the wake of pic’s 11.27 release: “The notion that Eddie Redmayne might win a second Best Actor Oscar for his performance as Einer Wegener/Lili Elbe in Tom Hooper‘s The Danish Girl (Focus Features, 11.27) died last night in Toronto.

“Okay, it didn’t die but it certainly downshifted. And the cause of that downshift was the film itself, a reasonably decent effort which screened for press & industry yesterday morning and the public last night. It seemed to play well enough, but it didn’t seem to lift anyone off the ground either. And Redmayne seems caught in a kindly web of calculation. As submissive and devotional and brave as his performance is — you have to give him credit and respect for really letting Lili into his soul — the effort is gently muffled by Lucinda Coxon‘s script (based on David Evershoff‘s same-titled book) and Hooper’s direction, which feels overly poised and burnished and finally confining.

“The Danish Girl is a finely rendered, exquisitely sensitive, middle-of-the-road Oscar-bait film that will win respect and applause among the 50-plus Hollywood guild & Academy set. But it’s almost bloodless — well acted, handsomely captured and intriguing to some extent, lulling and softly emotional but never fascinating and absolutely dead fucking terrified of doing or saying anything that might be construed as brash or nervy or irreverent or out of synch with today’s p.c. drumbeat.

“A creeping fear of being caught in a mass rampage has unmistakably settled itself firmly in the American consciousness. People are able to recite with precision how often they think about a mass shooting touching them. Every day. Twice a week. Up to four times a day. Every other day. Every two weeks. Every time they’re in a crowded space. Whenever her teenagers are out. Every time she walks into her office and back to the parking garage. Every day. Every day. Every day.  ‘And they are worrying that the randomness of it, which on one hand makes the odds of something happening to them very small, that randomness also makes it possible to happen to them,’ says Alan Hilfer, the former chief psychologist at Maimonides Medical Center in Brooklyn.” — from a 12.3 N.Y. Times survey piece by N.R. Kleinfeld, called “Fear in the Air, Americans Look Over Their Shoulders.”

Key passages from Barbara Ehrenreich’s 12.1 Nation piece about the declining quality of life among rural white working-class guys, who are feeling fucked and diminished from all sides and are therefore clinging to guns as they slide more and more downhill as they die at a higher rate than in decades past…hence Donald Trump:

Excerpt #1: “In relation to people of color, whites have long had the advantage of higher earnings, better access to health care, safer neighborhoods, and of course freedom from the daily insults and harms inflicted on the darker-skinned. There has also been a major racial gap in longevity — 5.3 years between white and black men and 3.8 years between white and black women — though, hardly noticed, it has been narrowing for the last two decades. Only whites, however, are now dying off in unexpectedly large numbers in middle age, their excess deaths accounted for by suicide, alcoholism, and drug (usually opiate) addiction.”

Excerpt #2: “When the federal government finally weighed in on the side of desegregation, working-class whites were left to defend their own diminishing privilege by moving rightward toward the likes of Alabama Governor (and later presidential candidate) George Wallace and his many white pseudo-populist successors down to Donald Trump.”

Excerpt #3: “At the same time, the day-to-day task of upholding white power devolved from the federal government to the state and then local level, specifically to local police forces, which, as we know, have taken [white power] up with such enthusiasm as to become both a national and international scandal. The Guardian, for instance, now keeps a running tally of the number of Americans (mostly black) killed by cops (as of this moment, 1,209 for 2015), while black protest, in the form of the Black Lives Matter movement and a wave of on-campus demonstrations, has largely recaptured the moral high ground formerly occupied by the civil rights movement.”

Last month I was wandering around during a Savannah Film Festival after-party, and I noticed a white-haired guy sitting all alone at a table in a corner. I wasn’t entirely convinced it was Robert Loggia, but he sure was a dead ringer. And what did I do? Did I walk over and say “excuse me but I’m 95% convinced you’re Bob Loggia…am I right?” No, I said nothing, guarded coward that I sometimes am. Even if it wasn’t Loggia (he had Alzheimer’s and probably didn’t do a lot of travelling outside his Brentwood home), I’m sorry for not saying hello anyway. Because now he’s gone. Loggia’s first big breakout happened in Walt Disney‘s Elfego Baca series (’58 to ’60), and then he half-hibernated for over 15 years until his next distinctive performance in Blake Edwards‘ S.O.B. Loggia worked steadily since but delivered classic performances in five world-class films, four of them in the ’80s: Frank Lopez in Scarface, Eduardo Prizzi in Prizzi’s Honor, Sam Ransom in Jagged Edge, Mr. MacMillan in Big and Mr. Eddy/Dick Laurent in Lost Highway.