Elite journalists looking to see Alejandro G. Inarritu’s Carne y Arena, a 390-second virtual reality experience at next month’s Cannes Film Festival, will have to take a shuttle to some Cote d’Azur location away from the Grand Palais, where they’ll strap on the VR headset and take the trip. I’m guessing that the whole process — being picked up, driven to the viewing location, watching the short and then taking a shuttle back to base camp — will take an hour at least, and probably a bit more. But essential, of course. The latest collaboration between Inarritu + dp Emmanuel Lubezski, etc.

It’s a solemn emotional experience. A heart and humanity thing. What a would-be Mexican immigrant goes through in trying to cross the U.S. border, or something in that realm. I’m told that viewers won’t necessarily sit in a cozy chair as they watch it. They’ll just as likely stand or lie on the floor.

The full title is Carne y Arena (Virtually Present, Physically Invisible). Pic was produced and financed by Legendary Entertainment and Fondazione Prada, and will be presented during the entire Cannes Film Festival (5.17 to 5.28). A longer three-act version (the 390-second short augmented by a first and third-act experience of some kind) will be presented at Milan’s Fondazione Prada from June to December ’17. You can call it an “installation” as well as an experience, especially if you catch it in Milan. 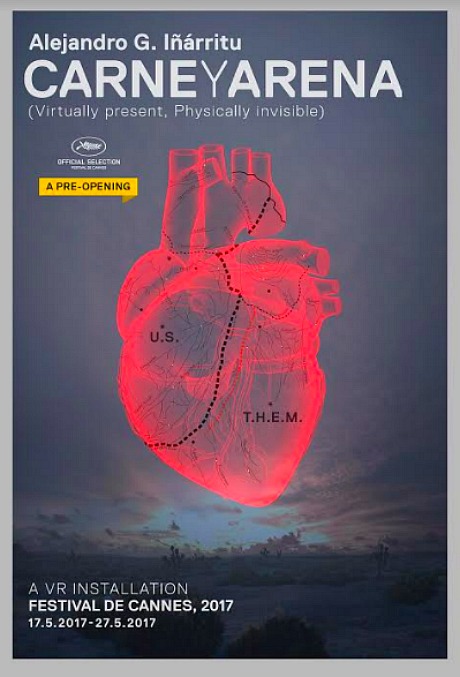 April 13, 2017by Jeffrey Wells10 Comments
« Previous post
What If Steve McQueen Had Behaved Differently in Bullitt?
Next post »
With Hollywood Might-Have-Beens Hiding In Tall Grass, Another Mostly Euro-Centric Cannes