4 Comments
Pulled Back In

Yesterday a planned Los Angeles premiere of Jeepers Creepers 3, an insignificant-sounding horror film directed by Victor Salva, was cancelled. It had been slated to screen at the TCL Chinese on Monday, 11.13, under the auspices of some kind of horror aficionado screening program organized by moviedude18, aka Kory Davis. The screening was cancelled over fears of negative protests and social-media agitation. The provocation is Salva’s criminal past, and more specifically a 1988 incident of child molestation that resulted in time. Salva did 15 months for this, and then laid low for a few years. But his notoriety blew up again when Powder, which wasn’t half bad, was released in ’95. In fact, I wrote an Entertainment Weekly story (11.10.95) about it.

Fred Zinnemann’s The Day of the Jackal is one of my favorite comfort flicks. I’ll watch it maybe once a year, and when I do it never fails to engage. What other respected thrillers have been about “how and when will the lead protagonist be stopped from carrying out an evil deed?” and with such impressive finesse? (I can’t think of a single one.) Jackal is so crisp and concise, so well disciplined. And I loved Michael Lonsdale‘s inspector, and Edward Fox was such an attractive and well-behaved sociopath. And so nicely dressed.

It’s been nearly 20 years since the 1997 remake with Bruce Willis and Richard Gere, and I don’t even remember it. It did pretty well financially ($159 million) so it must have done something right, but I haven’t the slightest interest in seeing it again.

What if Zinneman’s version and the remake had never been made, and what if, say, Steven Soderbergh had recently directed a just-as-good-as-the-Zinneman version with Ryan Gosling in the lead role, and it was about to be seen and praised at the Venice Film Festival and then open stateside a few weeks later? How would today’s popcorn inhalers respond to it?

“Fred Zinnemann’s The Day of the Jackal is one hell of an exciting movie. I wasn’t prepared for how good it really is: it’s not just a suspense classic, but a beautifully executed example of filmmaking. It’s put together like a fine watch. The screenplay meticulously assembles an incredible array of material, and then Zinnemann choreographs it so that the story — complicated as it is — unfolds in almost documentary starkness.

“The Day of the Jackal is two and a half hours long, and seems over in about fifteen minutes. There are some words you hesitate to use in a review, because they sound so much like advertising copy, but in this case I can truthfully say that the movie is spellbinding.” — from Roger Ebert‘s Chicago Sun Times review, 7.30.73.

I’ve heard a couple of genuinely positive responses to Our Souls At Night, the Robert Redford-Jane Fonda romantic drama that Netflix will debut on 9.29. Both tipsters have said it’s a really nice film with very winning performances. The Venice Film Festival reviews (expected to pop sometime late Friday) will tell the tale, of course. Why isn’t it showing at the Toronto Film Festival? I mean, why wouldn’t it? It’s not a bust — the film is somewhere between good and pretty good — so where’s the downside?

Excerpt from Amazon reader review of same-titled Kent Haruf book: “I don’t want to spoil the ending of this book. It takes an unexpected twist and isn’t all happiness. But the overwhelming impression this book leaves in your mind is of simple friendship that moves into love, and of two old people who discover they’re still able to learn and grow. It’s beautiful. There are no verbal fireworks, no peeking inside characters’ heads. Everything is observed from the outside. It’s simple, clean, human.” 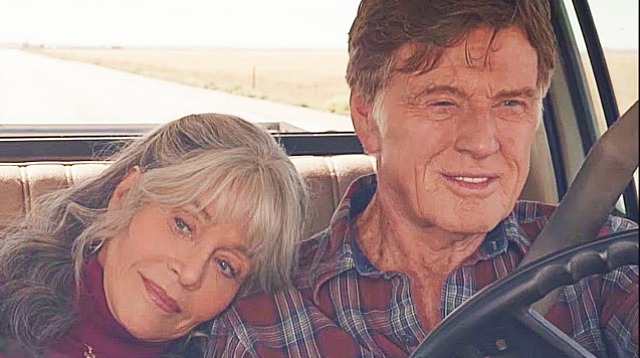 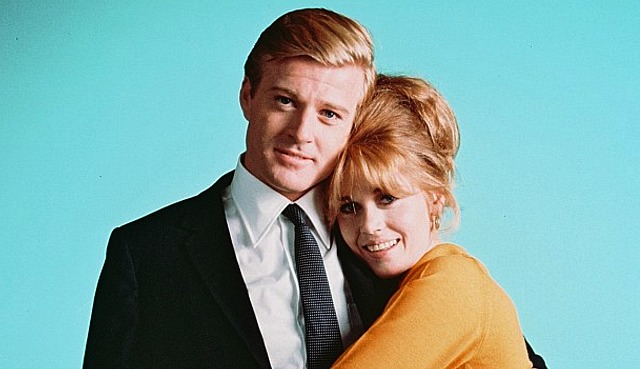 The title of Craig Zahler‘s Brawl in Cell Block 99, a prison drama about a mechanic (Vince Vaughn) sentenced to prison for smuggling guns, obviously alludes to Don Siegel‘s Riot in Cell Block 11 (’54). The trailer suggests it’s not so much about a brawl as an adjustment on the part of Vaughn’s good-guy character. It appears, in short, to have a couple of things in common with HBO’s The Night Of. Playing out of competition at the Venice Film Festival, and then a few days later at the Toronto Film Festival. Limited theatrical debut on 10.6, followed by VOD release on 10.13. I’m sensing this might be half-decent. Zahler’s last film was Bone Tomahawk. 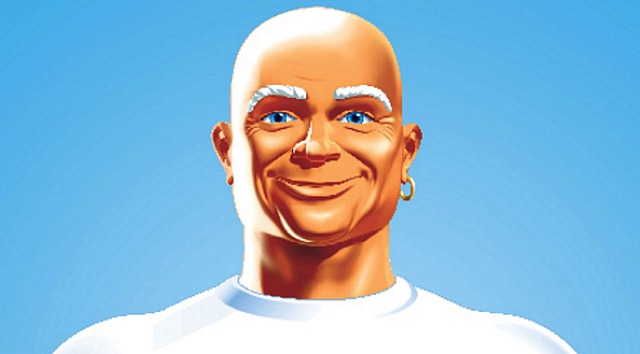 Melania Trump as she was deciding what to wear for this morning’s trip to besieged Houston area: “Obviously visiting flooded areas and offering support and comfort to Harvey victims won’t be a glammy photo-op thing. Even I realize that. Nonetheless I need to dress as if I haven’t the slightest interest in wading through water. Why should I pretend to be anything more than what I am — a pampered trophy wife who doesn’t want to know about life on the lower levels, much less get close to or reflect upon same? Stiletto heels reflect this mindset. I can’t be a hypocrite. My husband can pretend that he’s willing to rough it with his tan hiking boots, but not me…sorry.” 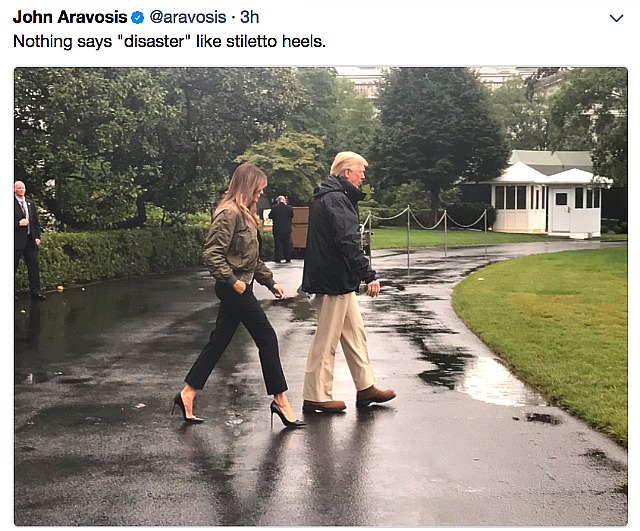 For me, good movies deliver the steady current, the bedrock reality of life. Year in and year out, there is always a cosmic pulse, rhyme and rhythm in the realm of the top 5% of films (i.e., not your sludge- or superhero-level flicks but real-deal serious films). They deliver the fundamental things that apply. Raggedy day-to-day life constantly dilutes and compromises these truths, or certainly makes them less evident. It is therefore better to live “in” movies with occasional detours into real life, rather than vice versa. I owe my sanity to movies, and will always be grateful for the joy and wisdom they’ve provided.

5 Comments
“I Don’t Give A Damn About Your Laws”

Yesterday’s news, but seriously. Trump said he assumed that the ratings on his Sheriff Joe Arpaio pardon “would be far higher” except for the irksome interference of Hurricane Harvey?

Darren Aronofsky‘s mother! has a “secret” URL — www.youllneveranswerthedooragain.com. It begins with a movable sepia-tone kaleidoscope thing that reflects the new one-sheet, and then it clicks into the latest clip — Jennifer Lawrence, Michelle Pfeiffer, “Why don’t you have kids?” 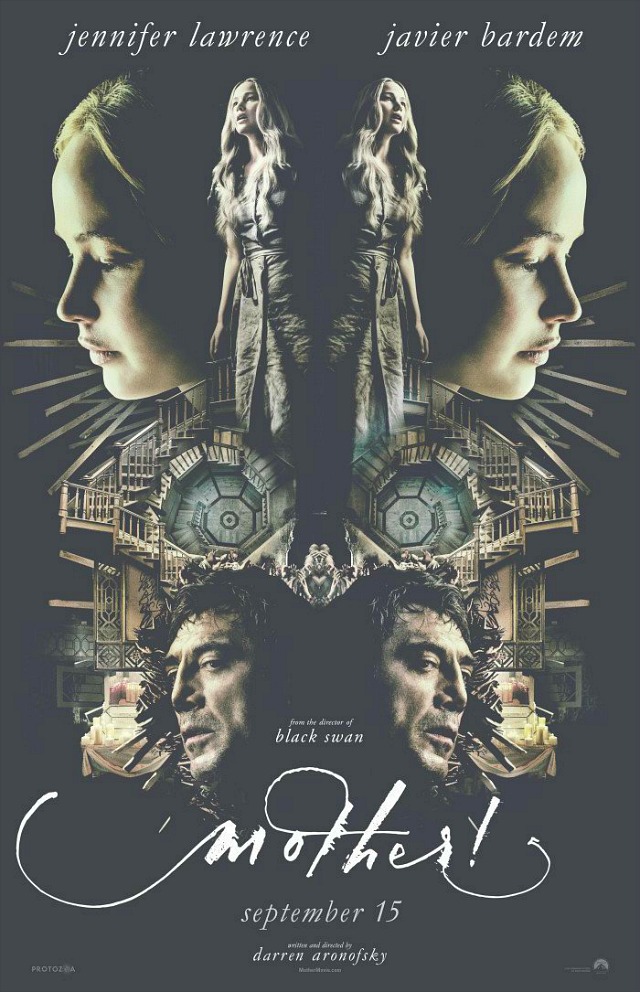