52 Comments
So Obvious That Mayor Pete Is The Best

Donald Trump‘s “tweets are…I don’t care! I get it. It’s mesmerizing. It’s hard for anyone to look away. Me too. It is the nature of grotesque things that you can’t look away.” — Pete Buttigieg to Fox News’ Chris Wallace during a 5.19 Fox News Town Hall. “I think if you look at the conduct of this administration and the conduct of this President, there’s no question that it is beyond the pale morally…to put it politely, it is legally questionable too…[Trump] may well have done things that deserve impeachment, but that’s for the Congress to decide.” Buttigieg got a standing ovation, by the way, from the Fox News-watching crowd.

God save us from the lazy, nostalgic plague of Joe Biden. 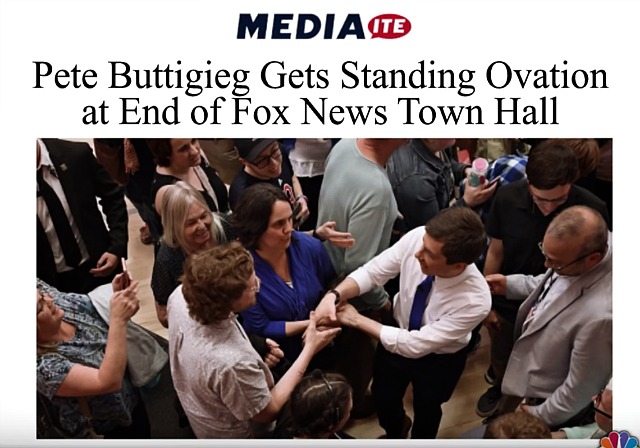 This Cannes Film Festival prelude has played before each and every film that has shown at this festival since…I don’t know when. I know it’s been playing since I became a Cannes regular 20-odd years ago. I can’t remember if it was playing during my very first visit in ’92.

I know that 85% or 90% of the time somebody will shout out “Raoul!!” when the prelude finishes. Ten years ago Roger Ebert wrote that the “Raoul!!” howl has “survived for 35 years that I know about.” Four years ago Evening Standard critic Derek Malcolm told BFI.org’s Charlie Lyne that it “dates back a good five or six years but not much more than that.”

The fact that Once Upon A Time in Hollywood director-writer Quentin Tarantino is asking Cannes journos and other first-lookers to refrain from spoiling the film after tomorrow’s big premiere tells you plenty. He’s essentially announcing that some “whoa!” plot element is threaded in.

“I love cinema, You love cinema,” Tarantino has posted on Instagram and Twitter. “It’s the journey of discovering a story for the first time. The cast and crew have worked so hard to create something original, and I only ask that everyone avoids revealing anything that would prevent later audiences from experiencing the film in the same way.” 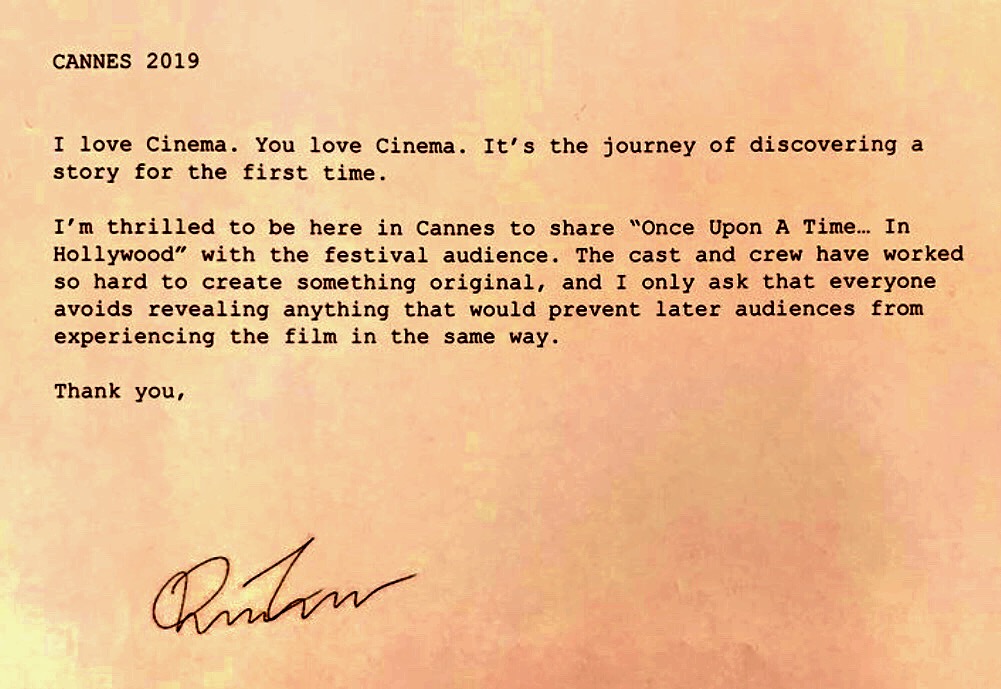 Hollywood Elsewhere hereby pledges to not spoil whatever Tarantino is referring to, but c’mon…he gave half the game away four weeks ago.

In a 5.3 interview with USA Today‘s Brian Truitt, Tarantino described Brad Pitt‘s Cliff Booth character as “an indestructible World War II hero and one of the deadliest guys alive who could kill you with a spoon, a piece of paper, or a business card. Consequently, he is a rather Zen dude who is troubled by very little.”

HE conclusion: “Okay, but how and why would an indestructible killing machine figure into a film that’s allegedly focused on hippy-dippy, head-in-the-clouds, peace-and-love-beads Hollywood? Why bring up killing at all when the 1969 Hollywood milieu was all about getting high and flashing the peace sign and reading passages from the Bhagavad Gita? Exactly — at a crucial moment Cliff will somehow go up against some folks who need to be corrected or otherwise interfered with.”

“There’s a special spiritual current that seeps out when an old guy admits to each and every failing of his life without the slightest attempt to rationalize or minimize…’I was a shit, I was an ayehole, how is it that I’m still alive?,’ etc. Straight, no chaser.

“It’s about the tough stuff and the hard rain…about addiction and rage and all but destroying your life, and then coming back semi-clean and semi-restored, but without any sentimentality or gooey bullshit.”

First the coffee cup, and now this — a water bottle hiding behind a guy’s leg.

Maybe that’s not quite the right way to describe it (especially given that Sciamma’s film is much more heated and desire-driven than Stanley Kubrick’s 1975 period classic, which is nothing if not dryly ironic, emotionally chilly and 100% asexual) but it’ll do until a better description comes along.

It’s only a period-flavored story of suppressed attraction and the gradual striking of sparks, but it’s about as perfectly done as this sort of thing could possibly be. Especially the coded use of the number 28. Double especially the final shot of Adele Haenel emotionally quaking as she listens to Vivaldi’s “Four Seasons.” 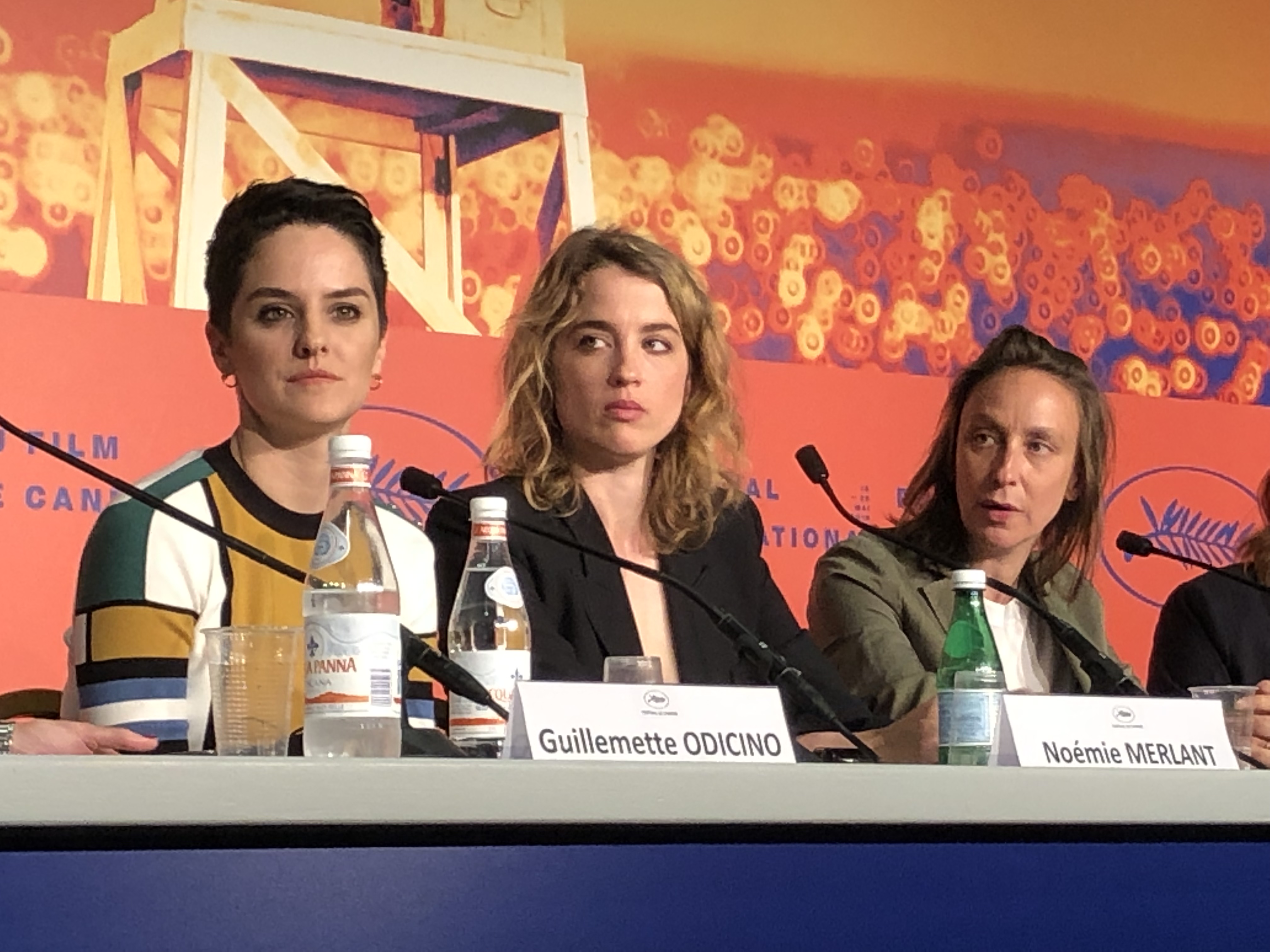