Last night I read a 2018 draft of Todd Phillips‘ Joker, written by Phillips and Scott Silver. It’s Scorsese-ish, all right — set in 1981 “Gotham,” tingling with echoes of Taxi Driver and The King of Comedy with a little touch of Death Wish. The basic philosophy is “the world’s a venal, plundering place so who can blame Joaquin Pheonix for becoming a killer clown?” It’s a stand-alone but at the same time it definitely feeds into the Batman legend. 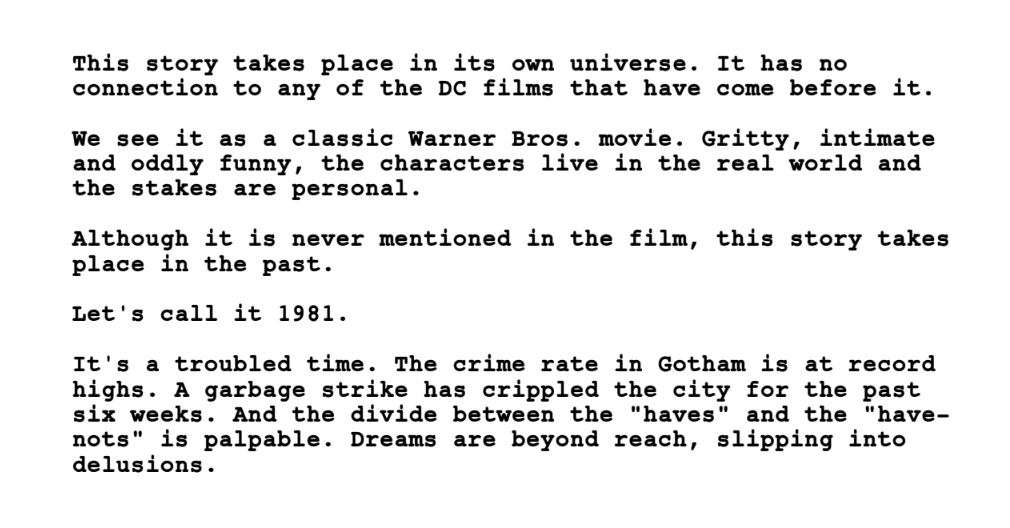 “If you can’t throw away $100 million dollars on a Ben Affleck action film that no one will watch, what is the point of even being in the movie business?” — genius-level line from Richard Rushfield‘s latest, just-posted Ankler column.

“As a woman unraveling while struggling to make sense of the deaths of her husband and son, Diane Kruger showed she could carry a movie in Fatih Akin‘s In the Fade. But she needs more textured material than she’s given in The Operative, a choppy espionage thriller.

“Pic casts Kruger as a Westerner making bold moves to disentangle herself and right a wrong after years of undercover Mossad activity, pulling in Martin Freeman as her former handler to help facilitate her exit. Writer-director Yuval Adler connects the dots of the convoluted plot with reasonable clarity, but The Operative only intermittently builds suspense.” — from David Rooney‘s Hollywood Reporter review.

Boilerplate: “The Inglourious Basterds actress plays an undercover Mossad agent who is sent to Tehran, Iran, where she masquerades as an English teacher in order to gather information about Iran’s secret nuclear program in this John le Carre-style spy thriller. Written and directed by Israeli filmmaker Yuval Adler (Bethlehem), the psychological espionage thriller is based on the spy novel “The English Teacher” by former Israeli intelligence officer Yiftach Reicher Atir.

39 Comments
Tarantino on Dalton: “Burt Who?”

For what it’s worth, the snippets of Renee Zellweger‘s performance in this Judy trailer seem to have that certain snap-crackle-pop. No telling how the film will play, but Zellweger will probably land a Best Actress nomination. Performances of this type usually do. Rupert Goold and Tom Edge’s film will open on 9.27 via Roadside (a likely Toronto Film Festival headliner), and in England on 10.4.

Boilerplate: “An adaptation of the Olivier- and Tony-nominated Broadway play End of the Rainbow, Judy is about Garland’s last few months during a run of sell-out concerts at London’s Talk of the Town.”

Garland had ten good years (mid ’30s to mid ’40s) before the gradual downswirl pattern (stress, anxiety, pills, self-esteem issues) kicked in. Garland was 31 when she made George Cukor‘s A Star Is Born, supposedly playing a fresh-faced ingenue but unvoidably looking like the battle-scarred showbiz veteran that she was. A barbituate overdose killed Garland at age 47, at which point she seemed 60 if a day.

Zellweger does all the singing, I’m told. I knew she could sing, of course, but sounding like Garland is another challenge.

Zellweger might be sufficient, good or great, but Anne Hathaway should have played Garland. She would’ve been perfect.

Liza Minnelli quote: “I just hope [the makers of this film] don’t do what they always do. That’s all I’ve got to say.”

But I did come to know Morales in the below IMDB-produced video, in which the former Grinder and Parks and Recreation costar talks with real feeling about her worship of Buster Keaton. I had the same reaction to her words that I’ve had whenever I’ve seen a gifted but unlucky actor, a veteran of almost nothing but underwhelming films and TV shows, shine in a brilliant Broadway play.

“Aaaah, so that‘s who Morales is!”, I muttered to myself. “She not only gets Keaton but thinks her contemporaries need to wake up and shake off their resistance to watching classic black-and-white films.”

It contains a predictably amusing performance by Kumail Nanjiani as an overwhelmed, too-sensitive-for-his-own good Uber driver, but it’s basically Kumail transferring his wry stand-up schtick to an action realm. Bautista struck me as too thick and gorilla-like to occupy the classic Schwarzenegger realm. Otherwise the basic idea behind Stuber is to bash, bruise, bludgeon and brutalize while leaning heavily on the cops-vs.-drug-dealers handbook.

Stuber appropriates Collateral‘s story and theme — a wimpish cab driver grows into a man of some consequence through an experience with a lone-wolf client with a violent job — while turning the dial up to 11. Torrents of coarse dialogue, gratuitous face-poundings, cartoonishly over-the-top stunts.