A friend has slipped me a May 2019 draft of Damien Chazelle‘s Babylon, his theatrical follow-up to First Man. (Chazelle is currently working on The Eddy, an eight-episode Netflix series set in Paris.) Babylon is a late 1920s Hollywood tale about a huge sea-change in the nascent film industry (i.e., the advent of sound and the up-and-down fortunes that resulted) and about who got hurt and who didn’t.

A la Quentin Tarantino‘s Once Upon A Time in Hollywood, Babylon (which may or may not be distributed by Paramount or Lionsgate) offers a blend of made-up characters and a few real-life Hollywood names of the time — Clara Bow, Anna May Wong. Paul Bern and an “obese” industry fellow who represents Fatty Arbuckle. (I’m presuming there are others.) I’ve only read about 40% of it, and I’m certainly not going to describe except in the most general of terms. It runs 184 pages, and that ain’t hay. 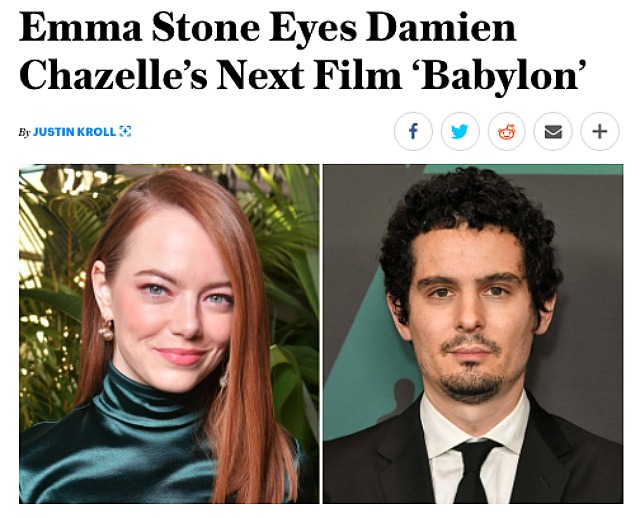 Most of Chazelle’s story (or the portion that I’ve read) is amusingly cynical and snappy, at other times mellow and humanist, and other times not so much. It takes place in the golden, gilded realms of Los Angeles during this convulsive, four or five-year period (roughly 1926 to 1931, maybe ’32) when movie dialogue tipped the scales and re-ordered the power structure. Everyone above the level of food catering had to re-assess, re-think, change their game.

It seems to me that Chazelle wrote Babylon with a jaded, somewhat angry attitude. When a couple of scenes tip into near-porn you say to yourself, “Yeah, I get it — he’s showing this stuff in quotes…as commentary.” Laugh if you want but the audience will be attending this party in the company of a lot of self-obsessed, deluded or ruthless types. Anyway, that’s all.