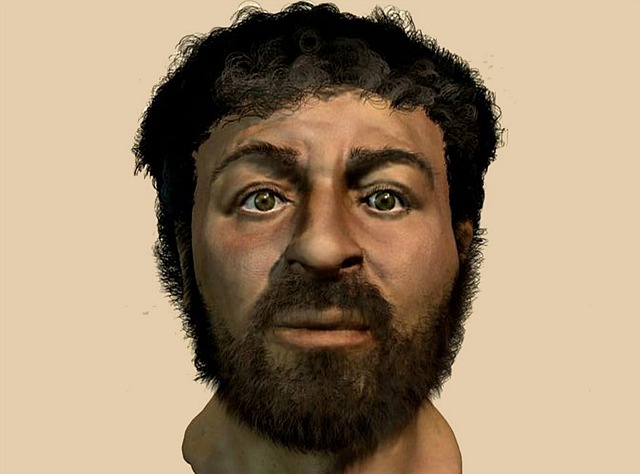 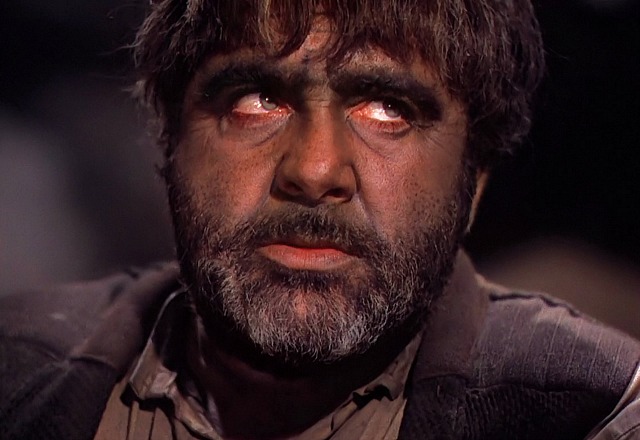 Akim Tamiroff in For Whom The Bell Tolls.
August 19, 2019 8:24 pmby Jeffrey Wells
41 Comments
Dean and Cronkite

It was announced almost three weeks ago that Chris Pine, 39, will play Walter Cronkite in Newsflash, a real-time drama about how the trusted CBS anchorman and various CBS staffers handled the incoming news of JFK’s assassination on 11.22.63.

I’m presuming Pine will have to either gain weight or wear chubby-face makeup in order to resemble the 47 year-old Cronkite, who was rounder and older-looking on that day, even by the standards of the early ’60s, and with a face, unlike Pine’s, that wasn’t especially handsome or chiselled.

But at least Pine will make for a better Cronkite than Seth Rogen would have…good God, that would’ve been terrible! Responsible parties (including director David Gordon Green) actually wanted Rogen to play the legendary newsman.

I’ve read a draft of Ben Jacoby‘s Newsflash script. I found it steady and convincing — smoothly written, well-researched, not brilliant but very decent. Cronkite is the stalwart, steady-at-the-tiller hero, of course. CBS honcho Jim Aubrey is the villain of the piece.

I don’t know when Newsflash will shoot (probably not for a while) but Pine will also portray former White House attorney and Watergate whistle-blower John Dean in an Amazon feature.

A script for the Dean film apparently hasn’t been written yet.

Variety‘s Matt Donnelly: “The film will follow the life and political saga of Dean, who served as White House counsel for President Richard Nixon from July 1970 through April 1973.

The Dean film will probably turn out to be a more interesting project than Newsflash, if for no other reason than the built-in dramatic conflict (i.e., a young believer in Nixon and the Republican cause experiences an agonizing re-appraisal when the Watergate shit hits the fan).

The Toronto Film Festival website is reporting that Katemir Balagov‘s Beanpole, which I reviewed three months ago in Cannes, is a North American premiere. Which, if accurate, would mean it won’t show first in Telluride. But it will do that. The correct TIFF designation, therefore, should be Canadian premiere. Beanpole‘s Rotten Tomatoes rating stands at 100%. 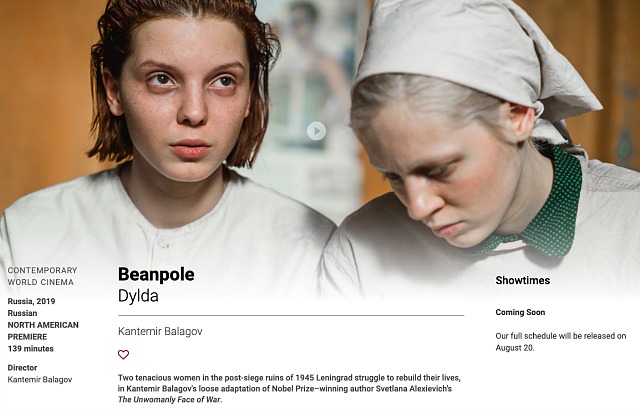 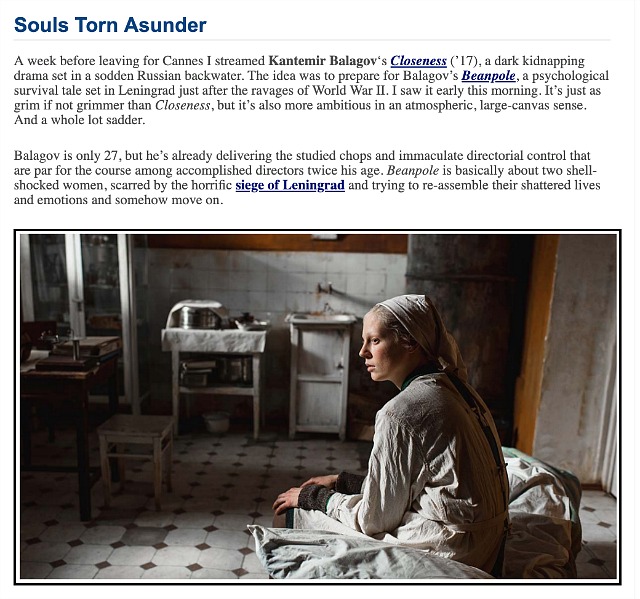 So in order to see Steven Soderbergh‘s Let Them All Talk sometime next fall, I’ll have to pay a subscription fee to HBO Max. Expected to launch sometime next spring. HBO Max will be a streaming service for all things Warner Media, right? HBO, Warner Bros. films and TV content, TCM, etc.

The Wall Street Journal has reported that WarnerMedia is mulling “a $16-to-$17-per-month price tag, which would be $2 more than a standalone HBO subscription and about $4 more than Netflix,” per qz.com.

I’ve been an HBO Now subscriber for two or three years, but management apparently wants me to follow HBO Max instead. I’m also being urged to subscribe to the forthcoming Apple TV and NBC-Universal streaming services also. No way would I even consider becoming a Disney Channel subscriber.

Written by Deborah Eisenberg, Let Them All Talk has been described as an older-woman’s ensemble drama (Meryl Streep‘s noteworthy author + Candace Bergen and Dianne Weist). Lucas Hedges plays Streep’s nephew; he and Gemma Chan‘s character apparently get something going.

Lensing began in NYC last week; it’s presently shooting aboard the Queen Mary 2 during an actual voyage to England.

If you find this post rote and uninspired, you’re right — I agree with you.

I’m sorry but I’m sensing a fairly brittle vibe here. Tension, arched backs, porcupine needles. Par for the course for a series about a Today-like show, right? Maybe, but I really don’t want to watch this.

“After her partner of 15 years, Mitch Kessler (Steve Carell), is fired amidst a sexual misconduct scandal, Alex fights to retain her job as top newsreader while sparking a rivalry with Bradley Jackson (Reese Witherspoon), an aspiring journalist who seeks to take Alex’s place.

In an 8.12.19 HE riff about the teaser, it seemed as if Carell was going to play, as I put it, “some kind of pompous asshole, or perhaps a character based in part on Matt Lauer.”

Regional film critic: “Like that all-too-common shot of the hero (or villain) walking away from an explosion right behind him, there’s a relatively recent film cliche that’s annoying the hell out of me. I call it the ‘baring intimate secrets in front of a crowd of total strangers‘ scene.

“It occurs in Blinded By the Light when the protagonist reveals his relationship with his father in front of a school assembly. It’s in Rocketman when (if I remember correctly) Elton John tells a packed Wembley Stadium that he’s gay. It’s also in Crazy, Stupid, Love when Steve Carell bares his soul during his son’s eighth-grade graduation ceremony. Plus other soul-baring moments that I’m not recalling.

“No human has ever done anything like this. No. One. Ever. So when did screenwriters think crafting a scene like this makes dramatic sense? Can’t they think of a better way to wrap up a story?”

HE to regional film critic: “Good point. One of the main reasons that I hated Crazy Stupid Love, actually, was that climactic confession from Carell’s character. My blood boiled.

“But there’s one ’emotional confession befire strangers’ scene that definitely works, and I think the world agrees with me. It’s the second-to-last scene in Cameron Crowe‘s Jerry Maguire. (’96). An exhilarated Tom Cruise crashes Renee Zellweger‘s woman-support-group meeting and lays it all on the line, etc. For all I know this scene inspired other screenwriters to try and copy it.

“The thing that Crowe got right and others didn’t, of course, is that Cruise offered his confession in front of six or seven women in a living room, and not to thousands of fans in Wembley Stadium.”