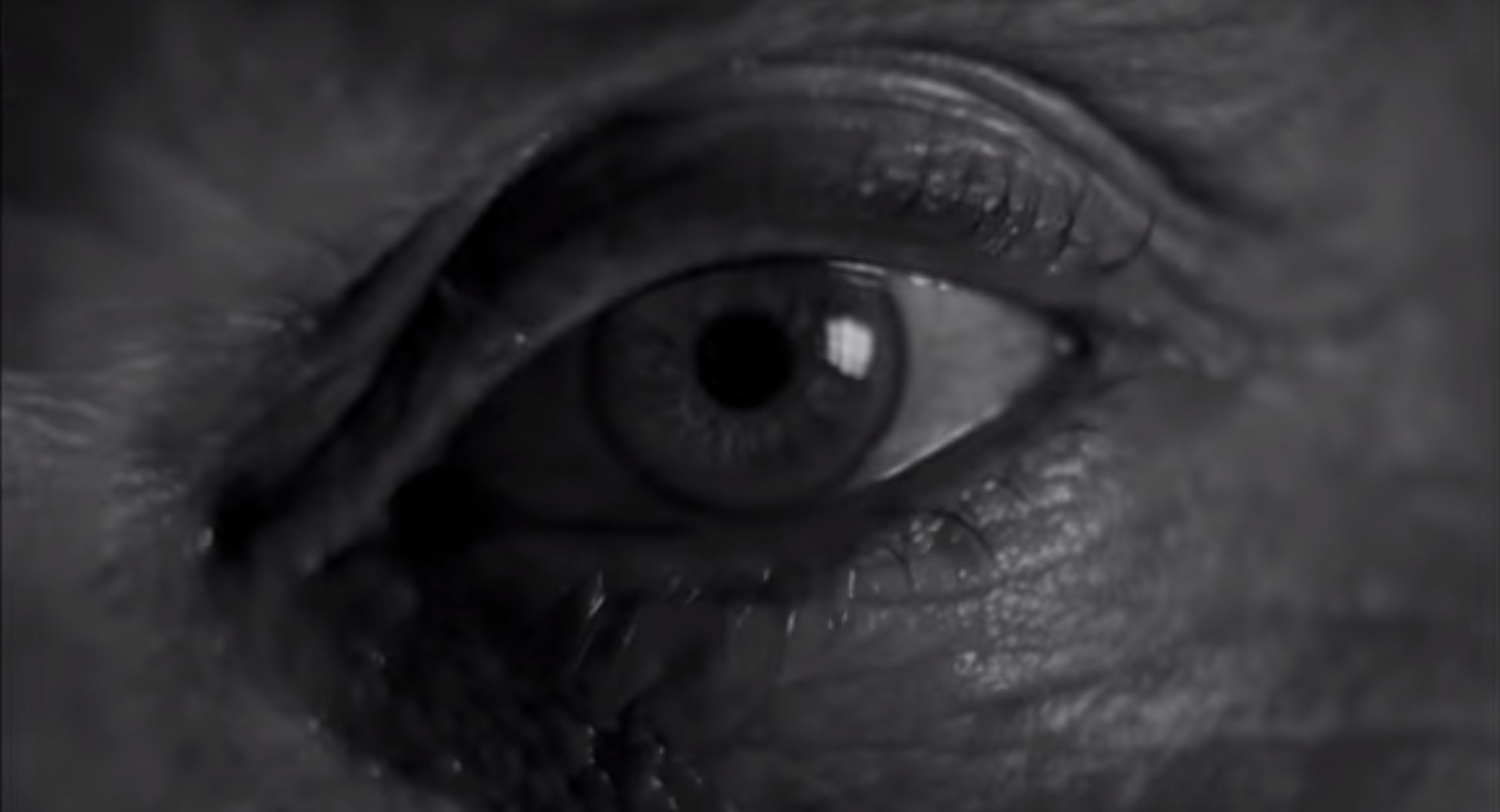 Two days after the Toronto Film Festival debut of A Beautiful Day in the Neighborhood, it seems obvious if not inescapable that Tom Hanks‘ performance as Fred Rogers will be campaigned as a Best Actor thang. If this happens David Poland would be “surprised”, but he’s nonetheless convinced that Hanks can’t win against Joker‘s Joaquin Pheonix and Marriage Story‘s Adam Driver. Perhaps not but by the calculus of the Poland curse, this is almost a dead-to-rights guarantee that Hanks will collect his third Best Actor Oscar. 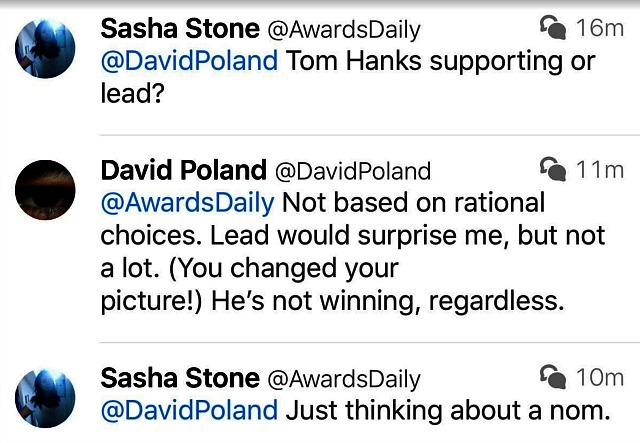 Past Poland Curse victims: Rachel Getting Married (which Poland called “the best American film of the last 15 years“), Munich, Dreamgirls, Phantom of the Opera, Quills, Finding Forrester and the Reverse Poland Curse trio of The Assassination of Jesse James By The Coward Robert Ford, Zodiac and There Will Be Blood (all of which Poland panned as “the trilogy of Critical Onanism,” and therefore provided an awards-season headwind). 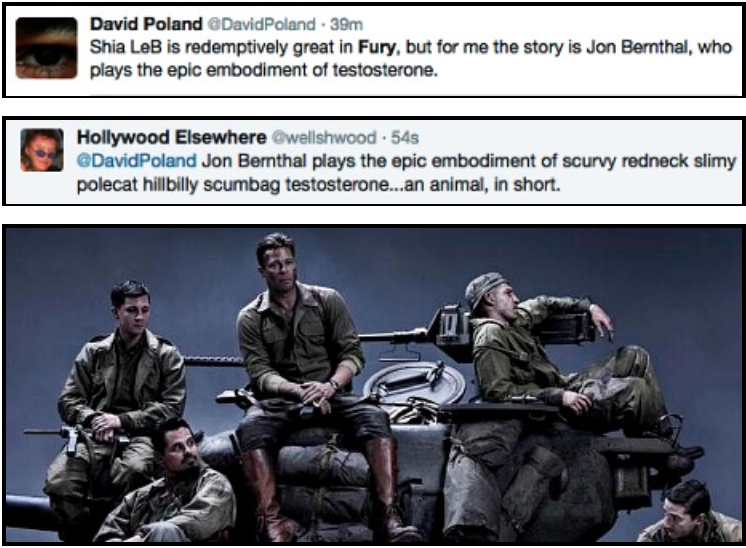 And, just as significantly, she’s launched her campaign with a totally killer ad called “Undercover.” Produced by Putnam Partners, the ad shows Plame driving a Chevy Camaro backwards on a dusty rural road (and I mean tear-assing along at 50 or 60 mph like Mel Gibson in an early ’90s Lethal Weapon flick) as she talks about her contrarian history.

Lorene Scafaria‘s Hustlers (STX, 9.13) has screened in Toronto, but I haven’t heard zip from anyone about Los Angeles screenings or even a link. You cannot trust the current 96% Rotten Tomatoes score. Or the 80% Metacritic rating. Not really, not completely. Because most of the critics are reviewing the gender politics aspect rather than just the film itself. Only Hollywood Elsewhere can be counted upon to deliver a throughly frank, straight-from-the-shoulder assessment. And it’s looking now as if I’m going to have to buy a ticket on Thursday night. 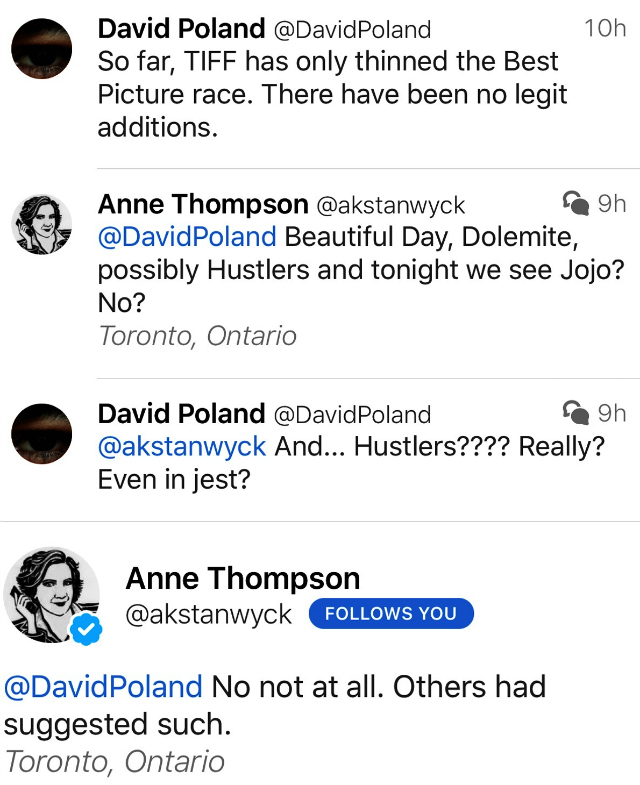 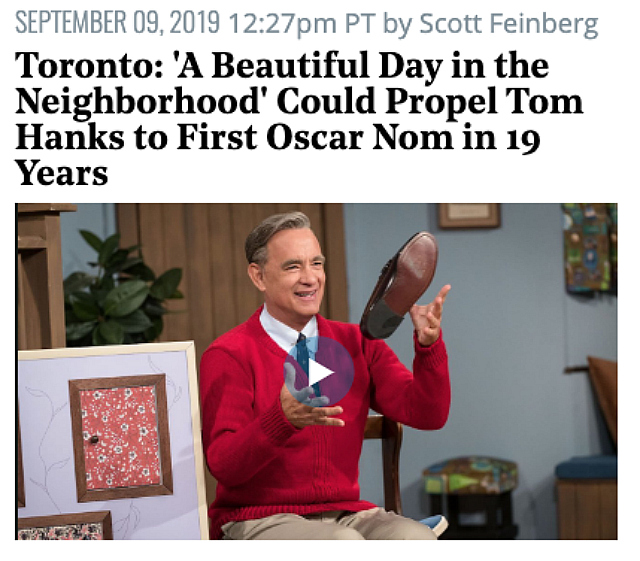 The press and marketing hype that has been inflating expectations for Taika Waititi‘s Jojo Rabbit (Fox Searchlight/Disney, 10.18) collapsed in a heap after last night’s Toronto Film Festival screening. Early reviews suggest that the broad “anti-hate satire” may find favor among younger audiences and perhaps the New Academy Kidz, but the over-40 contingent will be frowning and tut-tutting for the most part.

Right now Jojo has a 55% rating at Rotten Tomatoes and 49% score with Metacritic. Do those numbers indicate an Academy contender or perhaps a box-office go-getter? I don’t want to be the one to say it.

“Jojo is a totally irresponsible movie. The amount of anti-Semitic and Holocaust jokes played for laughs is disturbing.” — World of Reel’s Jordan Ruimy.

“This spectacularly wrongheaded ‘anti-hate satire‘ (as per the how-the-hell-do-we-market-this-thing? ad campaign) is the feature-length equivalent of the ‘Springtime for Hitler’ number from Mel Brooks’ The Producers, sans context and self-awareness. It takes place in a goofball period la-la land of its own creation, with sets as minutely detailed and shots as precisely composed as those in a Wes Anderson fantasia. Indeed, Jojo Rabbit suggests what that dapper hipster auteur might generate if he was to remake Elem Klimov’s hallucinatory, horrifying World War II epic Come and See, and that’s not a compliment.” — Slant‘s Keith Uhlich.

“Taking straight from the Chaplin playbook, Waititi’s Hitler is a Mr. Bean-esque figure, hammed up to eleven as the invisible friend of young Jojo Betzler (Roman Griffin Davis). He leaps around, talks in a thick approximation of a German accent and encourages young Jojo to be the best little Nazi in the whole of the Third Reich. He is, undoubtedly, the worst thing about the film — distracting and one-note. It is possible to parody Hitler successfully, but in leaning too heavily on basic mockery, there’s nothing new that this performance brings to the table.” — Little White Lies‘ Hannah Woodhead.

“[Waititi’s decision to play a fantasy Adolf Hitler buddy figure] often feels like a way of distracting us from the truth, an elaborate smoke and mirrors act to fool us into believing Jojo Rabbit has something new to offer. Because while there are some initially amusing moments given the outlandish conceit, Waititi doesn’t really know what to do with his imaginary Hitler past an increasingly repetitive cycle of decreasingly funny acts of idiocy. He’s essentially a single sketch character and while Waititi plays him well, there’s only so much we need of him.” — The Guardian‘s Benjamin Lee.

“I couldn’t care less what Scott Feinberg or anyone else says. I’ll put my money on Just Mercy winning the Audience Award in TIFF and being the one to beat for the Best Picture Oscar. It is this year’s Green Book — except it’s told through a black lens and pitched directly at a black audience. There are two white characters of note — Tim Blake Nelson and Brie Larson — who have maybe 15 minutes of screen time between them.

“Of course it’s conventional, but then so was Green Book, The King’s Speech, Spotlight, Argo and a ton of others. The transgressive Birdman-type winners are much fewer and further between, and tend to happen in years when here isn’t a big heart-tugging crowd-pleaser in the mix.”

HE comment: So Just Mercy is another Academy-pleaser by way of an emotional comfort bath, but at the same time it might be some kind of corrective makeup for the Best Picture triumph of Green Book, which was attacked for being insufficiently woke in its depiction of 1962 America? I was in heaven when the Academy told the SJW zealots to shove it up their ass by giving the Best Picture Oscar to Green Book. On the other hand one of the most depressing, suicidal-thought-inspiring events of my entire life was when The King’s Speech won the Best Picture Oscar. It made me want to buy packets of heroin.