Yesterday three nice people (two guys and a gal) kicked the Bill-and-Monica saga around. I was one of the guys, but that’s as far as I’ll go with specifics. It started with a dispute about how much of a predator Bill Clinton might have been and how willing if not eager Ms. Lewinsky might have been.

Guy #1: Monica Lewinsky was a 22-year-old intern and he was the President of the United States. “It’s honestly hard to think of a dynamic that is more clearly an egregious abuse of power,” wrote lawyer Lindsey Barrett on Twitter.

American columnist Kristen Powers tweeted, “This actually shouldn’t be so hard. Hillary isn’t responsible for what her husband did, but she should be able to recognize it as an abuse of power.”

Last March Lewinsky wrote in Vanity Fair that she considered the affair “a gross abuse of power”, adding “he was my boss…he was the most powerful man on the planet”.

HE: That aside, are you actually contending that Bill Clinton harassed and bullied Monica Lewinsky into having an affair against her will? Don’t various accounts argue with this notion quite strenuously?

Gal #1: “She might have been ample and Rubenesque but Monica was hot. Clinton didn’t pray on some poor ignored chubby girl. She flirted outrageously with him and he flirted back. He could not resist her because she was HIS type. Beanie Feldstein is not THAT type. This casting choice alone tells you this dramatization is going to be a one-sided story of a sexual predator, which is 100% wrong. She was in her early 20s and very, very willing.”

HE: We all understand the power dynamic, but how does that work in the theoretical case of the widowed Michael Douglas in The American President? No hitting on any White House staffer, regardless of age or position? Only lobbyists like Annette Bening’s Sydney? Who exactly is a U.S. President allowed to show interest in, given the huge imbalance of power and the likelihood of being attacked down the road by #MeToo?

Otherwise, bullshit. 22 year-olds are not babes in the woods or poor little lambs. My rule is that you’re on you’re own and expected to live and cope in the adult world when you hit 20 or your junior year in college. And certainly by age 21. (Any older guy who makes a play for a sophomore or freshman or any woman in her late teens is definitely crossing the line.) But it all changes at 20 or 21, and certainly by age 22, or a year past graduation.

Clinton is/was an opportunistic hound, but so was Benjamin (“the father of France”) Franklin. So was Warren G. Harding. So were FDR, JFK, Gary Hart. Not every powerful politician with a yen for the ladies is necessarily a criminal predator. Or were they all Harvey Weinstein in your eyes?

Men and women tend to use and exploit each other in the quiet corridors of power. Lewinsky knew what she was doing. She saw an opportunity, turned on the alpha, scored and then expected to be compensated with some kind of job advancement. Which is an occasional benefit from affairs of this sort. Pay for play has been a common dynamic in business & government cultures for quite a while now. She became irate and conflicted and given to Linda Tripp confessions when she wasn’t shown what she calculated was her due.

Last night I watched Robert Clift and Hillary Demmon‘s Making Montgomery Clift (1091 Media, streaming on 10.15), which may be the most deep-down accurate and highly complex portrait of the closeted, achingly sensitive, Oscar-nominated actor (best known for From Here To Eternity, Red River, I Confess, Freud, Judgment at Nuremberg, The Misfits) ever presented on a screen. Seriously — it’s really something else.

I’ve read two Clift biographies (Robert LaGuardia‘s “Monty” and Patricia Bosworth‘s “Montgomery Clift: A Biography“), and I came away from this viewing what felt like a more intimate, finely textured understanding of who the poor guy really was.

I was afraid at first that the film might be some kind of family-approved gloss-over, but it’s not. It feels like an honest, upfront, no-bullshit assessment. Nobody’s afraid or reluctant to discuss anything.

It contends, for one thing, that while Clift was closeted he wasn’t conflicted or tortured over his sexuality.

It goes a little soft in talking frankly about the alcohol and drug addictions that ended Cliff’s life at age 46 (from a heart attack), but it insists that despite everyone having concluded that Clift spent the last ten years of his life slowly committing suicide, he loved living and wanted to keep going as best he could for as long as he could. The conversational tapes and movie footage reveal a relatively happy, spirited, engaged, curious, intellectually agile fellow for the most part.

It’s especially fascinating because Brooks Clift, dissatisfied with the LaGuardia biography and even the respected Bosworth chronicle, wanted to write his own biography of his younger brother, but never got it done. And so Robert, utilizing all kinds of movies and tapes that his father had kept, has kind of written it for him, in a way. He’s told the tale that his father would have.

She cackled and fainted and the bumblefucks hated her guts, but Hillary Clinton was no dummy. She probably still isn’t. 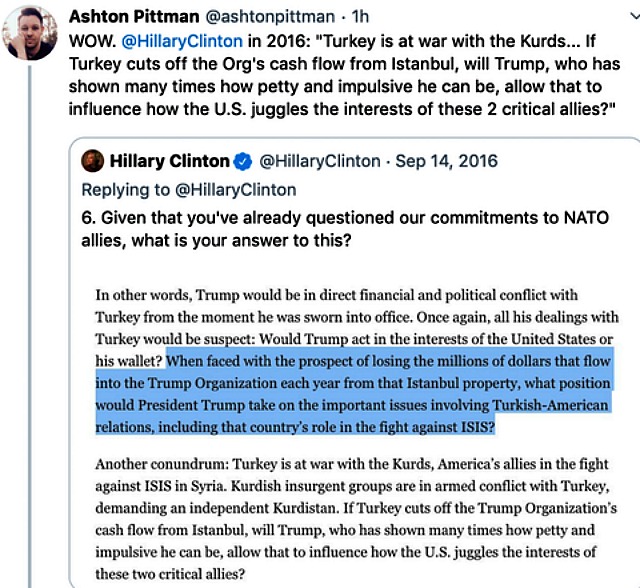 I finally saw Ang Lee‘s Gemini Man last night, and wouldn’t you know I’d pick a screening that didn’t show the 4K high-frame-rate 3D version? I saw a plain old 2D at 24 fps version, but it looked fine. And I was never in any serious pain during the 117 minute running time.

Yes, Gemini Man has a lousy 30% rating on Rotten Tomatoes, but I found it to be an agreeable so-whatter. It diverts, it moves along, it’s not overly irksome. Especially during the first 25 to 35 minutes.

Will Smith does a reasonably good job of playing two versions of an ace professional assassin named Henry Brogan, or more specifically his own 50 year-old self along with a digitally composed 20something version (aka “Junior”). And I like the deft way that Lee cuts away from the grisly stuff from time to time.

I didn’t “turn” on Gemini Man, exactly, but it gradually let me down, and I found myself sinking deeper and eeper into my seat. It gradually hit me, in other words, that the story was kinda routine in a flat-footed way. There were basically too many cooks working on too many drafts for too many years, and so the script feels over-written, over-honed, over-edited, ground into mush. It feels like re-heated leftovers.

But the de-aging VFX are better than The Irishman‘s in one respect. In Martin Scorsese‘s world-class film the face and hair styles give to Robert De Niro, Al Pacino and Joe Pesci are definitely younger but the bodies are their own — older, chunkier, less than athletic. Will Smith’s “Junior”, on the other hand, is slim and lean and a physique of a workout Nazi.

That Greenpeace banner allegedly hanging outside Trump Tower in Las Vegas and lambasting Donald Trump for betraying the Kurds is presumedly a deepfake. Not to diminish the horror of the Syrian-Kurd-ISIS situation, but as long as we’re talking deepfakes I prefer the below variation.