The vibrant, razor-sharp image quality of the 1962 Mutiny on the Bounty has never been properly captured for home viewing — not really.

The 2006 DVD claimed to be a “new digital transfer from restored 65mm elements,” but I was told back then that it was actually harvested from 35mm elements that reflected (but didn’t actually constitute) the 65mm version. The 2011 Bluray looks fairly crisp and robust, but at the same time it looked to me as if the 2006 harvest was simply uprezzed to 1080p. The cost of harvesting from the original 70mm elements may have been too costly, or perhaps the elements had become so degraded that a restoration wasn’t worth the candle.

All to say that in a perfect world this flawed but interesting epic would probably look even better with a nice 4K re-do. For streaming, at least, if the cost of producing and marketing a new 4K disc isn’t feasible. Even in this death-of-physical-media age, I continue to hope for 4K versions of the major large-format films of the ’50s and ’60s. A 4K Ben-Hur, drawn from an 8k scan of the original 65mm camera negative, would be a must-own.

I’ve said two or three times that the lure isn’t Mutiny on the Bounty itself (although many portions are quite good) as much as how luscious it could look if given a proper blue-chip restoration. This mostly-good, partly-problematic sea epic was shot in Ultra Panavision 70.

I can’t even find the link to an August 2006 piece about the DVD version, but here’s a portion:

“Say what you will about the ’62 Bounty — historical inaccuracies and inventions, Marlon Brando‘s affected performance as Fletcher Christian, the foundering final act. The fact remains that this viscerally enjoyable, critically-dissed costumer is one of the the most handsome, lavishly-produced and beautifully scored films made during Hollywood’s fabled 70mm era, which lasted from the mid ’50s to late ’60s.

“Roger Donaldson‘s The Bounty (’84) is probably a better Bounty flick (certainly in terms of presenting the historical facts), but the ’62 version has more dash and swagger. It has a flamboyant ‘look at all the money we’re pissing away’ quality that’s half-overbaked and half-absorbing. It’s pushing a kind of toney, big-studio vulgarity that insists upon your attention.

“And the ’62 Bounty definitely has first-rate dialogue and editing, and three or four scenes that absolutely get the pulse going (leaving Portsmouth, rounding Cape Horn, the mutiny, the burning ship). And Bronislau Kaper‘s score delivers vigor and majesty. (A critic in ’62 wrote that his music “saws away intrusively at times,” but the intrusions are agreeable.)

“You could argue that this Bounty is only nominally about what happened in 1789 aboard a British cargo ship in the South Seas. It’s more about early ’60s Hollywood than anything written by Nordhoff & Hall.

“The ’62 Bounty is mainly a portrait of colliding egos and mentalities — a couple of big-dick producers (Aaron Rosenberg was one), several screenwriters, at least two directors (Lewis Milestone, Carol Reed) and one full-of-himself movie star (Marlon Brando) — trying to serve the Bounty tale in ’60, ’61 and ’62, and throwing all kinds of money and time and conflicting ideas at it, and half-failing and half-succeeding.

In 2011 HE commenter “Manitoba” wrote that he found “a great account of the replacement of director Sir Carol Reed in Trevor Howard‘s authorized biography “A Gentleman And A Player” by Vivienne Knight.

“British members of the cast were so outraged by the firing of Reed that they demanded a meeting with MGM studio chief Sol C. Siegel. Led by Howard, they marched into his office. He rose to greet them. ‘Gentlemen, before you say anything, I want you to understand one thing,’ Siegel said. ‘The only expendable commodity in a great movie, is a good director.’

“The book claims that replacement Lewis Milestone soon realized the film was actually being made by a committee of three — Brando, producer Aaron Rosenberg and writer Charles Lederer, who was trying to catch up while ‘bedevilled by Brando’. Milestone realized that the wisest policy was to ‘let it ride.'”

Portions of the above are lifted from a post that appeared on 11.2.11.

Along with Eddie Murphy‘s Rudy Ray Moore and Ruth E. Carter‘s costumes, Da’Vine Joy Randolph‘s supporting performance in Dolemite Is My Name is a stand-out. Last weekend I became one of the last journos to finally see Dolemite. Since then there’s been no ignoring that Randolph’s “Lady Reed” is the emotional center — the poignant performance that stays with you. And so I decided to put her on my Best Supporting Actress list. And in so doing I discovered that Awards Daily‘s Sasha Stone, Blackfilm’s Wilson Morales, Gold Derby honcho Tom O’Neil and Variety‘s Tim Gray feel the same way.

There also doesn’t seen to be much doubt that Marriage Story‘s Laura Dern is the leading Best Supporting Actress contender at this stage, and that Hustler‘s Jennifer Lopez is in the first runner-up position. 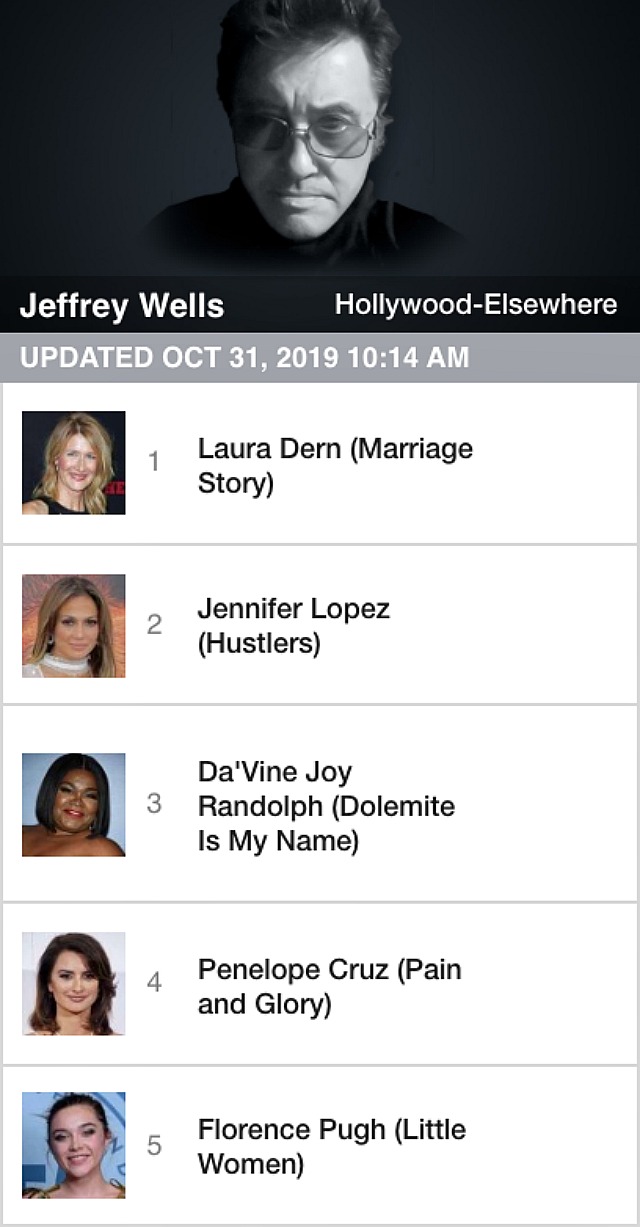 Representative Katie Hill should not have been pressured to resign over a consensual extramarital relationship with her campaign finance manager. It’s nobody’s business, and has no bearing on anything. Hill was torpedoed by ugly rightwing cyber-goons, and also, apparently, by her estranged husband Kenny Heslep, whom she’s described as “abusive.”

More and more embarassing photos would have been leaked, Hill said earlier today, and she simply had to end it. House Speaker Nancy Pelosi said that Hill made “some errors in judgment that made her continued service as s member untenable.” But only because of the determination of rightwing uglies to further humiliate her.

What’s happened to Hill is sickening. Yes, she indulged in intemperate and reckless behavior to some extent, but she did nothing “wrong”. It was just recreational whatever. Who cares?

In a farewell speech before Congress that was delivered earlier today, Hill said the there was a “double standard” and “misogynistic culture” that resulted in her decision. “I’m leaving,” she stated, “but we have men who have been credibly accused of intentional acts of sexual violence and remain in boardrooms, on the Supreme Court, in this very body and, worst of all, in the Oval Office.”

In response to a question about what The Irishman might’ve been if he and Robert DeNiro had switched roles, Al Pacino ignored the hypothetical in favor of a half-century-old recollection from an Actor’s Studio acting class, Lee Strasberg in attendance, sometime around ’68 or ’69. (I think.) Captured by Netflix guys during last weekend’s Irishman press conference at the Four Seasons, which I attended. A great story, passed along with typically exuberant Pacino panache. It starts around the 11-minute mark. (Thanks to Netflix for providing the video.)

A few days ago the Broadcast Film Critics Association announced its Best Documentary nominations. The awards will be presented on Sunday, 11.10, at BRIC in Brooklyn, per longstanding tradition.

The org’s top nominees are The Biggest Little Farm, Apollo 11 (an HE fave) and Peter Jackson‘s They Shall Not Grow Old (ditto). I’m a loyal and respectful BFCA member, but ignoring A.J. Eaton and Cameron Crowe‘s David Crosby: Remember My Name is, no offense, deranged. The film is mystical, mythical, uplifting and brazenly honest — it restoreth your soul. And it doesn’t matter if Crosby didn’t get along with Scott Feinberg two or three months ago. Please…a non-issue.

HE’s list of the finest and most award-deserving 2019 documentaries, 14 in all and in this order:

On Saturday, 11.2 Once Upon A Time in America‘s Quentin Tarantino, Leonardo DiCaprio and Brad Pitt will drop by the New Beverly Cinema for a post-screening q & a. DGA members were notified of this a while back, and also informed of numerous opportunities to re-see OUATIH. The appearance will be streamed to certain select venues but not to the general public. A version of the discussion will probably show up on YouTube sooner or later. 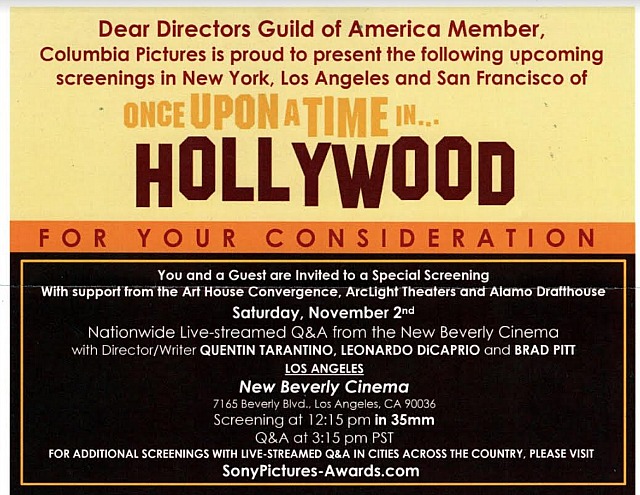 Last night and this morning three kneejerk comment-threaders — Bruce Taking a Nap, Overlord and Sunset Terra Cotta — tried the same old “rumble scooters are not motorcycles” superiority schtick this morning, but I bitch-slapped them into submission.

HE to macho numbskulls: “Did you know that manual-shift four-wheel vehicles (dwindling as their numbers may be) are ten if not fifteen times cooler and more manly than automatics? And that guys who drive automatics are not, in fact, men? It’s true. Why? The tactile effort of gear-shifting, of course. And the extra-loud rumble of a well-tuned, muffler-free classic Mustang 289 cc engine….oooohhh, mama! Only emasculated, constantly-texting pussies drive automatics. Ask the ghost of Steve McQueen.

“God, go to Europe one of these years. You’ll find millions of sizable rumble hogs (some smaller than mine, some larger) on the streets of Paris, Rome, Berlin, etc. And nobody spray-pisses about the difference between choppers and rumble hogs. You’re so deeply and profoundly impressed with the studly regimen of shifting gears with your left foot. I’ve been there (German-made BMW yellow jacket from late ‘07 to ‘09) and it barely matters. In the realm of city & canyon driving, it’s all but effing meaningless. Yes, a rumble-hogger misses out on the Zen of motorcycle maintenance, but that involves greasy fingers and higher upkeep costs. **

“What matters is the look, the size, the blackness, the vibration, the sound and the speed, along with the tuk-tuk, the mounted case and the John Wayne–Red River saddlebags. And the presence of heavy-traffic driving skills, of course. Splitting lanes, fearless ducking and weaving, etc.”

Another nitpicker called “The Sandwich” chimed in: “It’s a scooter, not a ‘rumble hog’. Quit railing at the correct nomenclature, dude — it’s sad.”

HE: “Nomenclature, shmolenclature. My trusty steed is what I SAY it is. It is what it looks, feels, rides and sounds like. Buh-RUHM, RUHM, RUHM!! Your nitpicky ninny-nanny objection is less than zero. You and ‘Bruce Taking A Nap’ need to visit Paris some day. Battalions of rumble hogs and nobody gives a damn about your bullshit, nickle-and-dime, left-foot gear-shift hang up.”

** I have a years-long relationship with a brilliant mechanic, Alex of Long Beach, who visits from time to time. 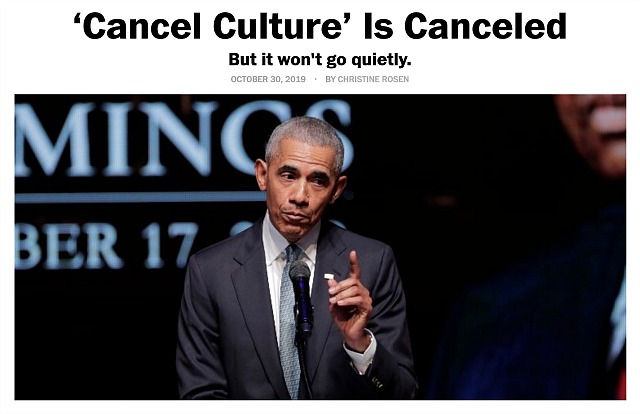