As I understand this latest development, Donald Trump and his attorneys have decided to stonewall any and all attempts from House Democrats to obtain pertinent testimony or documents in their ongoing impeachment inquiry. Basically a blanket “eff you” posture. This in itself would and should add another article of impeachment along with the “get the Bidens” Ukraine whistleblower thing.

The bottom line (and please inform if I’m missing something) is that Adam Schiff and other pro-impeachment House Democrats don’t have the power or the cojones to force Trump to do anything. They’ll strongly protest, of course, and will eventually vote for impeachment, but we all know the drill about the Republican-dominated Senate being all but certain to vote it down. 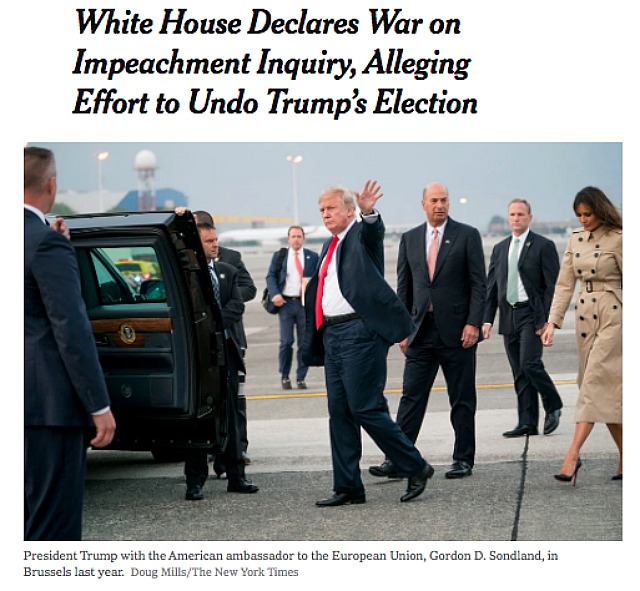 Excerpt: “Trump administration lawyers and aides have spent days puzzling over how to respond to the impeachment inquiry, and [now this] abrupt move suggests that the president’s team has calculated that he is better off risking the House’s ire — and even an impeachment article focused on the obstruction — than setting a precedent for cooperation with an investigation they have strenuously argued is illegitimate.

“The strategy, if it holds, carries substantial risk to the White House. Privately, some Republicans had urged the White House to allow witnesses…to appear, in order to deflate Democratic accusations of a cover-up and offer a public rationale for the president’s actions toward Ukraine. Now, some Republicans worry, Democrats have more fodder to argue publicly that Mr. Trump has something to hide.”