Catholicism and the Pope are concepts that millions still cling to worldwide. Because they offer a feeling of steadiness and security in a tumbling, tumultuous world. Included among the faithful, one presumes, are thousands of movie-worshipping Catholics, and so Fernando Meirelles and Anthony McCarten‘s The Two Popes (Netflix, 11.27) is, not surprisingly, faring well as a potential Best Picture nominee. The fact that it won the Audience Award at the 2019 Middleburg Film Festival is an indication of this.

I saw The Two Popes for the second time last night, and I felt slightly more charmed and moved than I did during my initial viewing in Telluride.

I have nothing but respect and admiration for the film, and particularly for McCarten’s script (which is based on McCarten’s 2017 play, The Pope). In my humble opinion McCarten should definitely be nominated for Best Adapted Screenplay. And it seems increasingly likely that Jonathan Pryce‘s performance as the future Pope Francis (aka Cardinal Jorge Mario Bergoglio) will be Best Actor-nominated as well.

But honestly? I still feel emotionally removed from The Two Popes (as I wrote in my 9.1.19 Telluride review). Because I don’t feel any sort of kinship, much less a profound one, with the Catholic Church. I never have and I never will. 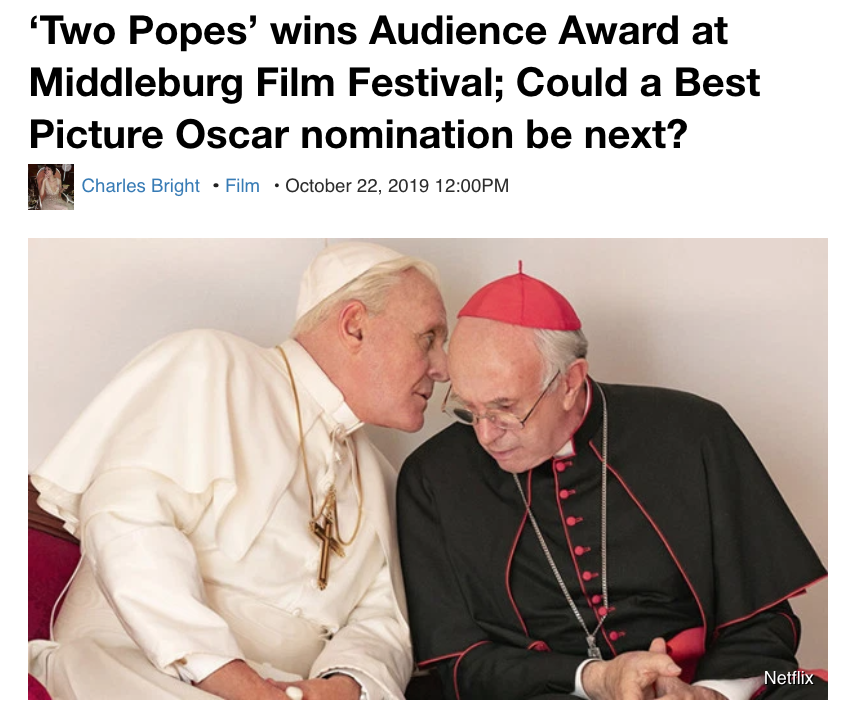 I don’t believe in the Bible…not really. I certainly don’t believe in celibacy for priests, and I despise the thousands of priests who’ve molested children worldwide and the countless bishops and cardinals who’ve protected them from the consequences. I believe that women should definitely be admitted into the priesthood. And while I understand and respect the fact that millions believe in the Catholic mission and its hierarchy, I myself don’t. Catholicism is more against things than for them.