45 Comments
I Give Up

The video editing skills of Indiewire‘s David Ehrlich are far more impressive than his film reviews. To me, at least. He really understands how to generate joy, intrigue, excitement, mystery, etc.

HE’s ten best of ’19 (in this order): The Irishman, Les Miserables, Joker, Queen & Slim, 1917, The Lighthouse, Diane, Once Upon A Time in Hollywood, Rolling Thunder Revue: A Bob Dylan Story, David Crosby: Remember My Name.

With her husband and child in tow, a resentful screenwriting daughter (Juliette Binoche) pays a visit to her mother (Catherine Deneuve), an arrogant, legendary, self-centered actress with the usual egocentric problems and tendencies, etc.

“No matter how strong the performances or how assured the direction may be, The Truth can’t shake how, on a writing level, Kore-eda is out of his element. With so many characters finding themselves questioning their own memories and versions of the past, it’s only natural to start asking questions ourselves.

“But if Kore-eda wants to dictate those questions rather than let viewers ask them on their own, that leaves a lot to be desired. According to Kore-eda, the truth is whatever he tells us it is.” — filed on 9.6.19 by The Film Stage‘s C.J. Prince.

In short, what is anyone’s memory but a highly selective accounting of what may or may not have happened?

The Truth opened yesterday in France.

36 or 37 years ago Roadshow, a Martin Ritt film about a modern-day cattle drive, was a go project under MGM. The contracted costars were Jack Nicholson, Timothy Hutton and Mary Steenburgen. Then Ritt had to back out (possibly over creative differences with MGM, possibly due to health problems) and director Richard Brooks was allegedly hired to take over. Then Brooks suffered a heart attack, and the Roadshow plug was pulled.

Six years later, or on 2.26.89, an L.A. Times story reported that Hutton had won a $9.75 million award against MGM after a Los Angeles Superior Court Jury found that the studio engaged in fraud and breached its contract when it canceled Roadshow.

“Hutton had argued that MGM executives deceived him by telling him the picture was being terminated because the director, Richard Brooks, had suffered a heart attack,” the story reads. “The actor contended that the studio, which had recently undergone a change of management, had lost interest in the film and that Brooks had never agreed to direct it.

“Hutton also maintained that the studio made its decision to drop Roadshow in the spring of 1983 but did not tell him until several months later, thereby depriving him of other possible roles.

“Among those testifying during the months-long trial were Brooks, Ritt, Nicholson, Steenburgen and agent Sue Mengers.”

Why am I mentioning this? Because I’ve always wanted to read a draft of Roadshow. I loved the idea of redoing Red River with a story of an ’80s cattle drive, but I never even read a synopsis…nothing. If anyone could send along a PDF or even a brief story summary, please do.

I was initially intrigued by Lucy Ellman‘s “Patriarchy Is Just a Spell,” a 12.26 N.Y. Times piece about Alfred Hitchcock‘s Spellbound. But the subhead — “I’m outing Alfred Hitchcock’s 1945 thriller Spellbound as a #MeToo film” — doesn’t really manifest.

Ellmann basically notes how the male characters in Spellbound treat Ingrid Bergman‘s character, Dr. Constance Petersen, like a sex object or otherwise disregard her authority as a psychoanalyst. Over and over and over, Gregory Peck included. That doesn’t make Spellbound a #MeToo film. It makes it a study of upscale 1945 culture and how almost all males from that realm were sexist assholes in one way or another, certainly by the standards of 2019.

Spellbound is, was and always will be a less-than-satisfying film. The psychological jargon has always felt gimmicky and simplistic, and Peck’s character, John Ballantyne, is, in fact, a brooding, hair-trigger jerk.

But the film has always held my attention for (a) the falling-in-love, opening-of-doors sequence when Bergman realizes she’s head over heels for Peck and vice versa, and (b) the fact that Bergman and Peck did in fact lock loins during production. Both were 29 at the time.

Peck to People‘s Brad Darrach in a 1987 interview: “All I can say is that I had a real love for her (Bergman), and I think that’s where I ought to stop. I was young. She was young. We were involved for weeks in close and intense work.”

Ellman #1: “Psychoanalysis has often despaired of women. Detailing the faults of mothers has worn out the velvet of many an analytic couch. Freud expressed mystification and exasperation with the uncharitable question ‘What do women want?’

“Well, maybe what women want is to steal the show, regain center stage, which is in fact their rightful place in the world — and in the movies. Echoes of the matriarchal cultures that dominated prehistory lurk in our collective unconscious. Female supremacy is alluring.”

I too find female supremacy alluring. This is probably the way to go, given the toxic tendencies of too many boomer, GenX and Millennial males. Things have to change.

But when I think of what’s happened to the Sundance Film Festival over the last five years **, it does give me pause. Think about that and all of the Robespierre beheadings cancellings.

Tatyana and I are staying at a friend’s place in the South Beach section of San Francisco, about three blocks NW of Oracle Park. It’s a magnificent two-story condo with all the amenities (including excellent wifi). We couldn’t be more grateful for the hospitality.

There’s just one problem, and that’s the fact that the place has no heat to speak of, and in fact feels like the David Lean ice house in Dr. Zhivago. I’m trying to remedy the situation as we speak, but for now the only thing I can do is boil water in the kitchen, which helps a little bit.

It’s not like it’s cold outside — 48 degrees is T-shirt weather for New Yorkers. But the holiday atmosphere in San Francisco is damp and windy and bone-chilling all the same. A half-hour ago I went across the street for a cappuccino, and I instantly felt the horror of the howling ice winds off the bay. If I wasn’t properly dressed I’d be dead in less than an hour. 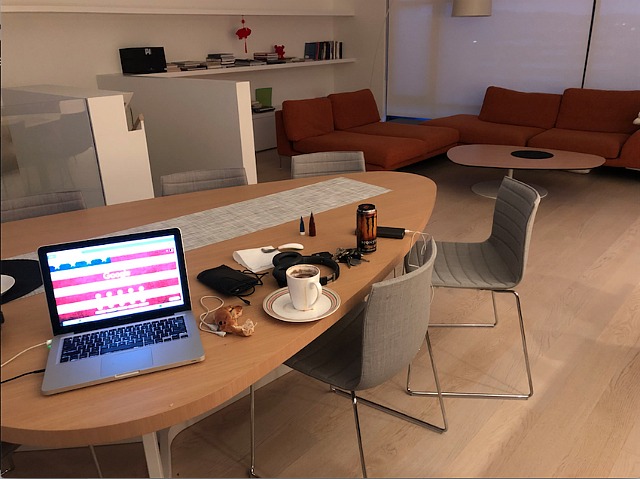 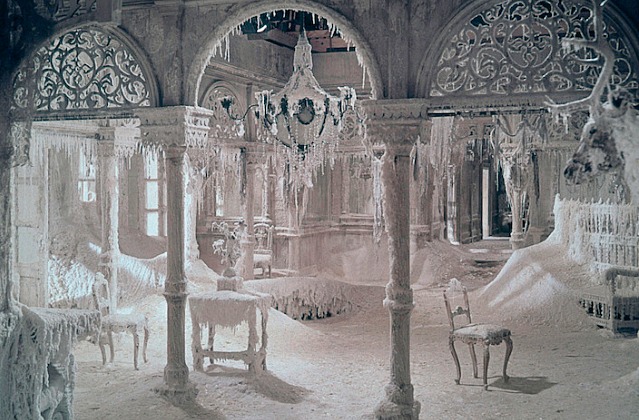 We’re driving north on the 101 (and soon the coast highway) on a casual, take-our-time trip to San Francisco. I’m riding shotgun as we speak, but the wheel will be mine before long.

Posted two months ago: Here’s the original Ed Bradley 60 Minutes report (aired on 11.22.92) about the rash and wrongful imprisonment of Walter McMillian on a murder charge.

Lasting 14 minutes, it covers most of the same material that you’ll find dramatized in Just Mercy (Warner Bros., 12.25). One of the things that Bradley’s report mentioned but that Daniel Destin Cretton’s film doesn’t explore much is the fact that McMillian had been having an affair with a white woman, Karen Kelly, and that one of his sons had married a white woman.

Both McMillian and the attorney he had in 1987, J.L. Chestnut, “contended that Mr. McMillian’s relationships alone had made him a suspect.” In a N.Y. Times prison interview in 1993, McMillian said, “The only reason I’m here is because I had been messing around with a white lady and my son married a white lady.”

The McMillian-Kelly relationship was reported and discussed in Bryan Stevenson‘s “Just Mercy: A Story of Justice and Redemption,” the 2015 book that the film is based upon. Why does Just Mercy mostly ignore the McMillian-Kelly backstory? Mainly, I’m guessing, because McMillan’s sexual history would have compromised the pure-of-heart aura that Cretton and co-screenwriter Andrew Lanham wanted to project. It might have also lessened the sympathy factor among POCs…who knows?

The nighttime scenes in Greta Gerwig’s Little Women deliver the usual, approvable candle-light amber. As they should. That 19th Century timestamp. But Steven Spielberg’s Lincoln, set during the same Civil War era as Louisa May Alcott’s novel, happens in Janusz Kaminskiland — a candle or two, a few gas lamps and a whole lot of milky-gray Kaminski “sunlight” piercing through the windows. It’s the early 1860s as imagined by a headstrong alien.

IMHO the ugliest Robertson Blvd. Christmas decorations ever displayed — red, green, blue and white bulbs wrapped around tree trunks with tinsel-like strips of the same colors hanging from the branches. In London, which arguably knows more about the spirit of Christmas than the government of Beverly Hills, only white mini-bulbs and imitation candle lights are used. Kardashian-style decorations and the legends of Ebenezer Scrooge and Bob Cratchit don’t go together, you see.

Look at these humanoids, these Millennial and GenZ fashion plates in their jeans, T-shirts and whitesides, hopping up and down with anticipation of winning a free getaway in Ojai or whatever. I’d forgotten that Drew Carey has been hosting this show for 12 years now…Jesus. Salivating materialistic frenzy by way of a mosh pit. The American dream, the culture we live in, etc. What would Mark Twain, Sinclair Lewis or Abbie Hoffman say?