Two days ago I said I wouldn’t be surprised if BLM demonstrators try to topple or deface the John Wayne-on-horseback statue at the SE corner of Wilshire and La Cienega. 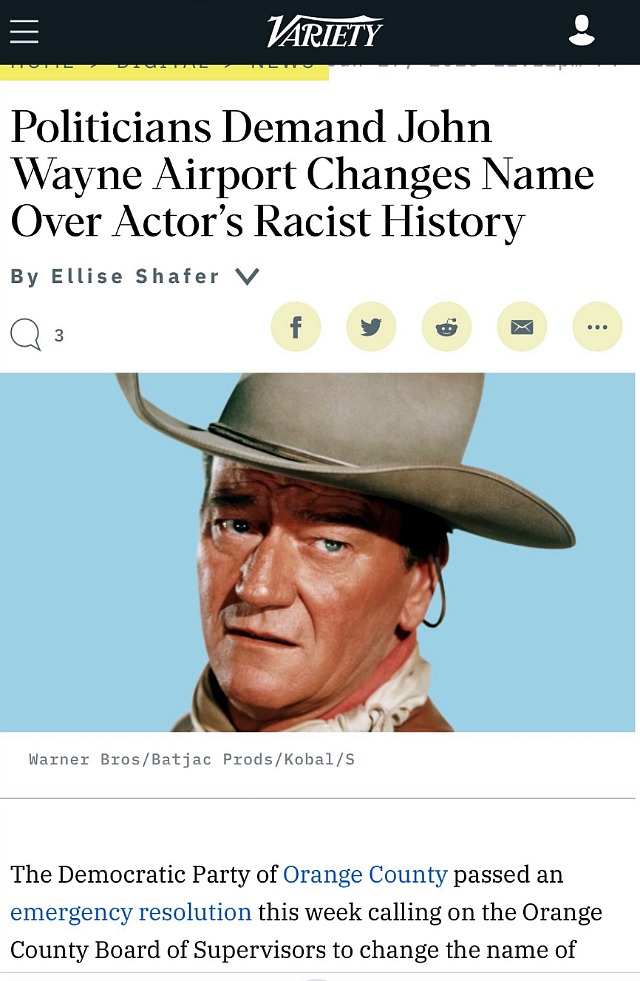 Steven Spielberg‘s Jaws opened almost exactly 45 years ago — 6.20.75. The trouble-plagued Universal release opened in 474 theatres that day, and then expanded to 675 theatres on 7.25.75 — the biggest mass release of a film ever seen at the time. It earned a staggering $7 million the first weekend, and stayed at the top for the next five weeks, ultimately becoming the first pic to top $100 million domestic.

I’ve acknowledged that for what it is, Jaws holds up fairly well. But it’s difficult to think of it these days as just a film. For years it’s been regarded (and not just by people like myself) as almost a sentinel of tragedy, as extreme as that may sound. It ushered in the era of the mass-market, four-quadrant tentpole movie, and in so doing almost single-handedly (i.e., along with the success of Star Wars two years later) turned the film industry away from the idea of smallish or mid-sized movies with flavor and personality being a legitimate thing to invest in.

Jaws and Star Wars, in short, brought high-concept greed into the mix, and from this the interest of corporations in the potential for even greater profits if movies could be sufficiently simplified and tailored to a younger (or more simple-minded) audience. This in turn set in motion forces that wound up dumbing down movies and injecting a kind of virus into the Hollywood system that basically poisoned the whole game, leading to the ascension of tentpole auteurs and dumber plots and faster and faster cutting and hundreds of orange fireballs in action sequences.

This cause-and-effect has been recounted and lamented by many thoughtful chroniclers, and doesn’t need to repeated once again. But Jaws did do it — it let slip the dogs of tentpole hell, and movies have never been the same since.

From the director of The Help, Get On Up and Girl On The Train. Sorry but I’m sensing a downward trajectory here. Good cast though — Jessica Chastain, John Malkovich, Common, Geena Davis, Colin Farrell, Ioan Gruffudd, Joan Chen. Nope, no way, not a chance.

But (and I realize this will sound like an appalling opinion to some) rock music of the ’60s and ’70s encompassed richer, greater realms than were dreamt of by Creem philosophers. I dearly loved Phillip Seymour Hoffman‘s Almost Famous portrayal of legendary Creem critic Lester Bangs, but Bangs was more of a bully instructor than a critic who channelled, felt and explored. I respected Creem and its writers, but I never bought a single issue. Not out of antagonism or disdain — I just didn’t care enough.

From 3.10.29 Glide review by James Roberts: “In a way, the story of Creem is the story of late 20th century America. The magazine was as much a response to the culture as it was an impetus of culture. While the interviews tell the tale of wild debauchery and astounding feats of journalistic courage, they also hold up a mirror on the state of the culture at the time.

“It’s impossible to think of a single publication doing as much as Creem did for a particular scene in today’s culture. Today, even thumbing your nose feels like a marketing decision. Today, we build brands and conventions. It’s hard to imagine a publication where rock stars like Alice Cooper or Iggy Pop would go just to hang out. It’s hard to imagine a publication that would, in 40 years, inspire the likes of Kirk Hammett, Chad Smith, Keith Morris, Joan Jett and Michael Stipe to talk about it in a movie.”

Anyone who can shout this loudly almost certainly doesn’t have a “breathing problem.” No, there isn’t any way to reach “these people.”

This is a Trader Joe’s today. In Los Angeles. Cases are through the roof in California. Is there any way to reach these people?