30 Comments
Once Upon A Time…

…and I mean the ’90s or even the aughts, an off-center biopic subject like Phyllis Schlafly might have warranted a medium- to lower-budget theatrical feature.

The last film along these lines, or one that focused on a famous influential conversative woman of the 20th Century, was The Iron Lady. It starred Meryl Streep, grossed $115 million worldwide and opened on 12.26.11.

Now comes Mrs. America, a six-part FX/Hulu miniseries with Cate Blanchett starring as Schlafly. In today’s realm a two-hour version wouldn’t have a prayer as a theatrical release. Not a fucking prayer.

It begins airing or streaming on 4.15.20. The first two episodes were directed by Anna Boden and Ryan Fleck.

60 years after hitting his career peak as “Kookie,” the car-park attendant on 77 Sunset Strip, Edd Byrnes is gone. Hugs and condolences to the crew. Byrnes was 87 years old, if that doesn’t freak you out too much. Death came a callin’ in his Santa Monica home, and that was all she wrote.

Byrnes had a distinctive supporting role in Grease (’78), playing an amiable Dick Clark-like host of National Bandstand. I spoke to him a bit during the New York Grease press junket. For what it’s worth he seemed like a nice guy with a sharp mind.

Wiki excerpt: “As a tribute to his enduring celebrity and his iconic ‘Kookie’ character, Byrnes has ranked #5 in TV Guide‘s list of ‘TV’s 25 Greatest Teen Idols’. In 1996 Byrnes wrote an autobiography titled “Kookie No More.”

“Glorified in song and fable…you’ll meet the highbrow and the hipster, the starlet and the phony tipster…you’ll find most every kind of gal and guy, including a private eye.”

There will be a hue and cry if the Oscar telecast producers don’t include Byrnes in the death reel. Presumably it won’t be an issue.

Sorry for posting this two days late. World of Reel‘s Jordan Ruimy insists that the leading Best Picture Oscar candidates are 1917, Parasite or Once Upon A Time in America. Ruimy is declaring that The Irishman “is finished…it’s not gonna win.” This presumption, which I’ve read elsewhere, is totally freaking me out.

Ruimy’s three reasons: (a) Netflix bias, (b) Three and a half hours, attention spans have changed, etc. (c) A lot of people are calling it slow — it doesn’t play like The Wolf of Wall Street or Casino.

Plus: People are watching The Irishman in two, three, four sittings. It really kicks into gear with the “it’s summer” scene. What do you say to someone who doesn’t get what The Irishman is? This is insane. What’s gonna win then? “1917 and Parasite are #1 and #2,” Ruimy says. “And Once is in third place.” 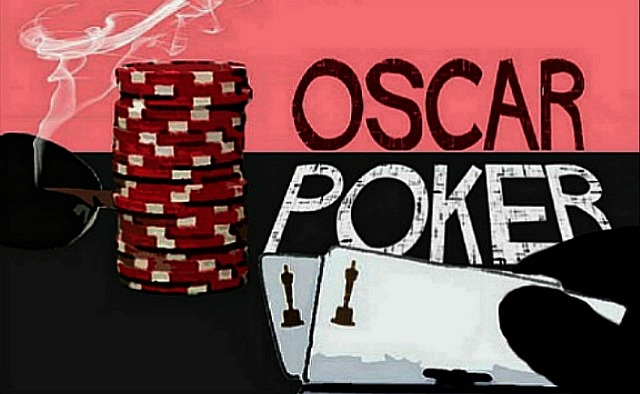 29 Comments
A Chance to Fix “Parasite”!

THR‘s Borys Kit and Lesley Goldberg are reporting that Parasite director-writer Bong Joon-ho and director Adam McKay (Vice, The Big Short) will pool forces on some kind of American remake of Parasite for HBO. Not as a feature, mind, but a six-episode limited series.

It’s not actually clear if the project will be a remake or a sequel of some kind, but I’m presuming the former. The target audience would be the millions of slowboats who’ve refused to see Parasite because they’re irked by subtitles. 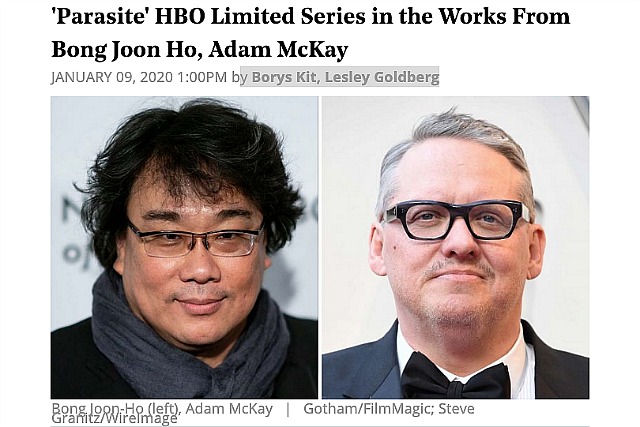 HE to McKay: This is a golden opportunity fix the absurd plotting in the second half of Bong’s original version of Parasite. Instead of having the drunken mother stupidly open the front door to the former maid while she, her husband and two children are completely drunk and vulnerable, rewrite it so the former maid lets herself in because she has an extra key that she’d never returned. She rings the bell and gets no response (because the drunken family is hoping she’ll go away), so she digs through her bag, finds an extra key and lets herself in…bingo! Same basic story, but this time it won’t irritate story-logic guys like myself.

McKay, Bong and HBO will presumably call the limited series American Parasite. I suggest they use San Francisco as the new locale. Just as hilly as Seoul, etc. Have the poor family live in…I don’t know, Daly City or somewhere. Or maybe the Tenderloin district.

I was about to cast my Best Actress vote for Judy‘s Renee Zellweger (along with everyone else), but out of the blue I suddenly decided to vote for The Farewell‘s Awkwafina.

I know Renee’s going to win — this is not about that. I didn’t care for Awkwafina blatantly telegraphing to everyone in the Chinese home that she was gloomy about her grandmother’s impending demise (a feeling she’d been asked to hide), but otherwise I feel a fair amount of soul from her performance. Voting for Julia Butters was a no-brainer. Irishman all the way. 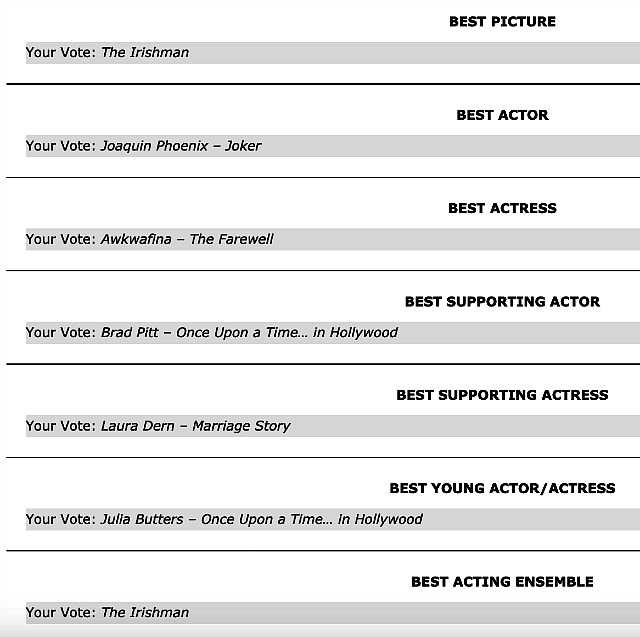 Two final thoughts (for now) about the late Buck Henry, Catch-22 and The Graduate:

From Joe Leydon, sometime this morning: “Something else about The Graduate and not unlike The Sterile Cuckoo, which followed two years later. It appears timeless because it’s not at all reflective of its time. You’d never know from looking at these films (both of which I love, and both of which I saw back in the day) that the Vietnam War was going on.”

HE response: “The Graduate actually was reflective of its time as far as your vaguely stifling upper-middle-class norms were concerned. Anti-Vietnam War and anti-Dow Chemical napalm fervor (‘Dow shall not kill’) was hot on university campuses but in your cushy suburbs this political current only caught on in the aftermath of all the ’68 convulsions (MLK and RFK killings, LBJ folding his tent, Chicago Democratic Convention riots) and beyond. In ‘67 the middle-class miasma was mainly about dreaming about the Beatles and getting high and zoning out…an odd blend of vague resignation and regimentation and cruising around for nocturnal adventure. Whiffs of sexual secretions (as well as ‘blue balls’) and Brooks Brothers shirts that smelled like pot and the sounds of Buffalo Springfield and Sgt. Pepper.

28 Comments
Tell Me You’re Not Intrigued

Again, the colorizing isn’t good enough, but conceptually the idea of watching silent classics via decent digitalized color would be genuinely exciting. For me anyway. Where would be the harm if Orphans of the Storm, Son of the Shiek, Intolerance, Sunrise or Way Down East were to be colorized? The earliest color films look like hell anyway, and no one’s ever going to fiddle with the original monochrome versions so what’s the problem? Until this morning I’d never watched a fake-color, live-motion rendering of the young Buster Keaton. One problem: Shiny blue-purple car at 5:06 mark.

The doomed passengers on Ukraine International Airlines Flight 752 — 176 in all — were mistakenly murdered, it turns out. The jet was hit by a Russian-built Tor-M1 (SA-15) surface-to-air missile system operated by the Iranian military. Businessinsider: “Pentagon officials told Newsweek that the incident was probably an accident, as anti-aircraft systems were likely active at the time of the crash early Wednesday.”

Minderbinder: “Nately died a wealthy man, Yossarian. He had over sixty shares in the syndicate.”

Yossarian: “What difference does that make? He’s dead.”

Minderbinder: “Then his family will get it.”

Yossarian: “He didn’t have time to have a family.”

Minderbinder: “Then his parents will get it.”

The legendary Buck Henry has passed at age 89 from a heart attack. From the mid ’60s to mid ’90s Henry was a screenwriting king and highly valued pinch-hitter who specialized in quippy, ascerbic humor, as well as a well-known deadpan comedian who acted in scores of comedies and social satires. 30 years at the top of the heap, and closer to 40 if you count his early TV writing days.

Buck was also very decent and helpful to me during my Entertainment Weekly and L.A. Times Syndicate column-writing days (’91 to ’98) as he would always pick up the phone and help if he could. He could be testy and crabby from time to time, but that came with the territory. Generally an excellent human being.

And in between these two he adapted a talking-dolphin movie that wanted to be one of the most emotionally devastating films of its type ever made. It didn’t get there but the effort was vigorous.

The first two films in question are The Graduate, directed by Mike Nichols, and Heaven Can Wait, which Buck co-directed with Warren Beatty. These alone put Henry in the 20th Century pantheon of legendary screenwriters and co-directors.

He also co-created the original Get Smart NBC series with Mel Brooks. He also wrote or co-wrote Catch-22 (’70), The Owl and the Pussycat (’70), What’s Up, Doc? (1972) (with Peter Bogdanovich, Robert Benton and David Newman), First Family, Protocol, To Die For, Town & Country and The Humbling.

He also appeared on several Saturday Night Live episodes in the ’70s and ’80s. He also played supporting or bit parts in The Graduate (the hotel desk clerk…classic!), Catch-22 (Lieutenant Colonel Korn), Taking Off, The Man Who Fell to Earth (Oliver Farnsworth who was thrown out of skyscraper window), Heaven Can Wait (the heavenly escort), First Family, Eating Raoul, Defending Your Life, The Player, Short Cuts, To Die For and Town & Country.

From Variety‘s Rick Schultz: “In a 1997 interview with National Public Radio, Henry said he almost dropped the line, thinking it was ‘a sort of ’50s society way of complaining about falseness.’ But it resonated with younger audiences and helped turn the film into a classic.”

Poor Vicky Krieps had her hands full with Reynolds Woodcock (Daniel Day Lewis), a problematic headstrong creative type, in Phantom Thread. And now she’s dealing with another headstrong creative (a screenwriter played by Tim Roth) in Mia Hansen-Love‘s Bergman Island, which will open…uhm, “to be announced.”

Why does their rented house look so utilitarian? Where’s the foundation shrubbery?

Boilerplate: “Bergman Island revolves around an American filmmaking couple who retreat to the island for the summer to each write screenplays for their upcoming films in an act of pilgrimage to the place that inspired Ingmar Bergman. As the summer and their screenplays advance, the lines between reality and fiction start to blur against the backdrop of the island’s wild landscape.”