For the first time since the ’93 Sundance Film Festival, I haven’t gotten a jump on things by arriving early in Park City — Wednesday night, say, or early Thursday afternoon — and filing the usual hot story about the food I’ve bought at Albertson’s and the people I’ve run into in the aisles.
I won’t even be picking up my press pass until late Friday afternoon, which means I’ll be missing the 1:30 pm press screening of The World According to Sesame Street, which I’m hearing is time very well spent. But the value of pre-festival Los Angeles phone-chat info is dropping sharply as we speak so forget it. 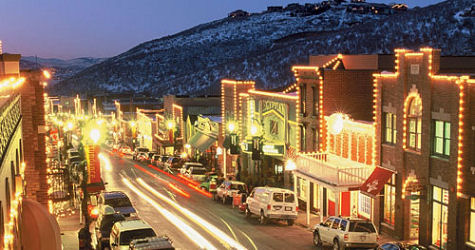 Park City’s Main Street during the waning hours of the ’05 festival, snapped from the roof of the Treasure Mountain Inn.

I can’t wait for the first left-field oddball movie to pop through. By “left field” I mean the sort of life-altering, visions-of-Johanna indie-cred film that very bright critics like Manohla Dargis or David Poland tend to have kittens over, and that not-quite-as- bright people like myself tend to have difficulty with. It’ll happen, trust me.
“There’s nothing like seeing a good film with a totally hip audience at Sundance,” people always say. And yes, the festival is worth it for those wondrous communal highs. But not every movie that slays in Park City does the same in Framingham or Paramus. And it’s not the film’s fault. I don’t want to sound like a snob, but some audiences just aren’t hip or perceptive enough to get it and that’s the truth.
< ?php include ('/home/hollyw9/public_html/wired'); ?>
If a movie is playing at the Eccles, the Raquet Club or the Library over the first three or four days, it’s probably pretty good or at least penetrating or half-clever on some level. And if it’s been scheduled from Tuesday, 1.24, through the end of the festival, be careful. (Except for Alpha Dog — see following story.)
I’m presuming that Stephanie Daley, Hilary Brougher’s drama about a young woman (Amber Tamblyn) who may have killed her child, will be one of the first announced pick-ups, but to judge from the film’s Equus-summoning quote that appears in the program notes — “This case is not about facts…it’s about what we believe” — the hoi polloi appeal may be limited.

I gather (i.e., have been told more than once) that Little Miss Sunshine, a Capra- esque dysfunctional-family heart movie from co-directors Jonathan Dayton and Valerie Faris, will also be one of the early pick-ups. (Smells to me like a Fox Searchlight thing.)
Written by Michael Arndt (who lived in my humble West Hollywood abode last summer while I crashed in his spartan Brooklyn apartment), it stars Toni Collette, Gregg Kinear, Steve Carell, Paul Dano, Alan Arkin, Abigail Breslin. (First screen- ing: Eccles at 6 pm Friday. 2nd screening: Library at 8:30 am, Saturday, 1.21.)
Other likely pick-ups appear to be Julia Goldberger’s The Hawk is Dying with Paul Giamatti and Michelle Williams; The Darwin Awards with Joseph Fiennes and Win- ona Ryder; The Night Listener, a drama with Robin Williams, Toni Collette and Sandra Oh; and The Illusionist with Edward Norton, Paul Giamatti and Jessica Biel.

Wait a minute…The Darwin Awards?
Other intrigues include Michael Gondry’s The Science of Sleep, about a guy (Gael Garcia Bernal) falling for his neighbor; Chris Gorak’s Right at Your Door, a post- 9/11 nightmare piece about a terrorist “dirty bomb” detonating in Los Angeles; and Jason Reitman’s Thank you for Smoking, a comedy about a jaded tobacco lobby- ist (Aaron Eckkhardt) which everyone saw and liked in Toronto four months ago.
Some people are cranked about seeing Terry Zwigoff’s Art School Confidential, which I saw and didn’t think much of…sorry.

The Devil Wears Prada (20th Century Fox, 6.30.06) is a Manhattan fast-lane chick flick about the soul-corrupting rigors of working for an Anna Wintour-like Boss from Hell.
Let’s face it — Meryl Streep is going to wail as Miranda Priestley, editor-in-chief of the Glamour-ish Runway magazine. We all love it when gifted actresses play successful hyper neurotics. Faye Dunaway was never so perfect as she was in Network.
Anne Hathaway (Jake Gyllenhaal’s wife in Brokeback Mountain) plays Andy, the college journalism major hired to be Streep’s junior assistant as the film begins. Stanley Tucci, Rent‘s Tracie Thoms, Simon Baker and Emily Blint costar. 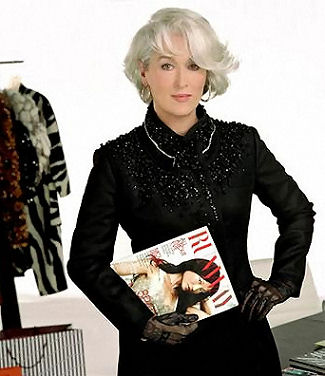 I’ve read the script and enjoyed it for what it is, but I’d like to see a Hollywood confection some day that doesn’t trot out the same old bromide that demanding, high-paying, high-pressure jobs are bad for your relationship with your sweet laid-back boyfriend (played here by Adrian Grenier) and bad for your soul, etc.
Peter Hedges (About a Boy) has top-of-the-page screenplay credit on my draft, which is dared March 14, 2005.
The revisions are by three smarty-pants writers supplying the uptown polish and bitchy banter (Howard Michael Gould, Paul Rudnick and Don Roos).
The most recent polish when this draft was copied was by Aline Brosh McKenna (Laws of Attraction), whom the producers brought in to punch up Hathaway’s part and soften up the emotional tone of the film (i.e., make it more appealing to under-30 women) by heightening the vulnerability stuff. 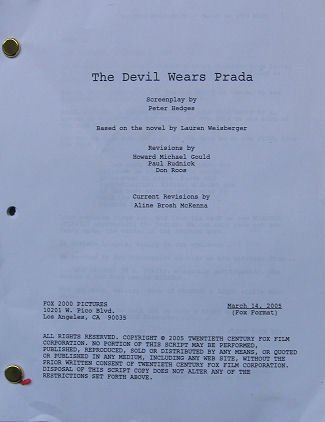 Dog Has Its Day

Of the dozens of definite-interest films playing at the 2006 Sundance Film Festival (which I haven’t even begun to try and summarize), Nick Cassevetes’ Alpha Dog has easily gotten the most press…and yet it’s showing at the very end of the fes- tival (Friday, 1.27 at the Eccles, and Saturday, 1.28, at Prospector Square) when most of the hot-and-happening crowd will be gone.
I have it on very good authority that it’s worth sticking around for. Alpha Dog isn’t a great film but it’s quite provocative and even agitating (in a good way). It’s certainly thought-provoking, and it boasts more than a few live-wire performances, including a serious stand-out one by Justin Timberlake.

Directed and written by Cassevetes, Alpha Dog is more than a cautionary tale about amoral kids gone wild. It’s a condemnation of liberal anything-goes values, of absentee parents, of a society lacking in moral fibre. In short, it’s a film that social conservatives will point to and say, “See? This is what we’re trying to prevent.” And it’ll be hard to argue with them.
The impression is that Dog has fashioned its own particular vibe and attitude, but it will certainly be seen as following in the tradition of Tim Hunter’s River’s Edge, Jack Aaron Estes’ Mean Creek and Larry Clark’s Bully.
The film also stars Shawn Hatosy, Harry Dean Stanton, a bewigged Bruce Willis, Olivia Wilde, Sharon Stone, Dominique Swain and Ben Foster (another provider of an exceptional performance).
Based on a true story that happened about six years ago, Dog is about a 20 year-old known as Jesse James Hollywood (called Johnny Truelove in the movie, and portrayed by Lords of Dogtown‘s Emile Hirsch), a pot dealer from a well-to-do San Fernando Valley suburb who obviously saw himself as a minor-league Tony Montana.
This plus the general lower-end-of-the-gene-pool idiocy that is not unknown to suburban youth culture led to Jimmy making a fatal error: he and some pals kidnapped the 15 year-old younger brother of a guy who owed him $1200 as a way of applying pressure, and when he later realized he and his cronies would be looking at big-time jail terms he told a flunkie to kill the boy (Nicholas Markowitz in actuality– called Zack Mazursky in the film and played by Anton Yelchin) to keep him from testifying. 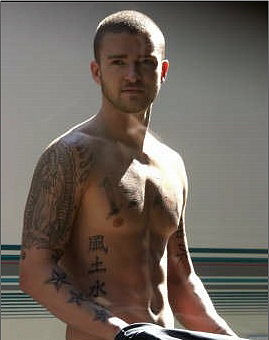 When the boy’s body was found Jimmy eventually left the country and, with his father’s help, wound up living incognito in Brazil. But last March he was punched by Interpol agents and brought back to the U.S. to face murder charges.
The reason Alpha Dog has been getting a lot of press (in a David Halbfinger story that ran today in the New York Times and one that Lou Lumenick ran in the on 1.13) is because Cassavetes and the film’s distributor, New Line Cinema, are caught up in a legal tangle over a threatened injunction that could conceivably prevent Alpha Dog from being released on 2.24.06, as New Line is planning.
The beef is from Hollywood’s attorney James Blatt, who’s saying that prosecuting attorney Rod Zonen was guilty of misconduct by providing inside information about the murder case to Cassevetes during the film’s preparation phase. Blatt’s argu- ment is that the release of this information in a dramatic fashion in Alpha Dog will prejudice matters against his client.
Cassevetes was subpoenaed by Blatt last summer as part of an attempt to have Zonen removed from the case for giving Cassavetes access to nonpublic records. The ploy failed. Two months ago a judge ordered Cassavetes’s researcher, Michael Mehas, who is writing a book about the case, to turn over notes and tapes from his interviews to the defense. Blatt is now threatening to seek an injunction against the release of Alpha Dog.
I suspect Blatt is mainly grandstanding and that Alpha Dog will probably open as planned, but ahead-of-the-curve types will probably want to see it at Sundance just to play it safe. 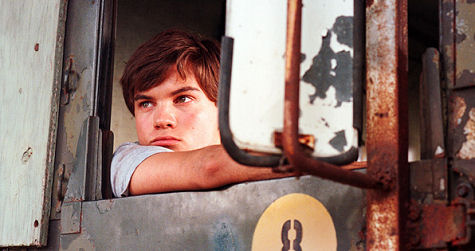 Sundance honcho Geoff Gilmore declares in the program notes that Cassavetes’ film “captures the driving energy and sordid anomie of contemporary youth culture,” adding that it end “in a tragedy that would be shocking if we weren’t so aware of the kind of world we live in, a place with kids who live without mores, parents who don’t have a clue, and ongoing conflict between the lingering inno- cence of youth and moral disintegration and dissolution.”
Being a father of a 17 and a 16 year-old, this Cassevetes quote in the Times piece about absentee-parenting struck home:
“I’m guilty of it — of being too busy with your everyday life to properly spend enough time with your children to figure out what’s going on with them.
“You can check in, and you say, ‘Are you all right?’ But it’s not like being on a farm or spending a lot of time in the house. We all live really global, Internetty lives. Kids have more power than they did before. They have cars, they can get around, they have dough, and there’s always some person that’s got something going on that can get everybody killed.” 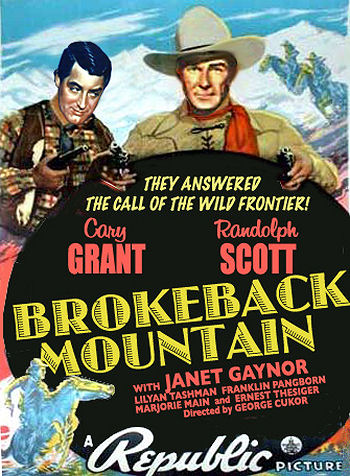 Pete Hammond has sent in some additional views on the Syriana switcheroo: “When I interviewed Gaghan for his WGA nomination screening the weekend before last I asked him if Syriana was basically an original and he admitted that only about a paragraph of the actual book is in the movie, but after spending so much time with Bob Baer in preparing the film he felt the inspiration he got from him is throughout the film. But an adaptation of a book? Never. On the cover of Bob Baer’s “See No Evil,” the book tie-in for Syriana, the copy on the cover says, “The True Story that SUGGESTED the new motion picture Syriana. It shows the Academy writers branch is actually pretty sharp. They just should have told somebody sooner so the situation wasn’t confused. Had Gaghan ever received his ballot (it was lost and just replaced now) he probably would have voted for himself in the adaptation category without knowing it would be a wasted vote.”