I saw Mission: Impossible III (Paramount, 5.3) this morning at screening room #5 at Paramount Studios, and I’m not dissing anyone or anything with the title of this piece. Not even a little bit.
The MacGuffin of J.J. Abrams’ power-packed thriller, after all, is a smallish device called “rabbit’s foot”, and Tom Cruise’s hard-wired performance as IMF agent Ethan Hunt feels, to me, like something new: he’s made himself into the energizer bunny of action heroes. And it works. 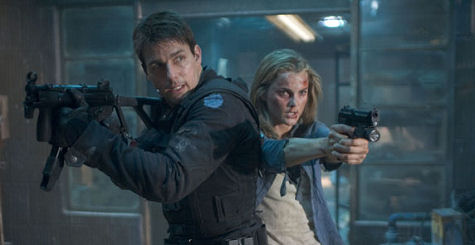 The advance buzz about M:I:3 being awfully damned good has turned out to be true, I’m afraid — as shallow but very expensive action films go, this is about as good as it gets. But I would hold up on the talk about Phillip Seymour Hoffman stealing the picture from Cruise.
Philly is super-cool — cold and snarly with style to burn — but he hasn’t been given enough ammo — not enough scenes or killer lines — to help him stand up against M:I:3‘s 43 year-old star.
< ?php include ('/home/hollyw9/public_html/wired'); ?>
It’s no secret Cruise has been getting (“generating” is closer to the truth) a lot of bad press over the last year or so, with most of it centering on the perception that he’s become overly manic…that his stability is perhaps open to question on some level.
Well, guess what? Cruise answers that perception straight-on in this frenzied summer action film and then rolls right over it like a tank.
He’s made Hunt into a kind of mirror image of hard-core tabloid Tom. It’s like he’s saying, “Okay, fine…you guys think I’ve gone around the bend? All right, then I have! And I’m into it! Being hard-core, I mean.” And this leaves you with a feeling of respect for a guy who may be this or that, but has stood his ground. No backing off! I am what I am! 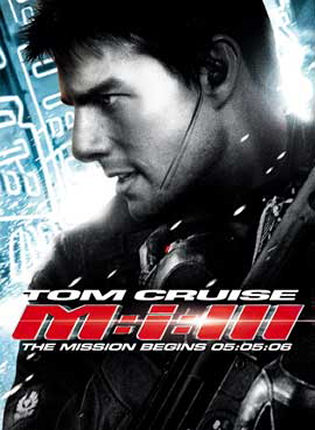 Hunt is a “character,” yes, but based more than ever on the pumping piston rods of Cruise’s personality. A guy who’s all about focus, juice, intensity, endorphins. Sca- ling walls, rapelling down walls. Plotting strategy, eyeballing his costars, running for his life (in more ways than one) and turning tomato red in the face. Neck veins! Neck veins!
And you’re fine with all of this because…I haven’t said this in so many words, have I?…Mission: Impossible III is easily the best of the three M:I‘s. No, I’ll go further: it’s one of the best high-torque summer action films ever.
Brian De Palma’s Mission: Impossible (1996) had two or three brilliantly staged sequences, especially the CIA break-in-and-robbery and the chunnel-train sequence, but some of it was in and out and a lot of people felt confused by the plot.
John Woo’s Mission: Impossible II (2000) was an okay spin on Notorious with Thandie Newton as Ingrid Bergman and Dougray Scott as Claude Rains, and my memories of it aren’t that vivid, so it couldn’t have been that great. 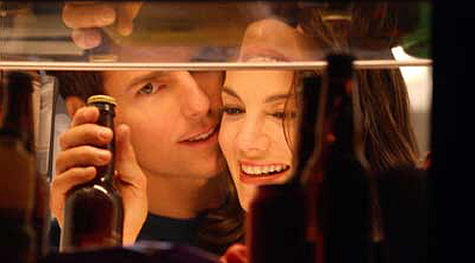 This new one, directed and written by Abrams, is far more relentless and slam- bammy than its predecessors. You’re supposed to give your audience a little downtime between action beats, but this sucker won’t rest. You know the old analogy that action films are like musicals? Mission: Impossible III is almost an opera.
Okay, there’s a mildly relaxing party sequence in the beginning and one or two dialogue-with-Lawrence-Fisburne-as-the-obligatory-company-asshole-riding-the- IMF-team scenes, but that’s pretty much it. The rest is all on the treadmill running at 10.
There are four beautifully composed set pieces — a rescue mission in a factory in a Berlin suburb, a kidnapping in the Vatican, an aerial attack on a causeway over Chesapeake Bay, and a break-in and a rescue in Shanghai. But there are always tangents and side-shows connected to these main events, and something riveting is always going on.
This is the kind of summer “ride” movie that even sourpusses like me can sit back and roll with. Shrewd, inventive and into punching the gas. It’s empty, yes — it’s basically just one technical challenge after another, with arguments and a couple of “I love you”‘s thrown in — but this is one of those films in which depth would get in the way. 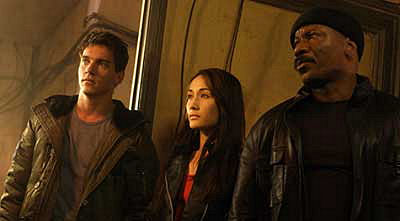 When I hear a film is a “check-your-brain-at-the-door” thing, I know I’m going to hate it. This is not that. It exemplifies what a good geek-level action film should be. Abrams, the director-writer, keeps playing to slightly higher intelligence levels than these films are usually geared to.
Harry Knowles has called M:I:3 “the best damn retooling of True Lies that will ever be done.” Funny, but the only thing I can remember about True Lies is liking Tom Arnold’s dialogue and attitude and Bill Paxton’s character begging for mercy in front of Arnold Schwarzenegger by saying he had a “little dick.”
Hold on…it’s coming back to me. Arnold was a secret operative who hadn’t told Jamie Lee Curtis what he really does, and then a job he’s on turns bad and Jamie Lee gets brought into it and so on. Michelle Monaghan is the Jamie Lee character, I guess, but…you know what? Screw this analogy. I’ve never once seen True Lies on DVD, and for a reason.
M:I:3 is about the IM force trying to shut down a ruthless arms and technology dealer named Owen Davian (Hoffman), who’s about as lethal as they come. The story is basically a tit-for-tat game. I’ll kidnap and try to squeeze you for inform- ation, and then you’ll come after me or my girlfriend and try to squeeze me for information, and we’ll see who’s smarter and craftier. 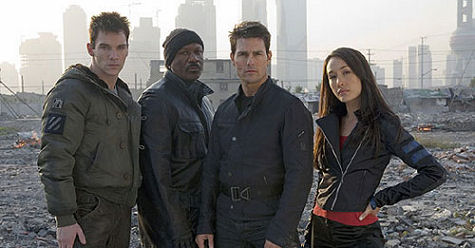 Abrams starts things off an extremely fierce and intense tone. Right away you’re saying to yourself, “This is good…Abrams clearly knows what he’s doing.” As far as hero-being-tortured, tell-me-what-I- need-to-know-or-else scenes go, I would say it’s up to the level of Laurence Olivier pulling Dustin Hoffman’s teeth out in Marathon Man.
Hoffman’s Damian is the torturer, and it’s a little odd that this is his best scene in the film. He’s nearly spellbinding in just about every scene he’s in, but after Capote and all you’re kind of waiting for Philly to really step up with something climactic and classic…and it never comes. He kicks ass with the lines and scenes he’s been given, but somebody wanted this to be Tom Cruise’s film.
The IMFers — Ving Rhames, Jonathan Rhys Meyers, Maggie Q — hold up their end. Billy Crudup is perfunctory as Cruise’s home-office ally. Simon Pegg (last in Shaun of the Dead) has the obligatory computer-geek-who-saves-the-day-with- crucial-key-punching-in-the-last-act role.
Michelle Monaghan has the meatiest female role as Ethan’s initially clueless wife. Keri Russell burns through strongly in the first act. Maggie Q (Around the World in 80 Days, Rush Hour 2) is…well, she’s fine, but the best thing she does is wear a very hot red dress to a black-tie affair at the Vatican. 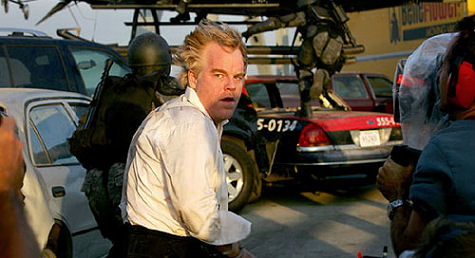 I laughed three times out loud — not at anything “funny” but because I was really enjoying the moxie that went into the writing or acting. I won’t spoil them by sharing.
I had a good enough time with this that I’m going back to see it a second time this evening.
Too many cheerleading pieces and people will start to think I’m a professional kiss-ass, but I have to say it: Tom Cruise’s image problems aren’t going to vanish like that when Mission: Impossible III opens 16 days from now, but they’re probably going to be put on hold.

I finally finished reading I Wake Up Screening: What To Do Once You’ve Made That Movie (Watson-Guptill) last week, and it’s one of the most easily processed, best written, most thoroughly sourced books ever written about how to get your indie movie seen (and maybe even distributed!) once it’s more or less finished.
I’m not going all kiss-ass on this book because I’m friendly with its authors, critic- journo John Anderson and Warner Independent marketing exec Laura Kim, or because I know just about every distribution exec, producer’s rep, indie publicist, film festival director, critic and entertainment journalist they’ve quoted. 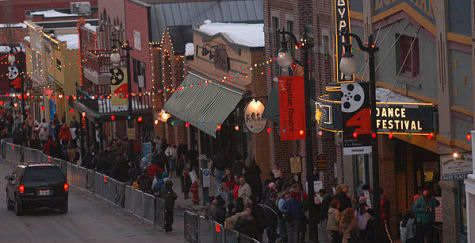 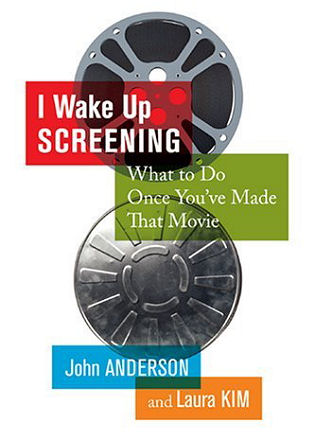 I Wake Up Screening is a how-to manual, but the inside school-of-hard-knocks aroma sets it apart. One or two pages and you’re sold. Trust levels go right up and stay up.
I seriously believe it’s in the realm of choice inside-the-industry books like The Ultimate Film Festival Guide by Chris Gore; The Whole Equation by David Thomson; Easy Riders, Raging Bulls: How the Sex-Drugs-and-Rock ‘N’ Roll Generation Saved Hollywood by Peter Biskind; The New Biographical Dictionary of Film by David Thomson; Final Cut: Art, Money, and Ego in the Making of “Heaven’s Gate” by Steven Bach; The Devil’s Candy: “The Bonfire of the Vanities” Goes to Hollywood by Julie Salamon; The American Cinema: Directors and Directions 1929-1968 by Andrew Sarris; Adventures in the Screen Trade by William Goldman; You’ll Never Eat Lunch in This Town Again by Julia Phillips; and Edward Jay Epstein’s The Big Picture
Every so often I found myself wishing Anderson and Kim had included some ruder, more Peter Biskind-type material (i.e. the kind of quotes and stories that result in certain people refusing to talk to you for four or five years).
And I was a wee bit irritated that they only spoke to (or wrote about) old-media critics and reporters. You’d never know from reading I Wake Up Screening that there are such things as online critics, journalists and buzz-spreaders who wake up and wail every damn day. 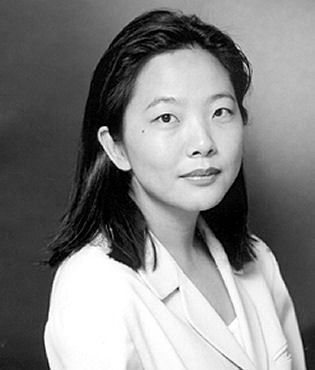 “Think of yourself running in a mile-long race,” Bradford Patrick writes on the book’s Amazon.com page writes. (Sorry, but this guy’s a fairly good writer.) “You kill yourself to finish the mile, and when you can see the tape, you find out you have four more miles to go!
“That’s exactly how the authors frame the problem for a filmmaker. You got the money scraped together, you shot your film, you’ve been in post cutting the film, and then (and perhaps only then) do you become aware of the millions of details, hurdles, and pitfalls that lie between you and bliss — a theatrical release.
“The authors love film, and want nothing more than for your film to find an audience…but how? This is where the step-by-step analysis of dealing with PR, producer-reps, attorneys, media and buyers all get outed in fascinating detail.”
Anderson and I spoke about the book and the business last weekend, and here’s the recording of it. We got going and our chat lasted about 44 minutes.
Anderson is the chief film critic at Newsday, a past member of the selection committee of the New York Film Festival and a two-time past chair of the New York Film Critics Circle, a member of the National Society of Film Critics, and a member of the National Book Critics Circle. 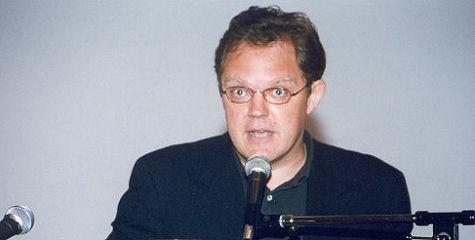 Screening co-author John Anderson, whose eyes rarely glare like they do here

Kim is exec vp of marketing and publicity for Warner Independent Films. Previously the senior vp of mPRm, she’s worked on such films as (I’m taking this right from the book) American Splendor, Dirty Pretty Things, The Pianist and Being John Malkovich.
Buy it or borrow it from a friend…but if you’re even half into the idea of being a serious filmmaker (now, soon, eventually), definitely read I Wake Up Screening.
(Since tapping this out Monday afternoon I’ve learned that “I Wake Up Screening” was also a title of a 1993 book about indie filming, written by director-writer Frank Gilroy.) 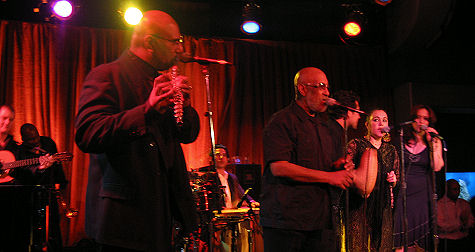 Fantastic jump-up Cuban sounds at Monday night’s after-party following the Hollywood premiere of Magnolia’s The Lost City, a tale of pre-Castro and post-Castro Cuba in the late ’50s and early ’60s, directed by and starring Andy Garcia. 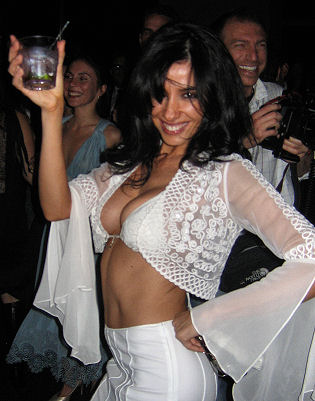 Pretty lady at the party — born in Uruguay, dad was a journalist — who was with Lost City costar Steven Bauer. (I think.) 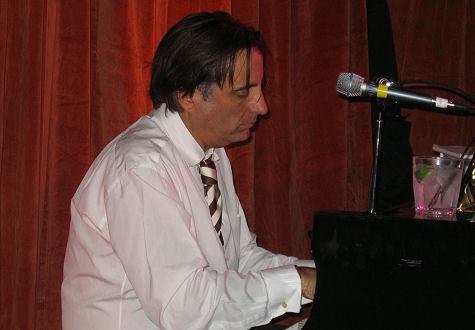 Andy Garcia during the concert portion of the Lost City after-party. 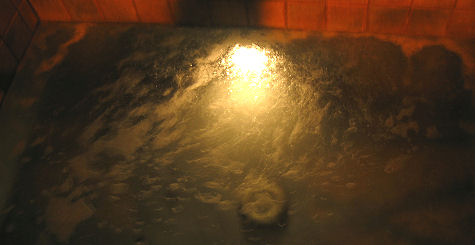 April 19, 2006by Jeffrey Wells1,796 Comments
« Previous post
The official Cannes Film festival
Next post »
On one hand you've got