Enjoyed a nourishing talk Tuesday night at the Babel party with Pan’s Labyrinth director Guillermo del Toro. I’m seeing GDT’s film tomorrow (Thursday afternoon), chatting formally with him on Friday afternoon. Guillermo said he’s honored that a film such as his (i.e., fantasy, wild imagination, special effects ) is playing at Cannes, but he also believes the festival prize winners have pretty much been decided at this point. (Volver, Babel, et. al.) Naturally he’s rooting for Babel, being a close Innaritu friend and ally from way back.

An Inconvenient Truth opens in Los Angeles and New York today. (I think.) Eli Pariser’s www.moveon.org says “how it does on opening weekend will determine how the movie is received in the press and even how many other cities get to see it.” He’s right, and if you want to help pledge to see the film and urge your friends, etc.

Maybe it’s my fault due to an overly complex paragraph, but that Hollywood Wiretap story that quotes my Marie-Antoinette review got it slightly wrong. I didn’t say that “the scene that seemed to most rile the crowd was one ‘in which French agitators shout angry epithets outside the bedroom of the reviled French queen.'” I made an analogy between French malcontents shouting epithets at Kirsten Dunst’s character in the film and the angry booers at this morning’s screening “as Sofia Coppola’s film ended.” 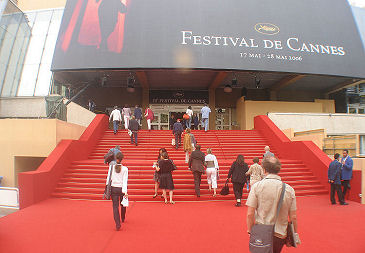 And some others: (a) American traffic cops will ride mountain bikes, but I doubt if they’d ever putter around on cute scooters like these — Tuesday, 5.23, 3:25 pm; (b) Emerging Arists Film Festival honchos Max Ryerson and Thomas Ethan Harris, whose launch party happened a week ago last Tuesday (5.16) in Monte Carlo; (c) The Lying trio on a Big Eagle yacht late Tuesday afternoon: Jena Malone, writer/director M. Blash, Chloe Sevigny — Tuesday, 5.23.06, 5:40 pm; (d) I admit it — I’m vaguely embarassed to be running this photo.

Sony Pictures Classics has partnered up on Persepolis, an in-production animated feature based on Marjane Satrapi ‘s comic-book autobiography (which was written in two parts). SPC announced their distribution deal with the producers at a Tuesday lunch at the Carlton Beach restaurant. 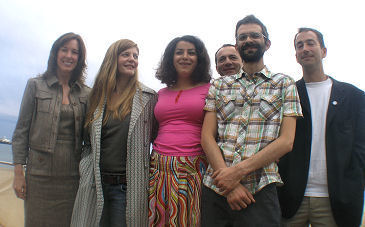 Kathy Kennedy (far left in this group photo and the one above) is the project’s executive producer. Marc-Antoine Robert and Xavier Rigault of 2.4.7 are the hands-on producers. The plan is for the film to be completed by the spring of ’07 and not just be submitted to next year’s Cannes Film Festival but given its debut there. That’s SPC Tom Bernard on the far right; SPC’s Michael Barker is two bodies in from Bernard.

In a reflection of a scene in Marie-Antoinette (Columbia, 10.13) in which French agitators shout angry epithets outside the bedroom of the reviled French queen, loud boos were heard inside the Grand Lumiere theatre this morning as Sofia Coppola‘s film ended. Boos have greeted Cannes screenings before, but not even Richard Kelly‘s heavily trashed Southland Tales got this kind of reception.

Kirsten Dunst in Sofia Coppola’s Marie-Antoinette, which showed this morning at the Cannes Film Festival

I don’t know how to avoid calling this an absolute p.r. disaster for the film, which has the ironical distinction of being almost completely devoid of interest (unless handsome photography, authentic sets, knockout 18th Century garb and a first-rate Rip Torn performance are enough for you) and yet rather well made.
This will certainly rank as a stain upon Coppola’s reputation, as she has arguably made the shallowest and dullest historical biopic of all time.
It seems fair to ask if this movie is on some level a subconscious attempt at self-portraiture. Coppola knows (or should know) about being part of a privleged family and being surrounded by enablers and enjoying the benefits of living in a protective membrane…and here she’s made a movie about a polite, agreeably- mannered bimbo living more or less the same kind of life and never getting a clue about anything outside of her own realm.
Lady Antonia Fraser‘s biography, which Coppola’s film is based upon, argued that there was more to the Austrian princess who became the Queen of France than her reviled reptuation has indicated all these centuries, and that she’s been misunderstood and her mettle undervalued. And yet Coppola’s film says next to nothing about Marie Antoinette’s intestinal fortitude.
This is a profoundly boring film and a politically inert and careless one to boot — quite deliberately, it seems. Director Sofia Coppola and Dunst on set of Marie-Antoinette

Coppola doesn’t even relate the story of Antoinette’s final four years, which is the period in which, after years of profligate indulgence at the expense of the French treasury, the queen was said to have shown real dignity and character as she faced the kiss of steel. The fact that Antoinette was caught up in the French revolution and finally had her head sliced off in 1793 is — hello? — the reason she’s (in)famous, the reason Fraser wrote the book, and the reason people might conceivably want to see Marie-Antoinette …and yet Coppola blows it off.
I didn’t conduct a straw poll, but this morning’s boos probably had a bit to do with this.
And yet, from a perspective or whether or not Coppola has fulfilled her take on the the life of one of the most loathed women in history (i.e., the ultimate example of royalist arrogance), she’s actually done a good job.
The emptiness aside, Marie-Antoinette is a very well-made piece in terms of overall composition, pacing, consistency of tone, acting, production design, etc. There’s an obvious discipline at work here, even if it’s in the service of always keeping everything shallow and insulated, shallow and insulated, shallow and insulated.
The use of ’80s music (Bow Wow Wow, New Order, etc.) is actually one of the better things about it, because at least you have something to groove on when the tracks are playing.
The not-well-made aspects — and these are crucial — are the lack of spiritual resonance, rooting interest and dramatic tension. 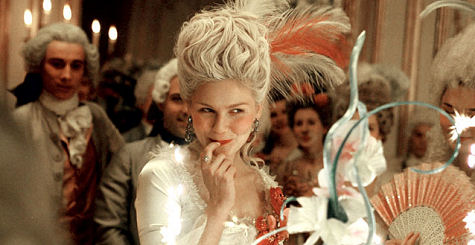 I am paying Coppola respect by saying it appears to have been her vision to make an exquisitely-composed dead movie about a group of priveleged, narcotized, all-but-dead people (i.e., King Louis XVI, Marie Antoinette and all the Counts, Countesses and social-political hangers-on at the Versailles Palace in the 1770s, ’80s and early ’90s) who couldn’t have cared less about life outside their gilded cocoon.
She might even have a subtle social-scolding scheme up her sleeve. “This is how life was for the Versailles royals back then,” her film seems to be saying. “And you know what? These people were just as shallow, spoiled and self-absorbed as many of you are. Consider this and the notion that history repeats itself.”
But the showing of empty lives of leisure without elements of action or dramatic choice has its limits.
There was all kinds of intrigue going on in Antoinette’s life back then (as this Wikipedia history of Antoinette’s life makes clear). Any director with any interest in the twists and turns of her political drama from the time of the storming of the Bastille in 1789 until her death by guillotine in 1793 could have made a very gripping film. And yet almost everything of consequence that happened during this period has been ignored.
There isn’t even a brief mention of “the Affair of the Necklace”, which did more to sully Antoinette’s reputation with the French anti-royalists than anything else. (Charles Shyer devoted almost an entire film to this very episode in 2001, called The Affair of the Necklace.) 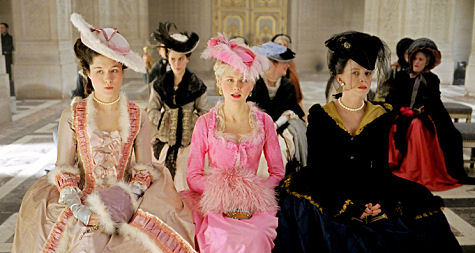 As far as it goes, Kirsten Dunst’s performance as Antoinette feels like it came from some emotional investment and plays, on a certain level, as a half-sympathetic portrait. Jason Schwartzman’s King Louis XVI is a total one-noter, but Coppola hasn’t given him anything to do or say that doesn’t exude the personality of a precocious man-child.
Torn, however, is amusing and spunky as King Louis XV. Snappy perfs are also delivered by Judy Davis, Asia Argento, Steve Coogan (whose characters surround Antoinette at Versailles) and Marianne Faithful (as Antoinette’s mother).
In a way I almost admire the gutsiness of Coppola’s decision to make this into a wafer-thin movie. You might hate Marie-Antoinette , as I did, but at least Coppola developed a thematic approach and then shot it that way and stuck to her guns. She deserves a kind of credit for this.
Cinematical’s James Rocchi just walked by inside the Orange Wi-Fi Cafe and shared a killer line in his review, which he just sent in:
“Marie Antoinette is famous for having said of her subjects, ‘Let them eat cake.’ Sofia Coppola’s view seems to be, ‘Let them eat icing.'” 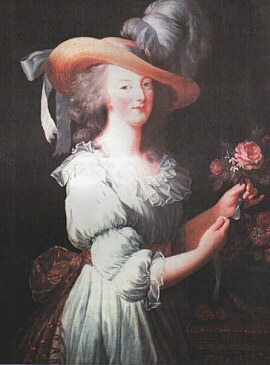 The N.Y. Post‘s “Page Six” column has quoted that downbeat- tracking item I wrote last Saturday about The Breakup, along with a Universal spokesperson saying that “Wells doesn’t understand tracking” [and that] “for a romantic comedy, the numbers are very encouraging.” I quoted NRG figures that put “definite interest” levels at 30, and “first choice” at 5, and concluded, perhaps a bit rashly, that the game is “pretty much over.” The numbers were accurate and I conveyed an interpretation that seemed right to me, but I’m allowing for an error of emphasis on my part because I’ve since been told by others that this conclusion was simplistic and lacked perspective. The numbers I ran only tell part of the story, as they were only a reading of the pulse of the potential audience two and a half weeks away from the opening. The first choice and definite interest figures were misleading, I’ve been told, because biggies like The DaVinci Code and X-Men 3 were ruling at the time the survey was taken, and that scores for The Break-Up and The Omen will markedly improve with tomorrow’s (i.e., Thursday, 5.25) numbers. I’ve since been told, in fact, the The Breakup may pull in a more-than-substantial opening weekend sum. I’m not saying what I said earlier will prove to be incorrect — the Vince Vaughn-Jennifer Aniston comedy was not looking like a strong contender when I ran that item. Aniston’s name-marquee value doesn’t appear to mean much to audiences so far, and NRG respondents have reported a fairly pronounced disinterest in seeing Vaughn inhabit a romantic-boyfriend part. And there’s also that re-shot ending, which advance-screening witnesses have said is a cop-out. But sometimes the wind shifts and sometimes audiences are slow on the pickup, so let’s see what happens.