I’m figuring more like $90-something million for the 4-day X-Men 3 gross…just a hunch.

Got into Paris five hours ago — it’s 1:07 ayem on Saturday — and the wi-fi in the apartment doesn’t work. (Merde.) It can’t work unless you provide a user name and passsword, and of course the guy who’s renting the place to to me didn’t think to provide this info. (And when I called him at his place in Brooklyn to get this vital data he went, “Uhhm…I don’t know it offhand…ask the woman who gave you the key,” etc.) But now that I’ve settled down, I love the dueling impressions on the ’06 Cannes Film Festival by the Hollywood Reporter‘s Anne Thompson and the very sage and industry-savvy David Poland on his “Hot Blog” commentary that ran in response. I’ll jump in myself sometime tomorrow when I stop fuming about the apparently dial-up-speed wi-fi in my grunge-level, pit-of-hell armpit Paris apartment not being accessible.

Uh-oh…wait a minute…Variety‘s Brian Lowry has panned The Breakup…sorry, The Break-Up: “Misleadingly marketed as a boisterous comedy, The Break-Up may be the first ‘last-date movie’ — the one you see with someone that you’re about to dump. Sporadic rays of sunshine emanate from the broad and gifted supporting cast, but the core story is almost relentlessly unpleasant, like sitting through a dinner party where the host couple does nothing but bicker.”

Leaving Cannes late this afternoon on an Easy Jet flight to Paris. I’ll be missing the past-midnight screening of Kevin Smith’s Clerks 2, which happens about nine hours from now, and the Pan’s Labyrinth party being thrown tomorrow evening by Picturehouse. Plus whatver opportunites that may exist for makeup screenings. I’m very, very sorry I never caught Joon-ho Bong’s The Host , a South Korean monster movie that N.Y. Times critic Manohla Dargis went for in a big way. But there’s plenty of stuff to get into in Paris.

Cinematical’s James Rocchi on the Cannes films he’s walked out on. I don’t know if walkouts are worth it over here. If the film is a stinker and you haven’t got anything pressing to get to for an hour or so, just nod out. It’s easy with the 19-hour days and the pounding pace of it all.

The opening-weekend predictions on X-Men 3, dead certain to be the #1 film over the coming Memorial Day weekend, are being modified. I was hearing a week and a half ago that the four-day total could be way way up there. Now Variety is saying that The DaVinci Code “will suck away a chunk of the adult audience and will likely keep X-Men from reaching the boffo $85.6 million bow of X2 three years ago. Fox will be very pleased if it reaches that figure over four days, instead of the three it took X2.”

“To be honest, Paris Hilton is my perfect model. She has charm and is classy. She has everything. We have nothing, really.” — 15 year-old Claudia Sorrentino in Cannes, quoted by Reuters reporter Kerstin Gehmlich in a piece about young girls who stroll the Croisette in hopes of getting noticed by rich or half-connected Eurotrash guys, and perhaps becoming a faux-VIP for an hour or two if she wangles an invite into the right party and chats with a celeb, or at least gets her picture taken.

However much the Breakup tracking upticks, which, as expected, it is now doing, Vince Vaughn‘s staunchly alpha-male rat-a-tat-tat smartass schtick is an absolute must-have…as long as the movie he’s in agrees with and salutes who and what he is. Is that movie The Breakup? An above-average portrait of the 36 year-old comedy star by USA Today ‘s Susan Wloszczyna pretty much lays iton the line as far as Vaughn’s pre-Breakup situation through a quote by Jon Favreau: “This movie will determine how his career goes. He could either be a well-paid hired gun or, if this film is successful, he could be somebody who gets to create his own material and decide who and where and how he is going to work.”

Words about the powerlessness of film critics in this Guardian story that’s mainly about the critic-proof DaVinci Code. 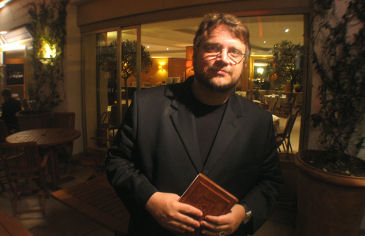 (a) (l. to r.) Lying‘s Jena Malone, director M. Blash, Chloe Sevigny, director Gus Van Sant at a post-screening dinner at Indochine, where the most elegant and gastronomically pleasurable affair of the 2006 Cannes Film Festival was hosted last night — Thursday, 5.25, 10:50 pm; (b) Spread from Pan’s Labyrinth director Guillermo del Toro’s note-and-sketch journal, from which he wrote the screenplay and used to draw the first images of monsters and phantoms from the film — snapped in the Martinez Hotel lobby on Thursday, 5.25, 11:35 pm; (c) Another spread from the del Toro workbook — Thursday, 5.25.06, 11:36 pm; (d) French film scholar and author Michel Ciment and director Sydney Pollack during a “Master Class” interview with Pollack at the Salle Bunuel — Thursday, 5.25.06, 5:15 pm; George Clooney cappucino ad in Wednesday’s print edition of the Herald Tribune;
A marginal lack of press enthusiasm over Al Gore and Davis Guggenheim’s An Inconvenient Truth was indicated, I thought, by three nearly empty rows in the Salle de Presse prior to the Truth press conference earlier this week. Many journalists attended and much coverage resulted, but there were no empty seats during the X-Men 3 press conference.