A DaVinci dispatch from a journalist friend called “Deep Pope,” to wit: “I have a pet theory that The Da Vinci Code may be in some kind of trouble. At the very least, Sony seems to be worried about it. 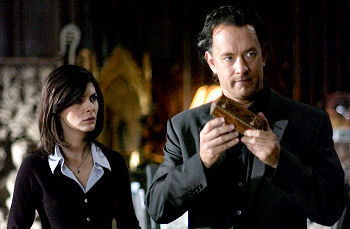 The studio is shopping around an inordinate number of advance interviews for the film, it seems to me. Paul Bettany, Ian McKellen, Alfred Molina and Akiva Goldsman are being offered to journalists for interviews, but the catch is, you can’t see the movie yet. So you have to ask questions based on knowledge of the book and what you’ve see in the trailer. Suggests to me that maybe Sony doesn’t want the movie compared to the book too soon. Plus members of the Hollywood Foreign Press Association are being shown 35 minutes of the film tomorrow (i.e., Monday, 5.8). They’re then getting a sit-down with Tom Hanks — don’t know if it’s a press conference or round table. Is it necessary to stroke the HFPA members outside of Golden Globes season? Why the preferential treatment for this film? Surely no one at Sony thinks there will be any Oscars out of Da Vinci Code? Or are they just trying to goose whatever global press the HFPA can scare up before word gets out on the movie? Does any of this seem normal to you? They didn’t do this for Spider-Man, as I recall.”