An AICN correspondent named “Mutant Camel” claims to have seen Brett Ratner‘s X-Men 3: The Last Stand (20th Century Fox, 5.26), and I don’t know. He doesn’t have that quasi-measured circumspect tone that tells me a writer is coming from at least a somewhat perceptive or trying-to-be- thuggishly-thoughtful place. He sounds too effusive and geeky, like a plant trying to sound like he isn’t one. 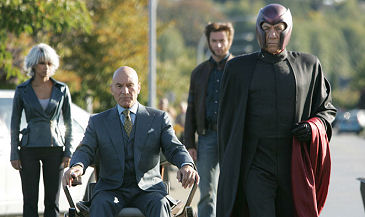 That said, he likes it…and yet one of the things that seems to warm his heart is the intense violence. Terrific. “If the last one was subtitled X:Men: United, the subtitle of this one should be X-Men Kick the Holy Crap Out of Each Other for 2 Hours.”
http://www.aintitcool.com/display.cgi?id=23285