Alejandro Gonzalez Innaritu’s Babel, which press-screened this morning, is, I believe, a lock to win the Palmes D’Or. Everyone seems to be feeling this, spreading it around. If it doesn’t win, fine — it’ll still be an incredibly vivid and brilliant film — but I’ll be greatly surprised.

Babel (Paramount Vantage, 10.6) is an incredibly shrewd work in the sense that it’s shaped in a way that keeps you fully absorbed, and yet gradually awakened to the fact that there’s a greater whole coming together than what is indicated by gathering sum of story and scenes. 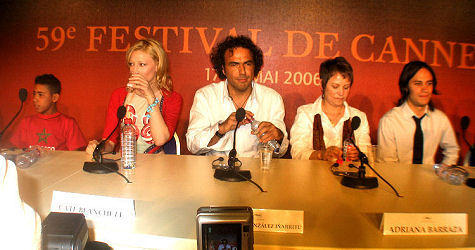 In the most rudimentary sense it’s a film about how one bullet out of a rifle causes damage and hurt to many people in various tangential roundabout ways. But it’s more deeply about how we’re all affected by everything and everyone…how no one is an island, we’re all in this together and everything we say or do echoes all over the place.

It’s about interconnectedness, aloneness, and human frailty, and is especially about parents and children. It radiates compassion and precision and refined artistry with every last frame, shot, edit and line of dialogue.

That last line sounds like breathless film-critic crap, so let’s go over the basics again…

The Tunisian section has two stories — that of a married American tourist couple (Pitt, Blanchett) and their encounter with a bullet, and a story about how that bullet is haphazardly fired from a long distance away by a pair of youths playing with a newly-purchased rifle, and about the consequences of this. 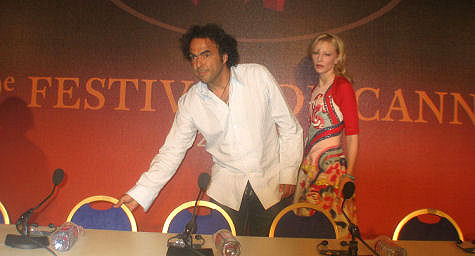 The Mexican section is about this couple’s nanny (Adriana Barraza) and her taking Pitt and Blanchett’s kids (Elle Fanning, Nathan Gamble) across the border into Mexico for a wedding, which leads to bad things all around, particularly for her nephew (Gael Garcia Bernal).

The Japanese portion is about the relationship between a wealthy businessman (Koji Yakusho) and his deaf daughter (Rinko Kikuchi), and the daughter’s encounters with various men, among them a visiting police detective.

They and many other are linked in the same way that the characters in Inarritu’s Amores Perros and 21 Grams are linked — by a single violent act.

This one of those “small” portraits of humanity writ large…and like I mentioned in my Inarritu interview a week and a half ago, it becomes larger and richer and more poignant the more you think about it. 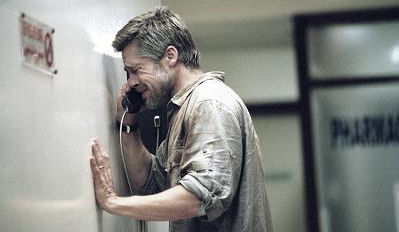 Some journalists in the post-screening press conference were asking Innaritu, “So…what’s it all about, really?” That plus the hearty applause and whoo-whoos from the press at the end of the screening tells me it’s one of those film that resonates in a way that’s fuller and deeper than any concisely worded “meaning” or “explanation.”

Innaritu answered by saying the film “has no lesson — I don’t do films to give lessons. It is a film about human beings…not Moroccans, not Mexicans, not Japanese, not Americans. It’s not about what separates us, but what binds us.”

The teeming energy before the packed press conference began, and the respectful applause given to each player when they were announced at the press conference got underway…you can just feel that this film has connected in a big way.

“The connections between the characters [in Babel] are not about coincidence,” Innaritu went on. “What makes us happy varies with each culture, with each person, but what makes us sad and miserable is something that everyone knows and shares.

“I can say the film is about incommunication, misunderstanding and loneliness,” Inarritu said in an interview we did on 5.5, or about eighteen days ago.

“Babel was an idea I had when I first arrived in the United States,” he recalled. “This film would have been impossible without me being a director in exile, I would say. Because what comes from this is that you have a consciousness…a very strange perspective of your country and of yourself.

“I’m speaking of a complex relationship between a citizen of a Third World country” — Inarritu was born, raised and launched his career in Mexico — “and this country, and the traveling that I have done in the last six years, the way you understand things. So I guess that was what [led] to the necessity of making this film.

“So I started working on this thing with Carlos Cuaron [the brother of Alfonso Cuaron and screenwriter of Y Tu Mama Tambien]. In the beginning. He would be the writer. But we began it as an argument and never took it beyond that, so we decided that he would do another project that we were developing. 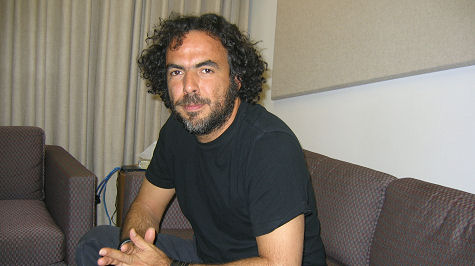 “At this point I invited Guillermo to participate in this story, and we obviously…as part of that process, we decided to share a lot of things.”

“I think Babel is different from Amores perros and 21 Grams because the range of this film is completely different, style-wise, than the other ones. Because every story has a particular narrative and personality, and I feel that this is a more cinematic piece.

“I tried to combine the realistic aesthetic that normally I have been working in, but qualitating from an imaginary world where the music and the sound is a guiding force. There are a lot of sound elements in Babel. I was really taking the audio seriously. Using it to try and be inside a character.

“I stripped down so many things in the script by myself, and I was constantly adjusting and adapting and rewriting a lot of things based upon the culture and the situation I was in. It was a very difficult and informative process.

“I feel it is a very different film from the other ones in tone and style. It’s more cinematic. I can only put only one line in the script, but in the shooting I can make a ten-minute piece out of a whole interior consciousness [trip] by one of the characters. 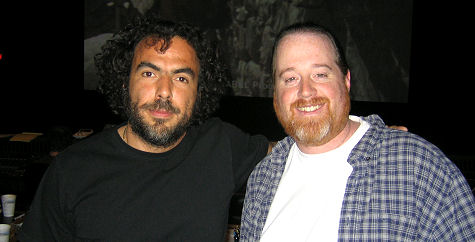