Richard Kelly’s Southland Tales, which had its first public screening this morning inside the Cannes Grand Palais, is a very long throw of a surreal wackazoid football — a stab at a great, sprawling GenX apocalyptic nightmare about an Orwellian police state running things a couple of years from now.
I liked portions of Kelly’s film here and there (especially the musical numbers and the wild fantasy stuff that kicks in toward the end), but mostly it felt like a struggle and a muddle. I’m sorry to say this because I think Kelly is one of the best younger filmmakers around, but this is the kind of difficult film that only an audacious visionary could make.

Set mostly in the beach communities of Los Angeles (with a final act that happens above the streets of downtown Los Angeles) over a July 4th weekend, it’s about various permutations of frenzy, delusion, egoistic fame-seeking, and underground anti-government activity, all of it running rampant after a second 9/11-type attack (a much worse one) occurs in Texas.
There weren’t that many walkouts during the screening (I noticed about 12 or 13) but they were almost all people with soft bellies and gray hair. I don’t know how many tickets Southland Tales (Universal, mid-fall) is going to sell when it opens, but if it makes out at all it’ll be largely due to the GenX-ers and GenY-ers who turned Kelly’s Donnie Darko into a cult hit after it opened in October ’01, despite many critical pans.
< ?php include ('/home/hollyw9/public_html/wired'); ?>
Southland Tales is absolutely not a movie for your average 55 year-old. I’m not saying all younger people will like it, but you can almost certainly scratch the boomers.
I was of two minds. I felt distanced and frustrated by the lack of a clear through-line and a not-simple-enough unfolding (especially in the beginning), and by the sense of insufficient refinement in the story strokes.
But I also felt dazzled and delighted by some of the flights of fancy and fantasy that Southland veers into, especially during the final act. This is a crazy, no-holds-barred, go-for-it Richard Kelly film. And I think vigorously challenging mind-scrambling movies are good for the soul, even if you don’t get everything about them. 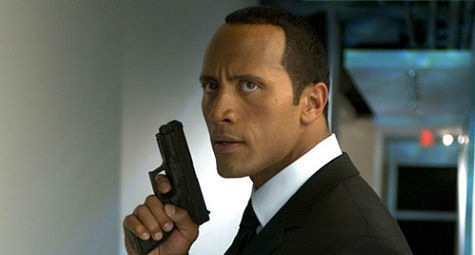 Kelly himself admitted in the post-screening press conference that the film is “a tapestry of ideas” and “an experience of a puzzle,” and that perhaps it will take “a second viewing to comprehend all the intricacies.”
That’s the problem with the film — it’s too dense and complex and ambitious by half.
And the actors — Duane “The Rock” Johnson, Sarah Michelle Gellar, Seann William Scott and Justin Timberlake have the lead parts — have been directed to perform with arch and mannered deliveries, or to act ultra-serious and alarmed with constantly shocked expressions, and so it doesn’t connect on an emotional level. Nothing is allowed to sink in and touch you.
Southland Tales is meant to be a black comedy, but the jokes are on the dry side and under-delivered (which is usually the kind of humor I prefer…except here) and they’re frankly not very funny.

The film is also supposed to be a kind of half-musical, but Kelly doesn’t work enough songs in (only Timberlake has an out-and-out musical number) and Southland could have really used the anchor effect of characters occasionally singing and dancing their butts off.
My opening paragraph makes Southland Tales sound like a bad oppressors vs. good revolutionaries story, but it’s not that simple.
All kinds of ideas, echoes and story elements have been thrown into this puppy, mostly stemming from post-9/11 attitudes and intrigues.
Armed soldiers are on the street, a privately-run big brother outfit called USIDent is checking up on everyone, the environment is heating up badly, two pairs of identical twins (or twin souls) are part of the general plot swirl, and there are a lot of folks getting shot at the end.
There’s also a decelerating globe, a political alliance between an ex-porn star and an action star (i.e., Gellar and Johnson), a conniving neocon political candidate and his flunkies, a power-mad company called Fluid Karma that delivers ocean-driven energy, Santa Monica-based neo-Marxist revolutionaries blackmailing politicians, a mood-altering substance that various characters inject into their necks with a high-tech syringe, veterans of the Iraq War suffering post-traumatic stress disorder…and that’s just for starters.

Southland tales is probably going to get a rough reception from the Cannes critics. I talked to a few of them as we shuffled out of the screening, and I don’t think it’ll be pretty.
Here’s what Kelly has written in the press notes: “Southland Tales is a comedic spin on the apocalypse, as it should occur in the great city of Los Angeles. Trust me on this one…if the end is indeed upon us (apparently 59% of Americans believe that it is), it is going to happen in Los Angeles.”
I thought it a bit odd that only Duane Johnson, Sarah Michelle Gellar and Kelly’s producer Sean McKittrick were on the dais with Kelly at the press conference. The no-shows included Seann William Scott, Justin Timberlake, Chris Lambert, Jon Lovitz and Kevin Smith (who is close to unrecognizable in the film due to a heavy makeup job). 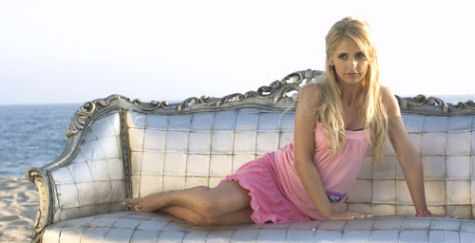 Reservations aside, this is one of those films you have to see just to see how much you can get on the first take. I’m definitely going to take Kelly’s advice and see it a second time.
But Kelly should consider doing a re-edit before showing it again at a major festival. I think there’s a slightly better movie inside the one I saw this morning. And if he does a re-edit, he should consider cleaning up the beginning and make it simpler and more straight-arrow and with less plot thrown at the audience so early on.