Funny, but the most visually arresting aspects of Poseidon in IMAX are the early dialogue-exposition scenes. They’re the most fully lighted and therefore the most detailed and pleasing to the eye. I have never seen blue eyes that look more liquid Technicolor than Josh Lucas ‘s — they’re so vivid in the IMAX print they almost look like some kind of CG visual effect. 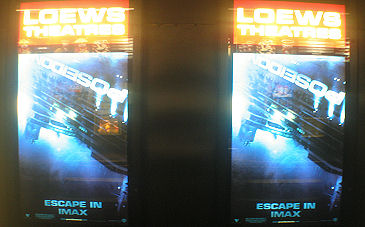 Once the upside-down, swimming-around stuff begins the light levels go down and there’s less to feast on because it’s all water and shadows and source lighting and flashlight beams. It’s startling how brisk and to-the-point this $160 million film is, in a way — 98 minutes. It’s a well-jiggered ride that forbids even the slightest dilly-dallying. Not much is provided in the way of poetry or soul or echoes, but the way it unfolds is certainly a tribute to the German-engineer efficiency of director Wolfgang Petersen. I detected a fairly satisfied vibe after last night’s Leows Lincoln Square IMAX screening ended. There was a guy who was half-laughing and half-moaning to his girlfriend about the most startling scene, which I will get into in my coming spoiler piece this weekend about the rules of disaster-movie deaths. (This is the second warning.) The “money” line in this scene is stunning in its heartlesness. It’s the one that everyone will mention when they talk about Poseidon over the next week or two — “Shake him off!”