In tribute to the opening of Sydney Pollack‘s Sketches of Frank Gehry (Sony Classics, 5.19), which is easily one of the most spiritually uplifting films you’ll see this year (and I mean this), I did a phoner with Pollack a couple of weeks ago to recap and go over things. 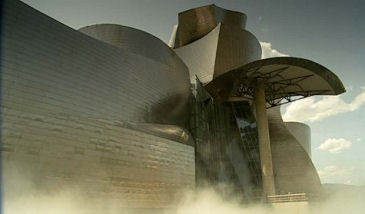 The sound file is sufficient, but here’s the piece I did eight months ago after first seeing Sketches at the Toronto Film Festival. I called it “a stirring, hugely likable portrait of the most daring and innovative architect of our time,” and said that “as corny as this sounds, Sketches left me with a more vivid feeling of celebration and with more reasons to feel enthused and excited about life than anything I’ve seen so far at this festival. It’s a film that lets you into the head of a genius in a very relaxed and plain-spoken way, and it lets you share in the sense of being a person of Gehry’s magnitude — a guy who has created a kingdom out of a supreme confidence in his dreams, but at the same time someone honest enough to admit he doesn’t precisely know what he’s doing much of the time. This is partly due to Gehry having been very open and unguarded with Pollack as the doc was being shot, and partly due to Pollack having sculpted this film in a way that feels more personal and congenial and relaxed than your typical portrait-of-a-noteworthy-person movie. And yet Pollack doesn’t relent in passing along all the information we need to know about Gehry. It’s all done with total thoroughness and clarity of purpose.”