It’s taken him years, but George Lucas has finally capitulated to the middle-aged Star Wars purists (i.e., fans who were tweeners or teeners in May 1977, when the installment later known as A New Hope first opened) who hated the “Greedo shoots first” revision and some of the other add-ons. 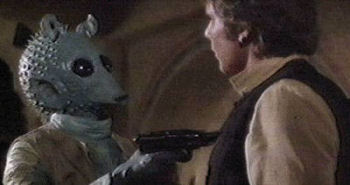 On 9.12.06, the original theatrical versions of Star Wars, The Empire Strikes Back and Return of the Jedi will be released as part of a new DVD package that will also include the 2004 digitally remastered versions. Only an insulated Jabba who lives in his own realm would have neglected to offer the original versions a long time ago in DVD. It took Lucas way too long to come around, but at least he came around. It’s possible that the making of large crateloads of money was a major factor in the Lucasflm’s decision to release these versions, but what can you expect from Lucas, the new “I love the indie camp” guy or, if you prefer, the new Gregg Araki.