L.A. Weekly critic Scott Foundas says that there seems to be a general downgrading of press passes this year. One senior-evel critic who’s always rated an elite white pass has this year been given a pink-with- yellow-pastille pass, and some in the pink-with-yellow-pastille fraternity have been downgraded to straight pink. (That’s me…pink all the way.) 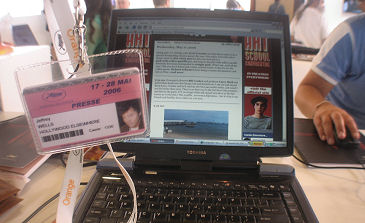 The next level below pink is blue, and the lowest-of-the-low are the yellow passes. Richard Schickel is here doing a Cannes documentary and not a a Time critic, so he has a yellow pass. (I saw him waiting last night to see The DaVinci Code and I went over and said, “Hey, Dick…is this the pink-with-yellow-pastille line?” Schickel kind of half-scowled in his usual charming way and said, “Uhnn…no.”)