MSNBC’s Eric Lundegaard is calling Mission: Impossible III a “fun movie, the best of the series,” in part because “it gets rid of that awful, floppy Hong Kong hipster haircut Ethan Hunt sported in the [John Woo] film.” If you read his article, you should know in advance that a fairly significant M:I:3 plot spoiler is contained within. 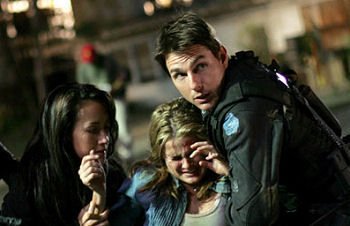 And yet Lundergaard has written it and it’s out there…whaddaya gonna do? Kids in Mumbai and Fairbanks and Panama City are mulling it over as we speak. SPOILER ALERT: What is Lundergaard’s Big Spill? A traitor-mole is a significant plot element in all three IM films, and going back to the same well over and over is a problem. “Which is why I√É¬¢√¢‚Äö¬¨√¢‚Äû¬¢m urging Congress to look into IMF,” Lundegaard concludes. “Call a bi-partisan commission. Get Richard Ben-Veniste on the line. Three movies and three traitors is enough.”