What’s everybody thinking about the World Trade Center trailer? I for one hate the music. It reeks of blah-blah reverence and soulful uplift and sensitivity. Parts of it feel almost Bruckheimer-ish in the worst syrupy way. 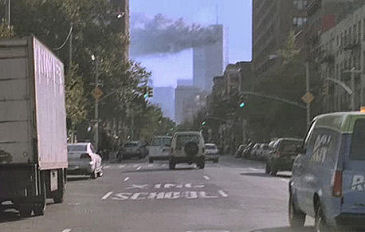 Beware, I say, of any film about a horrific situation — a film that wouldn’t have been made, let’s face it, were it not for the death and destruction backdrop — that has footage of husbands, mothers and kids hugging each other in bed while heartfelt “love is forever” music plays on the soundtrack. Beware of this! A friend wrote this morning and say the “who’s with me?” scene made him laugh out loud. The slow-motion “runnnn!” scene was a bit of a problem for him also. It looks like a professionally made A-level film, yes, but I’m getting a really funny feeling about this one…I really am.